✱✱Book Review✱✱ Blog Blitz: Back in a Spell by Lana Harper 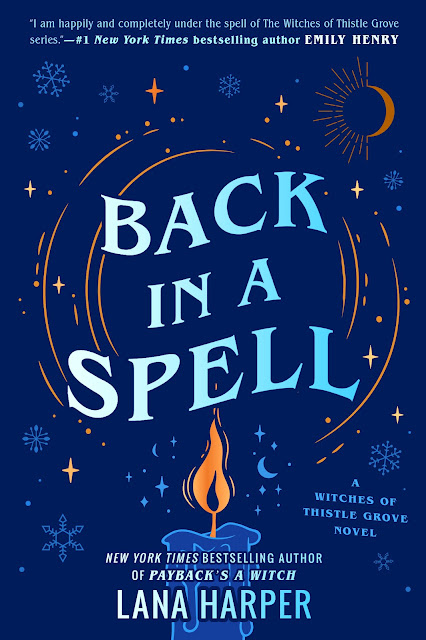 An awkward first date leads to a sparkling romance between one of the most powerful witches in town and a magical newbie in this rom-com by Lana Harper, New York Times bestselling author of Payback’s a Witch.
Even though she won’t deny her love for pretty (and pricey) things, Nineve Blackmoore is almost painfully down-to-earth and sensible by Blackmoore standards. But after a year of nursing a broken heart inflicted by the fiancée who all but ditched her at the altar, the powerful witch is sick of feeling low and is ready to try something drastically different: a dating app. At her best friend’s urging, Nina goes on a date with Morty Gutierrez, the nonbinary, offbeat soul of spontaneity and co-owner of the Shamrock Cauldron. Their date goes about as well as can be expected of most online dates—awkward and terrible. To make matters worse, once Morty discovers Nina’s last name, he’s far from a fan; it turns out that the Blackmoores have been bullishly trying to buy the Shamrock out from under Morty and his family. But when Morty begins developing magical powers—something that usually only happens to committed romantic partners once they officially join a founding family—at the same time that Nina’s own magic surges beyond her control, Nina must manage Morty’s rude awakening to the hidden magical world, uncover its cause, and face the intensity of their own burgeoning connection. But what happens when that connection is tied to Nina’s power surge, a power she’s finding nearly as addictive as Morty’s presence in her life?

Praise for the Witches of Thistle Grove novels by Lana Harper

“I am happily and completely under the spell of The Witches of Thistle Grove series.”

“The third in Harper's 'Witches of Thistle Grove' series is just as suspenseful and action-packed as the first two installments.”

“These books are intensely queer, honest, and essentially kind. I adore them so.”

“With each book in the series, Harper's characters and community inspire more delight.”

“The only flaw in Lana Harper's magical, whimsical, sexy-as-hell The Witches of Thistle Grove series is that I can't set up shop in Thistle Grove myself right this second! These books truly do cast a spell.” 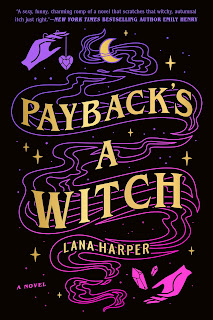 Praise for Payback’s a Witch

“The sexy Sapphic modern Gothic I didn’t know I needed…fresh, sharp, and often frankly hilarious…a perfect winter read, highly recommended for one of the longest nights of the year.

“This magical joyride manages to feel both vibrantly current and timelessly mystical while avoiding the typical queer rom-com stereotypes.”

“The bonds of both family and friendship shine from start to finish, and Harper balances the different clans and captures how, together, they make Thistle Grove the magical place that it is.” 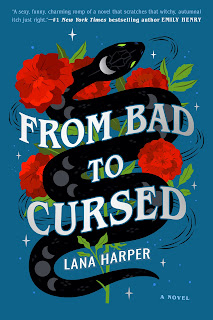 Praise for From Bad to Cursed

“Enemies-to-lovers set among rival witch families in a magical town—say no more.”

I fell in love with Lana Harper's The Witches of Thistle Grove Series from the first book, and I still can't get enough of this magical town. Like its predecessors, Back in a Spell is fast-paced, witty, sexy, and loads of fun. Lana Harper's descriptive writing paints a vivid picture of Thistle Grove and its inhabitants, and we even get to visit with some from the first two books. It's like catching up with old friends! This book focuses on Nina and Morty, and even with a rocky start, they have chemistry. Boy, oh boy, do they have chemistry. Of course, it's going to take more than good chemistry to get to a happy ever after for this pair, especially with Nina's new heightened powers - powers that can be addictive as well as troublesome. So, if you haven't been introduced to this magical world, I highly recommend a visit to Thistle Grove. It's a place you'll want to visit again and again. I know I'm already looking forward to my next trip!

I've never been what one might call a winter person.

Witches are supposed to feel naturally aligned with the Wheel of the Year, receptive to the charms of every season-and nowhere is that easier than in Thistle Grove, where every type of weather is utterly and gorgeously flamboyant, the most extravagant cosplay version of what it might look like anywhere else. In theory, I could appreciate the extremeness of its contrasts; all that diamond-faceted white, blazing against the blue of windswept skies and the stark black silhouette of Hallows Hill. I could even get behind winter chic, when it came to sleek après-ski wear. And then there was Yule, with its fragrant wreaths and crackling logs and sea of candlelight. Arguably the most luminous and magical of the solstices.

But in practice? Winter is horribly inelegant and messy, almost impossible to calibrate. One too many layers leaves you sticky and sweltering, while one too few lets the chill creep into your bones. Your hair turns into kindling, or poufs into a staticky halo immune even to glamour spells. You can't even run properly in winter, unless you're a die-hard marathoner with no self-preservation instincts left intact.

All around cruel and unusual. At least we rarely suffered more than two months or so of such yearly punishment in Thistle Grove.

But this year, strangely, winter seemed to suit me. This year, I found every fresh snowfall soothing, almost meditative. There was one raging right now beyond the frost-rimed window of the Silver Cherry, where I was grin-and-bearing my way through a jewelry-making class; a feathery whirlwind, like being inside a shaken snow globe filled with drifting down. It felt hypnotic, a chaotic escapade of white that made it hard to hold on to any single thought for long. Which, these days, was more than fine by me.

These days, my thoughts and I didn't tend to be on the best of terms.

"Sweetheart," Jessa said, in that delicate tone she'd taken to using on me, like one harsh note might topple me over, damage me in some irreparable way. She didn't have to be quite that careful with me, but I loved that she wanted to be. "You're doing your depressed mime face again."

The words themselves didn't tend to match up with the spun-sugar tone all that often, because she was still Jessa, and I loved her for that, too.

"You know." She rearranged her adorable, ringlet-framed features into a truly dismal expression, drooping puppy-dog eyes and a dramatically downturned mouth like a melancholy bass. "Like you're about to perish of chronic woe. Or possibly planning to re-create that scene from The Giver where the kid and his little brother escape into the snow to die with their emotions."

"It's been a while since middle school English class, but even so, I'm fairly sure that wasn't supposed to be the takeaway," I told her with a snort. "And hard pass on that cold demise. If I absolutely have to die somewhere with my emotions, I'd rather go all nice and toasty."

Dragging my attention back to my little work tray, strewn with a glittery mishmash of wire and beads, I saw that I'd been halfheartedly tooling around with making earrings before the blizzard got the best of me. Once upon a time, I'd have crafted something gorgeous given an opportunity like this, painstakingly applied myself until I had it just right. Too bad "once upon a time" felt like several eons and an infinity of wrong turns ago.

"Burn you at stake, then, noted," Jessa quipped-though of course, thoroughly normie as she was, my best friend had no idea how close to home that hit. As far as I knew, Jessa had never once seriously considered the notion that our charming postcard of a town really was settled by witches, exactly like Thistle Grove legend would have you believe.

To her, I was just Nina. Best friend and partner in crime from our shared law school days, now in-house counsel to my family's extensive business interests. Not Nineve Cliodhna of House Blackmoore, second in line to the most powerful witch dynasty in Thistle Grove.

"Don't worry, buddy," I assured her. "I do still have considerable will to live. Just not, like, enough zest to care about these earrings, apparently."

Jessa pooched out her lower lip, abandoning the complicated (and suspiciously BDSM-looking) beaded choker she'd been working on.

"But that's the point," she insisted, smooth brow wrinkling with concern. "That's what these classes are for, Nina. We're supposed to be nurturing our creative selves, meeting new people, rediscovering your zest. Unearthing it."

She looked so crestfallen that for the barest moment, I entertained the idea of assembling the pitiful bead hodgepodge into something pretty with a simple transmutation spell of the pumpkin-into-carriage variety, but even more basic. The raw materials were already right in front of me, half-threaded. I could have done it with just a few words, using a single, purely distilled thought as a vehicle of my will.

But that wouldn't have been honest or fair, which was part of the reason I never did magic in front of my best friend. For the safety and the continuing preservation of our town, as per the Grimoire-the spellbook that also held sway over the conduct and governance of Thistle Grove's witch community-only long-term, witchbound partners were permitted access to that secret. And for all that I adored Jessa to pieces, our friendship wasn't the kind of love the founders had had in mind when deciding who should be privy to our magic.

Letting the oblivion glamour that was cast over the town take hold of her, erasing her memory of whatever spell I'd worked, would have felt . . . traitorous. A little gross, even.

And it would have been a cop-out at best. Jessa was the kind of delightful whirlwind of a person who effortlessly transformed strangers into friends-or short-lived partners, as the case may be-wherever she went, and I knew she'd been hoping a little of that joie de vivre might rub off on me. Tonight's jewelry-making class was the fourth hopeful outing of its kind, following a disastrous wine-and-paint night (during which I'd gotten the not-artistically-conducive kind of wasted), an equally catastrophic pottery class that had reminded me of Sydney's love of ceremonial teacups and sent me spinning into a meltdown, and a flower-arranging class that had only managed to unearth memories of the ivory-and-rose-gold palette I'd chosen for the flowers at my own wedding.

A wedding that was never going to happen, much like the perfect life with Sydney that had been meant to materialize thereafter. A life that now seemed not just fictional, but so fantastically unbelievable that I, a flesh-and-blood descendant of the sorceress Morgan le Fay, couldn't conceive of it as a reality.

"You're talking about me like I'm some archeological dig, Jess, and we're troweling for ancient potsherds of joy. What if there's no zest to unearth? What if I'm just a barren wasteland?" I dropped my chin, the familiar, hateful well of tears pressing against my eyes. I was so damn sick of crying at the slightest provocation, like some weepy damsel stuck in a mire of never-ending distress, but I'd apparently won the sob lottery. Team #Leaky4Life over here. "Permanently broken?"

Lana Harper is the New York Times bestselling author of Payback’s a Witch. Writing as Lana Popović, she is the author of four YA novels about modern-day witches and historical murderesses. Born in Serbia, she grew up in Hungary, Romania, and Bulgaria before moving to the US, where she studied psychology and literature at Yale University, law at Boston University, and publishing at Emerson College. She recently moved to Chicago with her family.
at January 08, 2023