The King by Skye Warren

I've been meaning to read Skye Warren's Endgame trilogy and just haven't had a chance to fit it in. After reading The King, I will certainly be finding the time! The King is the first book in the Masterpiece duet and a spin-off from the Endgame trilogy.

The King is beautifully written in first person POV and is told from the perspective of main character, Penny. It's hard to pick a definite genre for this one. Considering Penny's age, it's not really a romance, but it is very dark and almost fairy-tale like. It also fits into the Suspense genre. There are definitely some disturbing, adult situations, so I would recommend 18+. While the cover doesn't really tell you much about the story, once you've read it, you realize that it certainly fits this tale. 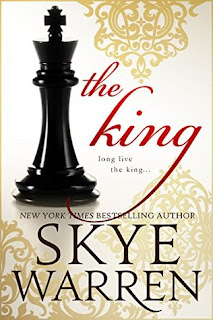 Penny's story is one of loss, love of family, loyalty, betrayal, poverty, finding a friend in the strangest of places, and even a bit of hope. Her childhood is heartbreaking as she practically raises herself, and then as she enters her mid-teens, it becomes absolutely horrifying. For those with triggers, there are some truly disturbing things mentioned in this one. Just an FYI, Penny's ordeal isn't played out on the page in detail, but you get enough later to know what she's gone through.

Warren's talent shines in this one as she takes the reader on an emotional roller coaster ride in which Penny and Damon are prominent. Damon, while certainly not a good guy, shows that he can be protective and even loyal, and you can't help but love him.

This gripping tale sucked me in from the very first page and still hasn't let go. While Penny and Damon's story didn't exactly come to a conclusion, it's not a horrible cliffhanger either, and I will be anxiously awaiting the rest of their story!

The King is available for purchase and you can find it at the following links.

Thanks for joining me! My next read finishes up a beloved series!