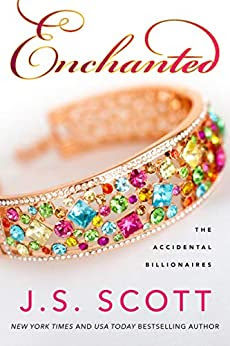 Opposites resist—and attract—under the Cancún sun in this emotional Accidental Billionaires novel by New York Times bestselling author J.S. Scott.
Years ago, Noah Sinclair promised his dying mother that he’d stay strong and work hard for his younger brothers and sisters. Even with the Sinclairs’ newfound wealth, Noah has never steered from that blue-collar drive. His siblings think it’s time—with the gift of a Cancún vacation. To Noah, being forced to relax isn’t bliss. It’s a chore. Especially under the watch of a beautiful family friend enlisted to make sure every laptop under the sun stays closed.
All Andie has to do is convince a handsome billionaire to take a deep breath? It should be a dream for the bohemian travel writer. If Noah—a workhorse so resistant to change—weren’t spoiling for a fight. But no matter how hard Noah pushes her away, Andie is pushing back. She promised she’d teach Noah to embrace every pleasure in life. It’s a promise she made to herself once, too.
What begins as a battle of wills becomes a chance for Noah and Andie to open their hearts and share their fears. Night after intimate night. It’s the last thing they expected from Cancún, and it’s what they need the most. Even if it isn’t supposed to be forever.

Ah, Noah and Andie. It was so easy to get lost in Noah and Andie's love story. And make no mistake, this one is very much a love story. No matter their differences, these two just fit. The story is full of all the things we expect from JS Scott - the wit, the chemistry, the steamy goodness - but this one hit me on a personal level with the emotion. I won't go into details so I don't spoil anything, but Andie's secret really hit home for me, which made me root even harder for this pair who had already won me over. This whole series of Accidental Billionaires has been full of terrific characters and wonderful couples, but I have to say that Noah and Andie have moved into the top slot for me. The series only has one more Sinclair to go, and I'll be interested to see where things go for that one. And yes, it is a connected series, but each book focuses on a new couple, so they do stand alone, although once you've met this clan in any of the books, you'll want more of them.