✱✱Book Review✱✱ Gone With the Rogue by Amelia Grey 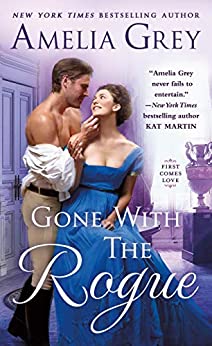 A powerful handsome rogue finally meets his match in Gone With the Rogue, the second book in the First Comes Love series from bestseller Amelia Grey.
She had an acceptable marriage of convenience. Now widowed, can this determined and beautiful mother find true and forever love?
The sinking of the Salty Dove took her husband’s life—but it didn’t drown Julia Fairbright’s courage to endure. She creates a proper life for herself and her young son. But now, the ton’s most notorious rogue is back, and how he makes Julia feel is anything but proper. She can’t deny the desires he awakens in her, even though she knows that the handsome devil will surely break her heart.
Garrett Stockton owns a successful shipping company and is rumored to have a woman on every continent and half-a-dozen in England. The truth, however, is that Garrett has but one mistress: the wide open sea. That is, until he meets Julia, whose spirit of independence matches his own. What begins as a flirtatious battle of wits turns far more passionate than either of them could have imagined. Suddenly, Garrett’s only desire is to sail into the sunset with Julia as his wife and young Chatwyn his son. But she won’t take his hand—how can he convince her that his love is real and his heart is hers?
Goodreads          BookBub

Gone With the Rogue is a sweet romance with an instant attraction that builds as the story progresses. It is part of a series, but I didn't have any problem following the story, so it does stand alone. It's well-written and the couple of intimate scenes are more about the emotions, so it's not overly descriptive or graphic. I did like that our hero is all about the heroine from the time they meet, so we don't have any of the running from the relationship angst. What I didn't care for was all the build-up about the Duke. I get it, that's the source of the angst and as a plot device, it works pretty well - except there's all the tension and buildup for a rather simple conclusion. It just fell a bit flat for me. Nevertheless, the story was entertaining for the most part, and it was certainly a good bit of escapism, so it was worth the read.