The Apartment
by K. L. Slater 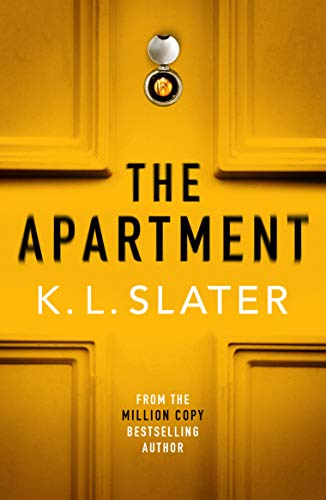 It’s an opportunity she can’t refuse. The woman before her tried…

Freya Miller needs a miracle. In the fallout of her husband’s betrayal, she’s about to lose her family home, and with it the security she craves for her five-year-old daughter, Skye. Adrift and alone, she’s on the verge of despair until a chance meeting with the charismatic Dr Marsden changes everything. He’s seeking a new tenant for a shockingly affordable flat in a fashionable area of London.

Adder House sounds too good to be true… But Freya really can’t afford to be cynical, and Dr Marsden is adamant she and Skye will be a perfect fit with the other residents.

But Adder House has secrets. Even behind a locked front door, Freya feels as if she’s being watched: objects moving, unfamiliar smells, the blinking light of a concealed camera… and it’s not long before she begins to suspect that her dream home is hiding a nightmarish reality. Was it really chance that led her here—or something unthinkably dark?

As the truth about Adder House starts to unravel, can Freya and Skye get out—or will they be locked in forever?

The Apartment was kind of what I expected but not in a good way. When you read as much in the thriller genre as I do, there isn't much that I haven't seen, so I had an idea of what I was going to get from this book. That said, I was really hoping for more, and it had the potential to be more. So, yes, it is predictable, but there are so many other things that could've made this story stand out from the crowd - the characters, the creepy vibe, the wow factor in the conclusion. And it comes up short all the way around. I get that Freya needed to be a certain way for the story to work, but she's just unbelievably naive. Considering her background, her actions are contradictory at best, and the story relied on her being way too slow-witted to be believed. Then we have the creepy vibe that could've been there. Sadly, that was completely missing in this one. And the conclusion? Well, I just didn't buy it. None of it. Plus, we have unanswered questions that were just another irritation in a whole book of irritations. In the end, I think it's safe to say that this one definitely was not for me.