✱✱Book Review✱✱ To Have and to Hoax by Martha Waters

To Have and to Hoax
by Martha Waters 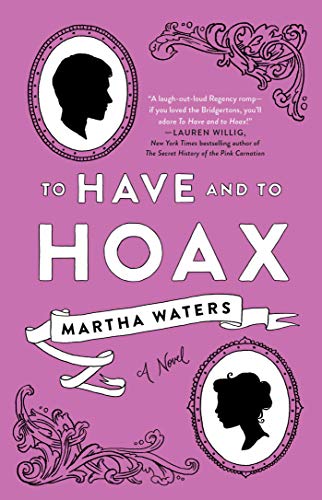 Named a Best Romance of April by Goodreads, Popsugar, Bustle, and more!

In this fresh and hilarious historical rom-com, an estranged husband and wife in Regency England feign accidents and illness in an attempt to gain attention—and maybe just win each other back in the process.

Five years ago, Lady Violet Grey and Lord James Audley met, fell in love, and got married. Four years ago, they had a fight to end all fights, and have barely spoken since.

Their once-passionate love match has been reduced to one of cold, detached politeness. But when Violet receives a letter that James has been thrown from his horse and rendered unconscious at their country estate, she races to be by his side—only to discover him alive and well at a tavern, and completely unaware of her concern. She’s outraged. He’s confused. And the distance between them has never been more apparent.

Wanting to teach her estranged husband a lesson, Violet decides to feign an illness of her own. James quickly sees through it, but he decides to play along in an ever-escalating game of manipulation, featuring actors masquerading as doctors, threats of Swiss sanitariums, faux mistresses—and a lot of flirtation between a husband and wife who might not hate each other as much as they thought. Will the two be able to overcome four years of hurt or will they continue to deny the spark between them?

With charm, wit, and heart in spades, To Have and to Hoax is a fresh and eminently entertaining romantic comedy—perfect for fans of Jasmine Guillory and Julia Quinn.
Goodreads          BookBub

To Have and to Hoax has a great premise that falls a bit short on the delivery. The beginning was sweet and fun, and I also liked the initial antics between Violet and James, but I think this one could've done with a dose of less is more. Those amusing antics aren't nearly so amusing when they continue to go on and on and on. What it all boils down to is a whole lot of miscommunication or complete lack of communication, both of which went on for much too long - long enough to get a bit tedious. Maybe things would've been different had we been told what caused the rift earlier in the story or maybe not, but too many things just didn't work in this one. For starters, how this couple went four years without communicating. Four years? That's taking the silent treatment to a whole new level. Don't get me wrong, there is some really good writing here, but the story was just way too much. I love romantic comedy, and I can get behind silly situations, antics, and banter, but roughly 350 pages of it without a resolution in sight was more than I could take. Basically, this one is a mildly amusing romantic comedy that went on for much longer than necessary.