✱✱Book Review✱✱ Inked with a Kiss by Jennie Davids

Inked with a Kiss
by Jennie Davids 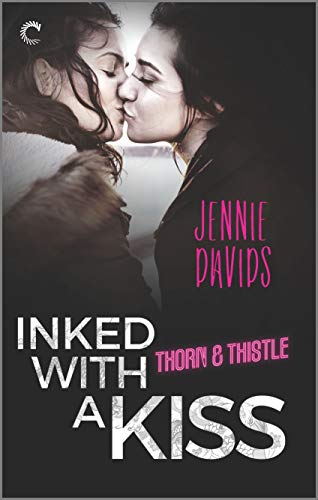 “This moving and deeply fulfilling romance marks the launch of a very promising series.”—Publishers Weekly, starred review (on New Ink on Life)

Sometimes everything you shouldn’t want is exactly what you need.

Tattoo artist Jamie Winston is used to caring for others. Between her assistant manager position at a tattoo parlor, single-parenting her twelve-year-old daughter, and supporting her alcoholic parents, Jamie rarely prioritizes her own needs—unless Sierra Clark is in her chair. The bubbly, younger woman somehow manages to make Jamie feel like the carefree teenager she never got to be, making anything seem possible.

For Sierra, time with Jamie is a much-needed escape. She takes her work as a social worker seriously, but with budget cuts threatening her job, there’s a lot riding on the fundraiser she’s planning with Jamie. The fact that it means working closely with the sexy, older tattooist is a bonus—a deliciously tempting bonus. Sierra isn’t one for relationships, but she’s never felt such a strong desire to mix business with pleasure.

Sizzling chemistry quickly erodes Jamie’s fears of being too old for Sierra, but navigating a romance with someone who’s at such a different stage in life is no easy task. They’ve each come to rely on themselves more than anyone else, but having a future together will mean letting their guards down, and accepting each other as a safe place to fall.
Goodreads          BookBub

Inked with a Kiss is my first read by Jennie Davids and the second in a series. That said, the book does stand alone as far as I could tell. At least, I didn't notice any glaring details I felt like I missed as I read Sierra and Jamie's story. On the technical side, the book is well written, and the pacing is pretty steady with no serious lags in the book.
Good pacing aside, I still struggled with parts of this one. I usually enjoy a good age gap romance, and while 12 years can be considered as a pretty big gap, I felt like there was a bit too much emphasis on Jamie's age here. She's 37 - seriously, 37, not ready for retirement, but it gets a lot more attention than necessary. Cutesy jokes aside, once it's established that the age difference isn't a problem, that should've been enough if it's not going to be used as a source of conflict.
The other issue for me lay in Jamie's big turn around. I expect some character growth, especially when it comes to characters who are as gun shy of relationships as these two, but there's one part of Jamie's character that makes a pretty dramatic change, and it just didn't ring true. Not that it wasn't a good thing because this particular change is certainly needed, but it comes way too abruptly. Given the backstory, I suppose it's really a long time coming, but I don't buy it - I found it hard to believe that the change would be so complete, so quickly. Of course, it was needed to give us the big conflict between the characters so we can worry about a happy ending, and that propels us to the big get it together gushy moment, but it just didn't feel right to me. It's kind of like there's no middle ground for Jamie. It's all or nothing with no room for a happy medium, a balance in her life.
Nevertheless, I did find both Sierra and Jamie likable, and there were some great moments between them. The book also touches on some serious topics, and Jennie Davids strikes a pretty good balance between getting too angsty and not angsty enough. In the end, there were things I liked and things I didn't about this one. I didn't love it, but I did like it, and I would check out other books by this author.