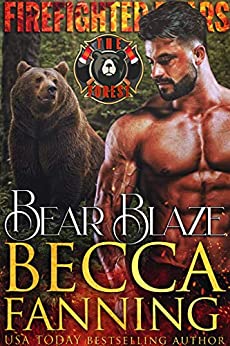 The spotlight can burn like any flame.
Tom Buckner watches as his friends--his brothers of The Forest--move on with their lives. All of a sudden, he doesn't quite fit in with them anymore.
Jessica Andrews is a news anchor who's just landed her biggest break: tell the story of the Shifters, starting with the members of The Forest. She's supposed to be an impartial source, but Jess knows what her boss wants--drama, and lots of it.
Jess convinces Tom to take her out--off the record--and, to both of their surprise, they find themselves hitting it off. But Tom knows what a relationship with Jess would do to his already strained situation at the station, and Jess knows to do her job, and do it well, means betraying Tom.
Jess interviews Tom for her special, and all seems to go well, with the two of them getting closer than ever. Then the special airs, and Tom sees how Jess cut his answers and made the Shifters appear deranged and dangerous. But as much as he wants to hate her, he can't. He knows she did it for the job, a job she loves more than anything. But Jess is overcome with guilt over it, and as much as Tom tries not to think about her, she tries even harder not to think about him. But she can't do it...
USA Today Bestselling Author Becca Fanning is excited to bring you the fourth Firefighter Bears fated mates novel! Things are going to get hot!

Bear Blaze brings us Tom and Jessica, and these are two of the toughest nuts to crack in the series. Tom has a pretty bad case of the poor me syndrome, and Jessica - well, Jessica is not an easy character to like. In fact, I was definitely in the don't like Jessica camp for a good portion of this book. The thing that kept me turning the pages was past experience with this author and this series. I'll admit, I was a little worried about this one. I just wasn't sure even Becca Fanning would be able to turn it around enough for Jessica to find redemption. And I'm not going to give it all away now either. I will add that we get some page time with past favorites in the series, which is always great, and the story has a good pace and some interesting turns. I did end up looking back over the story once I'd read the last page and realizing that I enjoyed the journey even more than I thought in the moment.

Deep As the Ocean Tour and Giveaway

Deep As the Ocean The Pinkerton Man Series Book 4 by C.J. Baty Genre: Historical Mystery LGBTQ Romance What started as a vacation fo...