Claim the Dragon
A Dragon Shifter Romance
The Legion
by A.C. Arthur 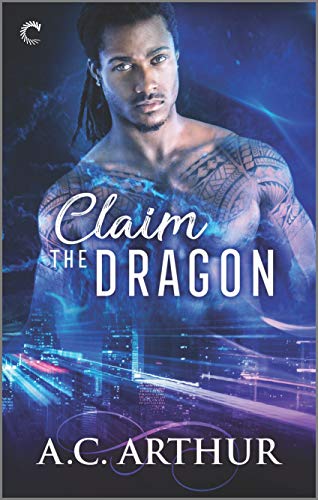 To save her, he’ll sacrifice everything.

Born a dream reaper, Steele Ezo, a powerful half dragon, half human, is struggling to find his place in the Drakon hierarchy. He is ready to accept his fate until he realizes the next victim on the Reaper’s hit list is the sexy thief who’s caught his eye.She’s supposed to die.He’s forbidden to stop it.But their inexplicable connection makes it impossible to step aside.Abandoned by her family and abused by local enforcers, Ravyn Walsh lives life on her own terms. She’s created an underground sanctuary for the oppressed citizens of Burgess, and she needs funds to keep it running. When a lucrative job—stealing an ancient dagger—lands in her lap, she doesn’t hesitate, not even when a smoldering tattooed stranger attempts to stop her.A dagger that can raise the dead is a powerful tool—one that could change the course of history. As they fight to keep the dagger out of the wrong hands, Ravyn will be forced to embrace the truth of her heritage, while Steele will find himself torn between saving a life that isn’t meant to be saved and denouncing the power he was born to wield.

Momma Says: 3 stars ⭐⭐⭐
First things first, I did not realize that this was part of a series until I started reading. Sometimes that works out okay and sometimes not - this one falls into the latter category. There were several things that left me a bit confused for about half the book. That said, I did finally figure it out, and I was able to enjoy the rest of the book, but I would recommend starting with the first book and moving on from there. Honestly, I think this one leaned a little too heavily toward science fiction, which isn't a genre I read very often, so I maybe didn't get into this book as easily as some. Nevertheless, the book is well done, maybe a little too fast on the pacing, but still an entertaining read once I understood some things. In the end, the story was entertaining and the characters were engaging. I did enjoy the second half, so I would advise sticking with it if you're like me and jumping in later.
❃❃ARC provided by NetGalley and Carina Press