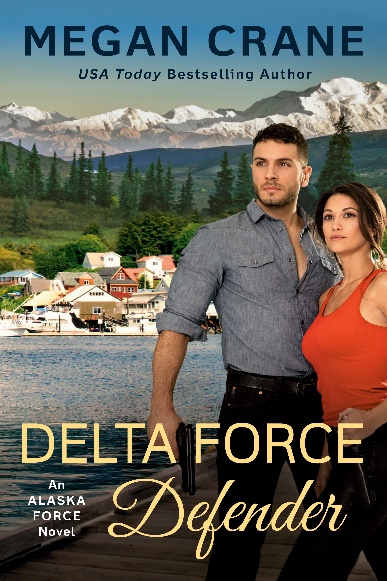 After an explosion that should have killed her, Caradine barely escaped her criminal family by leaving her old identity behind. These days she runs the Water's Edge Cafe in a rugged little town on the edge of nowhere, vowing never to let anyone close to her again.

After his career in the military, Isaac is back home playing the part of an unassuming local in Grizzly Harbor, while also overseeing Alaska Force's special ops work as the founder and commanding officer he once was in the Marines and beyond. He has better things to do than obsess over a woman who claims she hates him, but every glimpse he gets of the vulnerability beneath her prickly exterior is a distraction . . . and a challenge he can't ignore.

When Caradine's demons catch up with her, her cafe isn't the only thing that blows up. Her past pushes them together, and closer to a future that's been waiting for them all this time. They just have to survive long enough to enjoy it.

Momma Says: 4 stars ⭐⭐⭐⭐
Delta Force Defender is a fast-paced romantic suspense set in beautiful Alaska, and to be honest, I think I loved the setting as much as the romance and the suspense. Megan Crane does an excellent job of transporting you to this small town in Alaska. The romantic couple was intriguing to say the least. Isaac and Caradine are both strong characters and with that comes a fair amount of butting heads, mostly because Caradine is indeed prickly, just like the blurb says. Granted, she has good reason to keep people at a distance, but it does become a bit much at times. Nevertheless, the story is a good blend of romance and suspense, and it comes together for a hard to put down book. This is the fourth in a series, but I had no problem following the story, so I would say it works well as a standalone. I will add that after meeting the characters in this one, I'll be checking out the earlier books in the series.
❃❃ARC provided by NetGalley and Berkley