The New Girl
by Harriet Walker 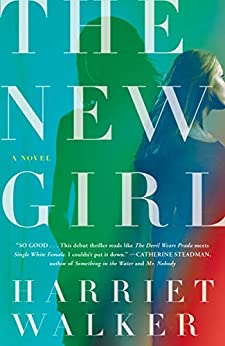 “This debut thriller reads like The Devil Wears Prada meets Single White Female. I couldn’t put it down.”—Catherine Steadman, author of Something in the Water and Mr. Nobody
She’s borrowed your life. But what if she decides to keep it?
Glamorous Margot Jones is the fashion editor at glossy magazine Haute. Pregnant with her first child, Margot’s carefully curated life is the object of other women’s envy—who wouldn’t want her successful career, loving husband, beautiful house, and stylish wardrobe?Maggie, a freelance journalist, certainly knows she doesn’t measure up. But when she gets the temp job covering Margot’s maternity leave, Maggie seizes the chance to live a flashier life—even if it’s only for a few months.But the simultaneous arrival of Margot’s baby and a brutal end to her oldest friendship sends Margot into a spiral of insecurity and suspicion; normal preoccupations of new motherhood turn into dark and frightening paranoia. Who is the vicious online troll mocking Margot’s facade of perfection and threatening to expose a dark secret she’s spent years concealing? Are Maggie’s newfound ambitions and plucky enthusiasm as innocent as they seem? And what happens when Margot is ready to return to her old life—especially if Maggie doesn’t want to leave?

Momma Says: 2 stars ⭐⭐
The New Girl is a debut thriller that turned out to be more women's fiction than thriller. I think Goodreads even referenced Hitchcock, so I was all geared up for that vibe, that feeling that keeps up turning the pages looking for the twist. Except that this one started out way too slow for any of that, and it kept with the slow pace for about half the book. So much so that I ended up setting this one aside several times just trying to get to a point of something really happening. Things do finally pick up some in the second half, but it's still weighed down with wordy passages and descriptions that were - well, a little too descriptive. I'm all for setting a scene, but there's a limit. When it starts to feel like filler, it's just too much. There is a secret to be uncovered, but it's really not worth all the build-up to get to the reveal, and in itself was a bit disappointing. In the end, it just felt like the book went here and there and yon, but the pieces didn't quite make it back together for a cohesive tale. The premise certainly had potential, but it missed the mark for me.
❃❃ARC provided by NetGalley and Ballantine Books