"Masterful. Magnificent. A passionate story of survival and a real page turner. This story will stay with me for a long time." —Heather Morris, author of The Tattooist of Auschwitz and Cilka's JourneyLiving through World War II working in a Paris bookstore with her young daughter, Vivi, and fighting for her life, Charlotte is no victim, she is a survivor. But can she survive the next chapter of her life?Alternating between wartime Paris and 1950s New York publishing, Ellen Feldman's Paris Never Leaves You is an extraordinary story of resilience, love, and impossible choices, exploring how survival never comes without a cost.The war is over, but the past is never past. 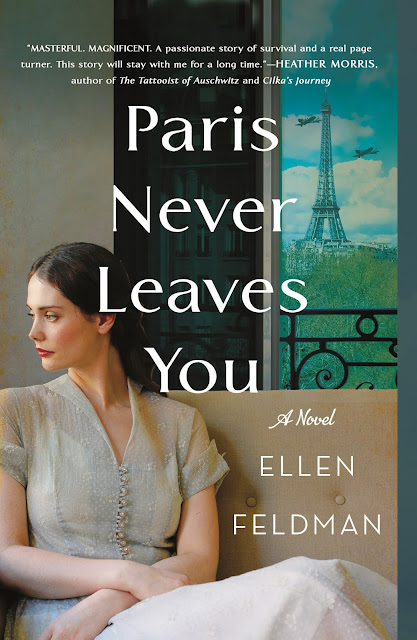 Momma Says: 3 stars⭐⭐⭐
Paris Never Leaves You is as much historical romance as historical fiction or women's fiction, which works for this story. The storyline is emotional, and it's impossible to read about Charlotte's determination to survive and protect her daughter without feeling the emotion of the story. Ellen Feldman did a great job of showing Charlotte's survivor's guilt as well as her relationship with her daughter. The story moves between two timelines, and while the switch was sometimes a bit abrupt, both timelines were interesting. The story is easy to follow, and the characters are well-drawn and made me want to see how things would come out for them. All in all, Paris Never Leaves You is an engaging historical romance from Ellen Feldman. It's well written, and I would check out other books by this author. 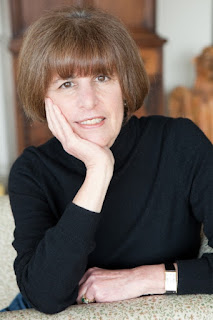 Ellen Feldman, a 2009 Guggenheim fellow, is the author of Terrible Virtue, The Unwitting, Next to Love, Scottsboro (shortlisted for the Orange Prize), The Boy Who Loved Anne Frank (translated into nine languages), and Lucy. Her last novel, Terrible Virtue, was optioned by Black Bicycle for a feature film.

Charlotte spotted the letter as soon as she stepped into her office. There was no reason it should have caught her eye. The desk was littered with papers and envelopes. Stacks of manuscripts and books filled the shelves of the small cubicle and spilled over onto the two chairs. Certainly the airmail envelope didn’t make it stand out. Most of the books she published were American editions of European works, and a good deal of her mail arrived in those tissue-thin blue envelopes. The only explanation for its attracting her attention was that she’d already gone through her morning mail and the afternoon delivery hadn’t yet arrived. Perhaps the letter had gone to another editor by mistake, and he or she had left it on Charlotte’s desk while she was upstairs in the art department. Or perhaps the mailroom had overlooked it in the morning sorting.

Gibbon & Field was a prestigious publishing house, but a certain loucheness lurked behind the scenes. That was the fault of Horace Field, the publisher. He was too forgiving, or perhaps only cannily manipulative. She’d had her earliest inkling of the trait the first Christmas after she’d come to work at the house. Leaving the office one evening at the same time, she and Horace had entered the elevator together to find a young man from the production depart- ment struggling to balance two or three oversize art books and several of a more conventional trim size. When he saw Horace, he colored an unhappy Christmas red.

“I see you’ve taken our ads to heart, Seth,” Horace said. “‘There’s a book for everyone on your Christmas list.’”

The young man turned a deeper red and shot out of the elevator as soon as the doors opened. That was un- usual. The staff usually deferred to Horace getting on and off elevators, and everywhere else.

“Are you going to take the books out of his salary?” she’d asked as they’d followed him across the lobby.

“It would teach him a lesson.”

“The only lesson I want to teach him, Charlie, is to work his tail off for the greater glory of G&F.”

“And you think encouraging him to walk out the door with an armful of purloined books will do that?”

“I think the next time he asks for a raise and doesn’t get it, he’ll remember all the books he’s filched and feel guilty, or at least compensated. Same with the expense accounts the editors and travelers turn in. They think they’re stealing me blind, but a guilty conscience breeds contrition. Maybe even loyalty. They feel they owe the house something in return. That’s why I worry about you. Those expense accounts you file are a travesty. If the other editors get wind of them, they’ll never forgive you for spoiling the game.”

Horace’s philosophy permeated the entire publishing house from the grand larceny of the production depart- ment, run by a man rumored to have ties to the Mafia, to the petty pilfering and general slacking off of the mail- room. That must be why the letter had been delivered late. And the timing was the only reason she noticed it. It had nothing to do with a sixth sense, in which she defi- nitely did not believe.

She sat behind the desk and picked up the envelope. Her name and the G&F address were written, not typed. The handwriting wasn’t familiar. There was no return ad- dress on the upper left-hand corner. She turned it over. As soon as she saw the name, she realized why she hadn’t recognized the handwriting. When had they put anything in writing? No, that wasn’t true. He’d  written her once,  a year or so after the end of the war. The letter had taken months to wind its way through the Drancy records and the various agencies to reach her in New York. She’d taken solace in that. He didn’t know where she was, and he was still in Germany. She’d never answered that letter. The return address on this one was Bogotá, Colombia. So he’d got out after all. She was glad. She was also relieved. South America was still a long distance away.

What troubled her was not where he was but that now he knew where she was. She’d thought she’d been so careful. Neither her address nor her telephone num- ber was listed in the book. The people who had tried to help her settle into her new life—social workers and do- gooders from various refugee organizations; her colleagues here and at other publishing houses; Horace Field’s wife, Hannah—had found the omission foolish and antisocial. “How do you expect to make a life for yourself in a new country,” Hannah had asked, “if no one can find you?” Charlotte hadn’t argued with her. She’d merely gone on paying the small fee to be unlisted. Gradually Hannah and everyone else had stopped asking and chalked it up to what she’d been through. No one, including Hannah, knew what that was, but that didn’t stop them from speculating.

She wasn’t much easier to find in the office, though apparently he’d managed. Her name didn’t  appear  in the list of editors that ran down the left-hand side of the company stationery. Most publishing houses didn’t list editors on the stationery but that was another of Horace Field’s peculiar indulgences. A year after she’d come to work at G&F, he’d asked if she wanted to be included.

“A sop?” She spoke four languages, could read two others, and had taken her degree at the Sorbonne in English literature, but in those days she was still having trouble with some American slang.

“Compensation for the slave wages we pay you.”

“At least you didn’t suggest I make up the difference by stealing books,” she’d said, and added that she didn’t want her name on the stationery but thanked him all the same. Nonetheless, despite her absence in the phone book and on the company stationery, her name did occasionally turn up in acknowledgments in the books she worked on. And my gratitude to Charlotte Foret for steering my vessel safely through the turbulent waters of American publishing. My thanks to Charlotte Foret, who first saw that a book about the Dutch Golden Age written by a Dutchman would appeal to American audiences. The question was how he’d managed to get his hands on a US edition in Europe, or now South America. The various consulates had libraries to spread the American gospel among the local populations, but the books she published rarely spread the American gospel. Nonetheless, he must have found one. Or else he’d tracked her down through a refugee agency. Once in America, she’d distanced herself from the émigré or immigrant or refugee—choose your term—groups, but she’d had to file the usual papers and obtain the necessary documents to get here. She was traceable.

From Paris Never Leaves You by Ellen Feldman. Copyright © 2020 by the author and reprinted by permission of St. Martin’s Griffin.