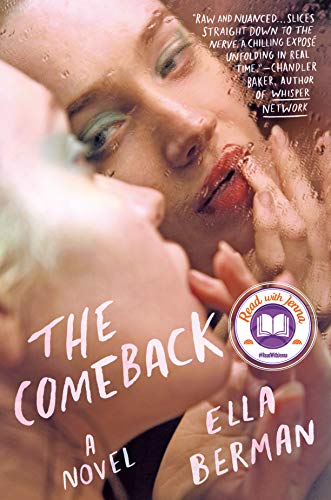 A deep dive into the psyche of a young actress raised in the spotlight under the influence of a charming, manipulative film director and the moment when she decides his time for winning is over.

At the height of her career and on the eve of her first Golden Globe nomination, teen star Grace Turner disappeared.

Now, tentatively sober and surprisingly numb, Grace is back in Los Angeles after her year of self-imposed exile. She knows the new private life she wants isn't going to be easy as she tries to be a better person and reconnect with the people she left behind.

But when Grace is asked to present a lifetime achievement award to director Able Yorke--the man who controlled her every move for eight years--she realizes that she can't run from the secret behind her spectacular crash and burn for much longer. And she's the only one with nothing left to lose.

Alternating between past and present, The Comeback tackles power dynamics and the uncertainty of young adulthood, the types of secrets that become part of our sense of self, and the moments when we learn that though there are many ways to get hurt, we can still choose to fight back.

Praise for THE COMEBACK by Ella Berman

“Raw and nuanced, The Comeback slices straight down to the nerve. A chilling exposé unfolding in real time—I dare anyone to read it without squirming in suspense and in recognition.”

“Ella Berman has created a timely, darkly glittering novel…the kind of book you lose sleep over, and cancel plans for.”—Katie Lowe, author of The Furies

Holy intense, gut-wrenching story! The Comeback is the story of Grace Turner, her rise to stardom, her fall to rock bottom, and everything in between. It's been a long time since I've been so caught up in a character, but Grace's story grabbed hold and held on tight. The story feels very real and it's completely compelling. It's one of those emotional stories that just takes root - if I wasn't reading it, I was thinking about it, and it's a tale that I won't soon forget. I would caution that some parts of this book are quite hard to read, and I think the fact that it feels so real makes it even more so. It's dark, it's prevalent, and it's impossible to put down even when I read parts that made me want to look away. That said, and I'm trying very hard not to enter into spoiler territory, it is called The Comeback, so there is something to hope for. I won't say what, or even how much hope there is, but there you have it. I haven't read a story that's hit me like this one in some time, and I would challenge anyone looking for an intense read to give this one a gander. And I'll finish with this - The Comeback is a debut novel, and as such, Ella Burman has set the bar quite high for whatever comes next.

❃❃ARC provided by NetGalley and Berkley

Ella Berman grew up in both London and Los Angeles and worked at Sony Music before starting the clothing brand London Loves LA. She lives in London with her husband, James, and their dog, Rocky. The Comeback is her first novel.