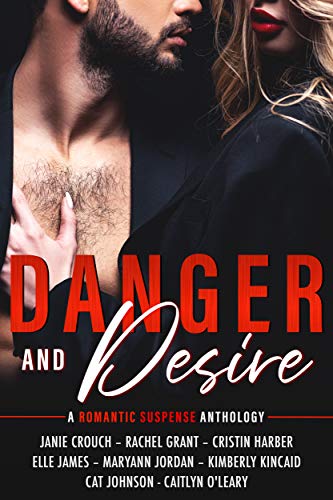 Eight of today’s best-selling romantic suspense authors bring you BRAND NEW stories not available anywhere else! No cliffhangers, new stories, all sizzle! But this collection is only available for a limited time--after September 25, this deal will be GONE!

THE ROOKIE by Kimberly Kincaid
Police recruit Xander Matthews has two goals: to keep his head down and his dark and dangerous past where it belongs--behind him. He never thought he'd see brash, beautiful ADA Tara Kingston again. But now they must catch a brutal killer before it's too late.

SCOUT by Janie Crouch
Linear Tactical’s Wyatt Highfield is running for his life with intel that will break up a human trafficking ring. The last thing he wants is to bring danger to Nadine Macfarlane’s door. The gentle beauty has been through enough, and has the scars—physical and emotional—to prove it. But she’s his only option.

NIGHT OWL by Rachel Grant
Jenna O’Donnell wants only three things: to live in Tamarack, Alaska for the rest of her life; for Ted Godfrey to fall into a glacial crevasse; and Brad Fraser.
Brad Fraser wants only three things: to leave Tamarack, Alaska and never return; for his coworker, Ted Godfrey, to be fired; and to never, ever fall in love.
But Brad tempts fate when he takes Jenna out for a night of owl watching, and once he spends time alone with her, his carefully planned escape from both frigid north and fiery waitress is no longer simple…

THE GUARDIAN by Cristin Harber
After a rollercoaster of headline-grabbing family tragedies, Roxana Carter couldn’t have said yes any faster when her perfectly predictable boyfriend proposed marriage. But the arrival of a mysterious gun-wielding couple reveals that Roxana’s steadfast man isn’t who he seems.

BREAKING AWAY by Elle James
Delta Force Operative navigates dangerous territory when he’s assigned to protect a hotshot war correspondent with a price on her head, who also happens to be the girl who got away.

LEVI by Maryann Jordan
Heading from Wyoming to Maine to take on his new position with Lighthouse Security Investigations, Levi was ready to get off the highway and take the backroads. Offering to help a stranded woman seemed like a good idea until he discovered the secrets she was hiding. With the help of the LSI Keepers, can Levi untangle Claire's problems in time to save her life?

DESIRE IN D.C. by Cat Johnson
They couldn't be more different, but sometimes opposites attract so strongly, there's nothing that can keep two people apart. Not even a deadly terrorist hijacking . . .

LAWSON AND JILL by Caitlyn O’Leary
When Marine Raider, Lawson Thorne is goaded into grief counseling by his Navy SEAL brother, he never expected to meet the woman of his dreams. When he and Jill decide to ditch the group and form a group of their own, sparks fly. But what happens when Lawson realizes Jill has been targeted by a madman?

Momma Says: 4 stars⭐⭐⭐⭐
There's no better way to meet a new author than in an anthology in my opinion. I prefer a mix of familiar favorites and new to me authors so I'm sure to like at least some of what I find. Usually, there will be at least one author or story that will be the draw for me. In this case, I was pretty sure I'd like most, if not all, of the stories enclosed since they're all romantic suspense - one of my favorite genres. This one has 8 novella length books in one, and it amounts to somewhere around 800 pages of - well, as the title says, Danger and Desire. Some are heavier on the danger, and others lean more toward the desire, but they all have some level of both.
The Rookie by Kimberly Kincaid starts with a good bit of excitement and doesn't let up. It's fast-paced, and Xander and Tara have great chemistry. It's a good mix of suspense, danger, and attraction, and ended up being one of my favorites in the collection.
Scout by Janie Crouch was the one that drew me to this collection, to begin with, and another favorite in the collection. As a fan of the Linear Tactical series, I'm always ready to gobble up anything that includes those characters. This one gives us Wyatt and Nadine, along with a few others from the Linear Tactical team. The romance moves a little faster than is typical for the series, but this is a novella, and it's done in a way that is kind of perfect for this couple and their story. It also has the author's usual flair for action and intrigue mixed with some well-timed wit. Many of the characters are from the Linear Tactical series, but Scout can be read as a standalone. I will warn that once you meet any of the characters from this series, you'll want to know them all.
Night Owl by Rachel Grant takes us to Alaska for a bit of romance and owl watching. This one starts as kind of a lust from afar type of thing with it being implied that the attraction has been there for some time but neither Brad nor Jenna have acted on it until now. Brad was a little too wishy-washy for me with his back and forth, 'I want her, but I shouldn't start something with her,' and it grew tedious even in a novella. Of course, that can't hold so we do get some romance, but it's not as suspenseful as I expected. This one also has a sort of open-ended conclusion with a mention of the series, so there is that. This is the only one in the series that had that open-ended vibe. I will say that other than Brad's indecision, the characters and storyline did hold my interest, and the series sounds promising.
The Guardian by Cristin Harber is loaded with secrets that Jason and Roxana are going to need to overcome to get their happily ever after - if those secrets don't kill them first. This is another fast-paced story with a solid mix of romance and suspense. The story is entertaining and engaging, and I will be checking out more of Cristin Harber's work.
Levi by Maryann Jordan starts out a little bit slower than I prefer, especially in a novella, but that doesn't last long, and then we're off and running. The premise is interesting, and I love the idea of a romance blooming during a cross-country trip. Of course, that's not what Levi had planned as he set off for a new job, and he and Claire have plenty to deal with. This is another one with some great characters and an entertaining storyline.
Desire in D.C. by Cat Johnson is another favorite in this collection. I do love me some political intrigue, and this has plenty of that. There's also a romance that blooms despite different political beliefs and some heated debates, at least on one side of that debate - of course, the heat isn't all about different sides of the political arena, and it burns even hotter with the attraction between this couple.
Lawson and Jill by Caitlyn O’Leary was a little harder for me to read. Not because it isn't good, but because I've had my own grief to deal with these past few weeks. At the same time, it was a story that pulled me in, and I ended up liking it a great deal. This pair fits so well together and they do have their own danger to deal with.
All in all, we have 8 stories of romantic suspense, and while I liked some better than others, they were all well worth the read, and in addition to enjoying an author I know and love, I've also found a few more to check out.
❃❃ARC provided by the authors