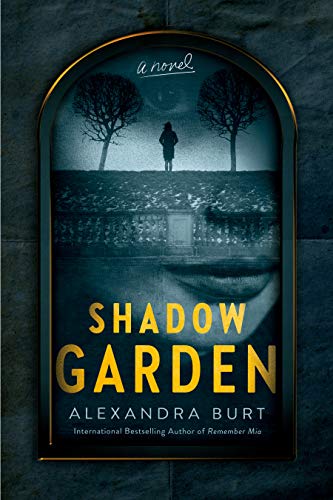 A wealthy woman suspects something is off about the luxurious complex she lives in . . . and she is right, in this riveting domestic-suspense novel from international bestselling author Alexandra Burt.

Donna Pryor lives in the lap of luxury. She spends her days in a beautifully appointed condo. Her every whim is catered to by a dedicated staff, and she does not want for anything.

Except for news of her adult daughter.

Or an ex-husband who takes her calls.

Donna knows something is wrong, but she can't quite put her finger on it. As her life of privilege starts to feel more and more like a prison, the facade she has depended on begins to crumble. Somewhere in the ruins is the truth, and the closer Donna Pryor gets to it, the more likely it is to destroy her.

Momma Says: 4 stars⭐⭐⭐⭐
The cover and title for this one caught my eye immediately. That cover is absolutely haunting, and with a title like Shadow Garden, I thought it just about had to be a doozy of a read. So, I checked out the blurb and went for it. And I realized pretty quickly that what I expected and what this book actually is are two very different things. It is certainly domestic drama, and there is some suspense, but it's a bit too predictable for much of that. Nevertheless, there's something immensely readable about this story, something as compelling as it was frustrating at times. The story is told by three characters, Donna, Edward, and their daughter Penelope, and not a one of them is exactly a reliable source of information. There also isn't a likable one in the bunch, so there's that. However, those things aren't what frustrated me. Unlikable and/or unreliable characters in a story like this are practically a given. What did frustrate me was the jumping back and forth in the timeline with little to no warning. It all feels rather scattered, but the more I read, the more it started coming together, and the more I felt like the style worked for this story. Donna felt scattered, herself, so the storyline reflecting that made sense. What it all comes down to is there were many things about this book that I wouldn't care for in most cases, but Alexandra Burt brings all those things together to create a story that I felt compelled to finish. Even the ending isn't what I would've liked for it to be, but again, it just worked for this book. My advice would be to go ahead and check out that terrific cover, and go ahead and read the intriguing blurb, then wipe the slate clean, and forget them both. Go into this one without preconceptions or expectations, and just settle in and read. Admittedly, this isn't the book for everyone, but it turned out to be the one for me.
❃❃ARC provided by NetGalley and Berkley Publishing Group