✱✱Audio Book Review✱✱ Wrong Side of the Grave by Bryna Butler 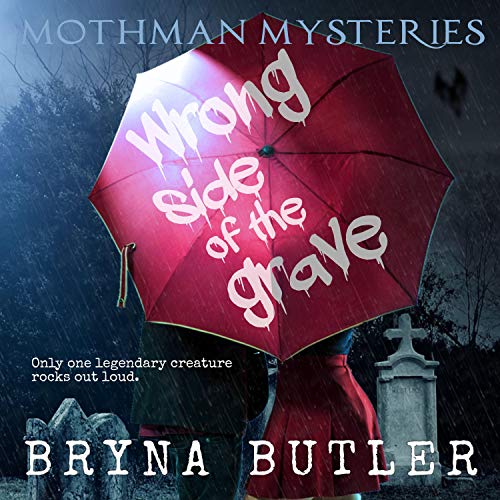 When Eric Jansen takes a seat behind his drums, every girl in the place takes notice - not that he's surprised. He's had decades to practice. Still, there's that other thing....

He's an alien. Offworlder. Take me to your leader, fall from the sky, space-invading, phoning home, UFO jockey. A swipe of the tattoo on his arm will reveal his true form, which locals call Mothman, a winged creature formed of ashen gray skin and glowing red eyes. Eric is one of the last of his dwindling, offworld species.

So when the recently deceased of Point Pleasant, West Virginia, start walking and talking, the Men in Black mark Eric as suspect number one. It'll be up to Eric and his inner circle to solve the mystery before the black suits lock him up and throw away the key.

A fun listen, Wrong Side of the Grave is a fast-action teen sci-fi mystery with a paranormal twist.

Momma Says: 5 stars⭐⭐⭐⭐
Growing up just down the road from Point Pleasant, West Virginia, it’s impossible to not have heard about the Mothman. In fact, there are probably as many stories and theories about Mothman as there are about Bigfoot or the Jersey devil. Stories, movies, TV shows – all with various ideas about this creature’s origins. So, yes, I’ve seen and read my fair share of tales about the mysterious Mothman, but I have to say that Bryna Butler’s Wrong Side of the Grave is the most fun and entertaining that I’ve come across.
The story is fast-paced and engaging from the beginning, and it doesn’t let up. Plus, it’s totally clean. We get aliens, the dead rising from the grave, vampires, men in black, and a pretty crazy villain, and I didn’t hear one single thing that I found objectionable in any way whatsoever. Aliens and the dead rising are completely outside my wheelhouse, and I usually shy away from both, but I found myself thoroughly enjoying this one. The story reminded me a bit of the teen detective books I read when I was growing up and even made me a little nostalgic for those stories and that simpler time.
James Fouhey is the narrator for this entertaining listen, and he does a terrific job as Eric, the Mothman’s cover. He somehow manages to sound like a teenage boy while also being a creature who has been here for ages, and he does it while sounding like he’s telling us his story, not just reading us a book. In my head, that is Eric’s voice, he does it that well.
To sum it up, Butler’s story and Fouhey’s narration work wonderfully together. So well that it made for a nice little bit of escapism from this chaotic world we live in. As an added bonus, I managed to get my thirteen-year-old to listen, and he loved the story as much as I did. That’s a feat in itself, and it became an even bigger deal when he asked me get the next book in the series – not something that happens very often. Wrong Side of the Grave is a story for any age. It is a mystery, but it’s also a story of friendship, loyalty, and protecting those we care about. It’s a great listen, and I can’t recommend it enough.
❃❃Audiobook provided by Audiobookworm Promotions and the author