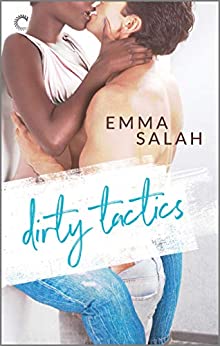 A trial period, in which hockey superstar Zac Quinn will prove to Reagan Thomas—his best friend’s younger sister and the one woman he can’t seem to keep his hands off of—that they can’t possibly date for real.

After all, the Thomas family is the only family he’s ever had. He can’t risk losing them, no matter how much he wants Reagan. She’s too important to him; he can’t let things get weird.

But Reagan has known they’re meant to be since forever. She’s not about to back down now.

If she has to play dirty to bring him around?

Momma Says: 3 stars⭐⭐⭐
Dirty Tactics is Salah’s first book in The Dirty Thomas Siblings series. Let me start off by saying this is not just a best friend’s little sister romance. It’s also an interracial, friends to lovers, and sports romance. I enjoy these genres, I really do, but there needs to be something to set it apart from the crowd, something that makes this one stand out and be remembered. You know, when someone asks for a recommendation in a particular genre, there are those that automatically come to mind and those that don't. Don't get me wrong, this isn't a bad story by any means. It did hold my interest and I liked the characters - it just didn't have that special something to make me think about it down the road. Then we have the steamy fun. The story is steamy, which is certainly not a problem, but there were elements that weren't consistent, or at least they didn't feel that way to me. As I understand it, this is Emma Salah's debut novel, and while I was left somewhere in the middle about it, the author does have talent and I'll be interested to see her growth in future books.
❃❃ARC provided by NetGalley and Carina Press