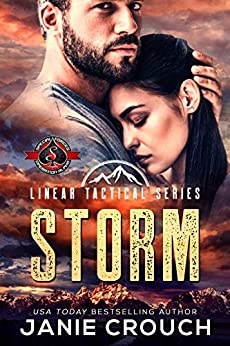 Breathe in. Breathe out. Survive.

Marilyn Ellis is finally putting her life back together. The domestic abuse she suffered may be labeled textbook by therapists, but it's the parts she's never told anyone that haunt her.

She refuses to get trapped in that hell ever again.

Former Special Forces soldier turned rancher Noah Dempsey is more than capable of training the delicate single mom in moves and tactics that will help her feel safe. But his own tortured past makes him decidedly less qualified for anything more.

No matter how much her big eyes--and even bigger heart--draw him in.

However, when unexpected danger arrives in their small town, Noah knows this is a woman worth fighting for. Worth fighting beside. And he's going to be the one to do it.

She needs a hero.
He'll have to remember how to be one.

STORM includes characters from Susan Stoker's Special Forces world and the Linear Tactical series--that perfect blend of heart-melting romance with a side of suspense! Come meet the protective alpha hero who will face any danger for the woman he loves in STORM, a full-length novel with no cliffhanger, no cheating, and a HEA guaranteed.

Romance with all the feels and edge of your seat suspense and intrigue are what I've come to expect when I sit down with a Janie Crouch novel, and Storm does not disappoint. If you've read the Tanner and Bree Thrillers then you'll recognize several of the events in this book, only we're given the details from Marilyn and Noah's perspective. That's not to say there are no surprises in this one, just maybe not as many as for those going in without already knowing the background. I know I've wanted their story since they were first introduced in the Tanner and Bree Thrillers, and knowing how some things were going to play out didn't diminish my enjoyment in the least. It certainly didn't take anything away from the love story between Noah and Marilyn. This one gets you right in the heart in more ways than one with both of these characters having their own demons to overcome. The story is sweet and sexy, and it's a story of renewal, starting over, and learning to trust. All in all, another terrific romantic suspense in the worlds of the Linear Tactical series, the Tanner and Bree Thrillers, and Susan Stoker's Special Forces.