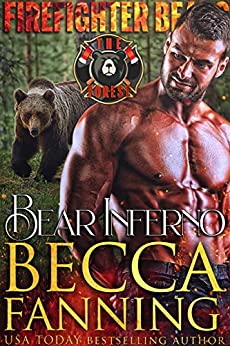 Nothing burns as bright as passion.
Years ago, before The Forest, Jim Ortega lost it all: his wife, his daughter, everything. The Forest renewed his sense of purpose, but now, with all the guys moving on with their lives, things don't feel quite right anymore.Two years ago, Julie Hall's life was changed when her fiance lost his life fighting a fire--and one of the men of the Forest chose to save her instead. Julie's been going to weekly meetings on and off since then, trying to talk things out (not that it's helping). Jim's nightmares about his wife and kids are flaring up, and he starts going back to those meetings, which helped him so much right after the accident. The two of them chat--until Julie finds out who Jim is. It was one of his teammates that left Brian to die, and she can't forgive him for that.A week later and Julie can't stop thinking about Jim. She was rude, callous, and she wants to make things up. Jim agrees, because she's been on his mind, too. But they both feel guilt over the attraction they share. Julie and Jim bare their souls to each other, and go home feeling better--and worse--after their conversation.Julie decides to get back into firefighting: it's finally time. She struggles to find someone who will hire her, a woman, until she finally finds the right station: Engine 103. And it's Engine 103 who takes a call to help some firefighters trapped in a building...firefighters that happen to be members of The Forest. And Jim is one of them...USA Today Bestselling Author Becca Fanning is excited to bring you the final Firefighter Bears fated mates novel! Things are going to get hot!

I've come to count on Becca Fanning's shifters for an entertaining bit of escapism, and I'll admit that I've grown so accustomed to enjoying her books so much that I rarely even look at a blurb, preferring to just dig right in. And that was my plan with Bear Inferno until I started it. Reading about a widow and widower finding a second chance at love was so not the getaway I needed days after being widowed. So, this one got put on the back burner. Now, I said all that to say this - months later, I picked this one back up, and to be honest, I don't think Jim and Julie's story would've had quite the same impact on me even 6 months ago. I'm nowhere near ready for moving on in a romantic way, but I can certainly relate to the characters' grief, their desire for a touch of happiness and their guilt over even a small bit of it, let alone the guilt over having feelings for someone new. That last part may be far removed from my world right now, but I get it, and as strange as it sounds, these characters helped me get on the path to healing, to some form of normalcy. Yes, this is about a group of firefighting bear shifters, and in that, it's fun and thoroughly entertaining, but the storyline couldn't have been more perfect for me. With that, I think I've given enough away about this story, so I'll just add that this is the 5th Firefighter Bears book, and I don't know if the author has more planned or not, but if the series is finished, I can't imagine a better couple for the finale.