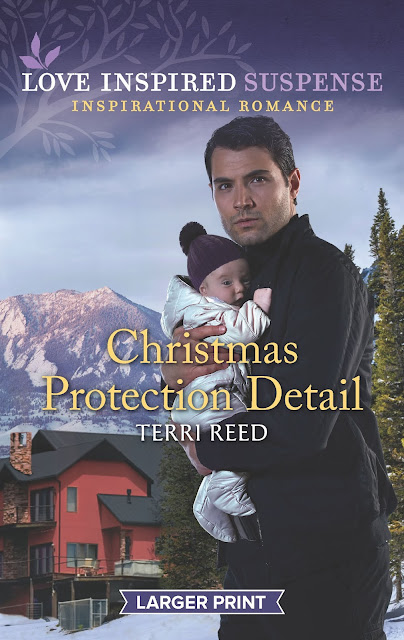 He’ll do anything to protect a baby in jeopardy…

When a call from a friend in trouble leads Nick Delaney and Deputy Kaitlyn Lanz to a car crash that killed a single mother, they become the baby’s protectors. Now figuring out why someone is after the child is the only way to save her. But they must find answers soon…or this baby’s first Christmas might just be Nick’s and Kaitlyn’s last.

Momma Says: 4 stars⭐⭐⭐⭐
As the title suggests, Christmas Protection Detail does include suspense and intrigue. That said, other than the story taking place during the Christmas season, the holiday has little to do with everything going on. Christmas themed or not, this one is a solid mystery. It has a good combination of action and tension to keep the pages turning, the characters are likable, and we get a sweet baby to ooh and aah over, which is always a surefire way to tug at the heartstrings. The book is a quick read, the story is well written and engaging, and the suspense has good buildup. All of that combined with characters you just want to root for, this one is a good way to while away a cold weekend.

Deputy Kaitlyn Lanz climbed the short stepladder to reach the last few branches needing to be decorated on the Christmas tree in the Bristle Township Community Center. The combined celebration of the season and the retirement of Bristle Township’s sheriff, James Ryder, was in full swing all around her. Christmas tunes played from the speakers mounted to the ceiling. The music competed with the many conversations taking place.

It seemed the whole town had turned out for the festivities. Kaitlyn had to admit she was pleased that so many people wanted to wish her boss—uh, former boss—well.

She sent up a quick prayer that nothing would mar the festive event. For some reason, she’d been anxious lately. Nothing specific, just a vague sense of doom that hit her at odd times. She chalked it up to losing the sheriff to fishing and traveling.

It had been several months since there’d been any real trouble in town or any need for the mounted patrol to mobilize. Not that she was complaining, because she loved being a part of the Bristle County sheriff’s department’s long tradition of patrols on horseback.

Like similar units in many Western states, the mounted patrol was comprised of both armed deputies and unarmed civilian volunteers, also referred to as auxiliary members. They provided search and rescue, as well as community and forest patrols. It was one of the various aspects of her job as keeper of the peace that utilized her many skills. She took pride in her job and always strove to do well at protecting the citizens of her town.

But tonight, she wasn’t going to let anything keep her from enjoying the party.

The deep baritone voice caused her to jerk and fumble with the ornament she was attempting to hang on the large Douglas fir tree standing in the corner of the community center. Balanced on top of the stepladder to reach a high branch, she wobbled. So much for enjoying the party. Nick Delaney, the second in line to inherit the Delaney fortune, had become the bane of her existence over the past year.

He grasped her by the waist with surprising strength, stabilizing her on the short ladder. “Steady there.”

She threw an irritated glance over her shoulder at the man. “I’ve got it.”

“Of course. But maybe hang it a little to the left,” he said, directing her placement of the glittery ornament.

Her heart thumped maddeningly. And not because she’d almost fallen from the ladder. Nick looked good tonight. As always. So maddening. Could he, just once, be unattractive?

He was dressed to impress in crisply creased black slacks and a finely tailored gray sport coat over a dark green mock turtleneck sweater. His dark hair was swept off his forehead to accentuate his chiseled cheekbones. His dark eyes sparkled, and his grin was much too confident.

From the moment she’d met the younger son of the local eccentric billionaire, Nick’s arrogance had rubbed her nerves raw.

Abruptly, she turned back to the tree, placed the ornament where she had intended and stepped down from the ladder, forcing him to release his hold and move back to give her room. “I like it where it is.”

He shrugged. “You know best, Deputy.”

She gritted her back teeth. He made the moniker sound pretentious. Turning her attention to the tree, she realized with a sinking sensation he’d been right. The turtledove glass bauble she’d brought from home needed to be a bit more to the left for symmetry.

Ah, well. She wasn’t perfect and neither were her ornament hanging abilities. But she certainly wouldn’t give Nick the satisfaction of knowing she regretted not listening to his advice. Had it been anyone else, she no doubt would have adjusted the ornament accordingly. What was it about Nick that put her on edge all the time?

She had a suspicion her irritation stemmed from the fact that he reminded her of her college boyfriend, Jason. A relationship that hadn’t ended well.

“Here.” Nick thrust a red box with a white bow at her.

Award winning, multipublished author Terri Reed discovered the wonderful world of fiction at an early age and declared she would one day write a book. Now she's fulfilling that dream by writing for Love Inspired. She is a member of both Romance Writers of America and American Christian Fiction Writers. You can visit her online at www.terrireed.com or email her at terrireed@sterling.net or leave comments on http://craftieladiesofromance.blogspot.com/ or www.loveinspiredauthors.com