✱✱Book Review✱✱ Just a Heartbeat Away by Cara Bastone

Just a Heartbeat Away 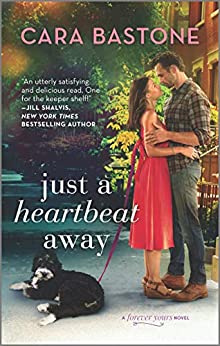 Some people change your life

Others change your heart

Newly widowed dad Sebastian Dorner was unraveling at the edges—until his son’s teacher, Via DeRosa, threw him a lifeline. Now, two years later, they reconnect at Matty’s new school, and an inconvenient but unmistakable jolt of attraction crackles between them. But why does the first person to spark with Sebastian in years have to be a millennial? Is twentysomething Via really too young for him or does fortysomething Sebastian just feel too damn old?

A former foster kid, Via’s finally forged the stable life she’s always dreamed of—new job, steady income, no drama. The last thing she needs are rumors about her and a single dad at school. But why does she keep being drawn into his capable, worn-flannel orbit? And why does being around Sebastian, Matty and even their dog, Crabby, seem to spark so much want?

They’re trying to ignore the tension threatening their friendship. But sometimes what’ll heal you is just a touch—and a heartbeat—away…

Momma Says: 3 stars⭐⭐⭐
This story took me forever to get into and ended up being just an okay read at best. Usually, I love an age gap romance and a slow burn, but this burn was so slow that it was boring at times.  The characters are likable enough, but Sebastian quickly got on my nerves with his contact questioning - “Am I good enough? Did I do that right? Is Matty okay?” and I really wanted him to talk about something other than the age difference. Via is younger than he is, but she's 28, hardly a child, and he's 42, so it's not like he's ready for the retirement home. Yes, there are differences in those age groups, but that also depends on the maturity level of each person involved. I will say that the story is a sweet, feel-good romance, and we can all use some good feels this year, it just wasn't enough to push this one into something that will stick with me for long.
❃❃ARC provided by NetGalley and Harlequin