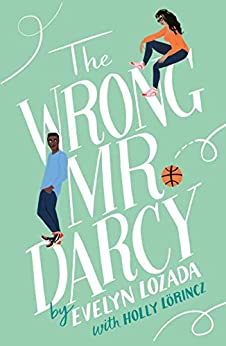 In Evelyn Lozada and Holly Lorincz's lightly inspired Pride and Prejudice romantic comedy, two unlikely people discover the error of judging by first impressions and the beauty of family, friendship and love. This book will entice you through the last page.

Hara Isari has big ambitions and they won’t be sidetracked by her mother’s insisting that she settle down soon. She dreams of leaving her small-town newspaper behind, as well as her felon father, and building a career as a sports writer, so when she is chosen to exclusively interview a basketball superstar, she jumps at the chance. It’s time to show the bigwigs what she’s truly made of.

At the same time, she meets a rookie on the rise, Derek Darcy. Darcy is incredibly handsome, obnoxiously proud, and has a major chip on his shoulder. Hara can’t think of a man more arrogant and infuriating. However, fate keeps bringing them together—from locker rooms to elegant parties, to the storm of the century—and what begins as a clash might just be more complicated than Hara anticipated. When she begins to see Darcy in a new light, Hara is not quite sure if she should drop the ball or play the love game.

Momma Says: 1 star⭐
I have a big pet peeve about calling something what it is. Specifically, book blurbs being misleading about what I'm likely to find inside. That's not to say I want spoilers because I absolutely do not, but if you call a book a romantic comedy, on the very first line of the blurb no less, I darn well expect to laugh. The Wrong Mr. Darcy falls way short on that claim. I didn't find this story even particularly amusing let alone funny. That first line also calls this book a 'lightly inspired Pride and Prejudice,' and I suppose that's loosely accurate. As far as the story goes, I ended up being disappointed all the way around. I could sit here and list things that didn't work for me, but it wasn't just one thing, it was a combination of things that didn't work, and I ended up not caring for any of it. I feel like the initial push for this one relied heavily on Lozada's fame, but since I had never seen the first episode of Basketball Wives and had never heard of her, that didn't sway me in the least. What caught my attention was the cute cover and romantic comedy claim. I realize that humor can be pretty subjective, so maybe I just don't have the right kind of sense of humor for this story. That's the beauty of opinions. I don't have to like it and you don't have to take my word for what's inside. All I can say for sure is that I most definitely did not care for, nor will I be recommending The Wrong Mr. Darcy.
❃❃ARC provided by NetGalley and St. Martin's Press