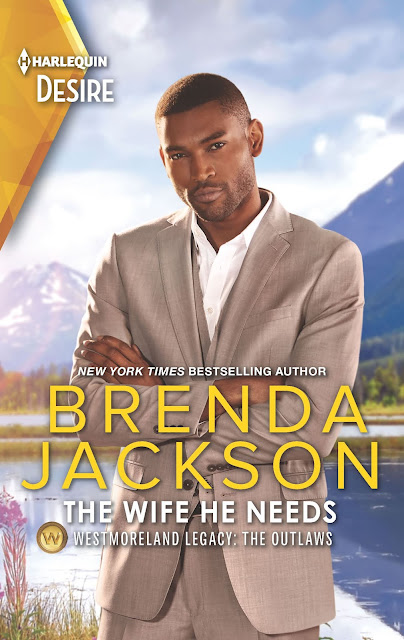 Will this billionaire bachelor say “I do” to love? He desires her more than any other woman.

The arrangement is simple: a two-week getaway, then a marriage of convenience. Until Garth Outlaw’s potential bride is a no-show. Now family pilot Regan Fairchild is sharing his bed—and he can’t get enough…even though he’s vowed never to love again. Can Regan convince him the wife he needs and the woman he desires are one and the same?

Momma Says: 3 stars⭐⭐⭐
The Wife He Needs is the start of a new series by Brenda Jackson, and if this one is any indication of what's to come, I'll be interested to see what's next. The story starts as an arranged marriage romance but doesn't quite get there, and that leaves the door open for Garth and Regan. Now, this one could've easily moved right on in to instalove, but these two already knew each other, and Brenda Jackson works it all out so that it may feel fast but isn't. It is an entertaining romance and it's a pretty quick read, so this is a good one to while away a few hours or stretch it out a bit, and it's a good weekend read.

THE WIFE HE NEEDS by Brenda Jackson Excerpt

Garth Outlaw raised his eyes from studying his cards. Was his brother playing mind games to mess with his concentration?

“And just what wedding are you talking about?”

Garth glanced around the table and saw the smirks on the faces of all four of his brothers. Even Jess had made a trip home from the nation’s capital for a week long visit.

“Is anyone going to answer?” Garth asked.

Jess grinned as he threw out a card. “I heard it from Dad the moment I walked through the door. He claims you’ve gotten over Karen Piccard, decided to settle down and do whatever needs to be done for the benefit of the company, which includes getting a wife and making babies to guarantee the Outlaw dynasty. Those were his words, not mine.”

“We heard the same thing,” Cash said, with Sloan and Maverick nodding in agreement.

Garth didn’t say anything. Being the oldest son of Bartram “Bart” Outlaw wasn’t easy, especially when his father liked spreading information that wasn’t true. However, in this case, it was. At least partly. He was planning to do what needed to be done for the company. But he seriously doubted he would ever get over Karen. She would always have his heart.

“No wedding date has been set because I haven’t chosen a bride.”

His brother Cash sat up straight in his chair. “Are you really thinking about settling down with a wife and making babies?” he asked, as if the thought of doing such a thing was as unheard of as living in outer space.

Garth threw out some chips. “Why not? I don’t see any of you guys rushing to the altar to continue the Outlaw legacy. Not even you, Jess, and you’re the politician in the family. You of all people should be thinking about acquiring a wife.” A couple of years ago, Jess had gotten elected as a senator from Alaska.

A grin touched Jess’s lips. “No, thank you. I’m not ready to fall in love.”

Garth shrugged. “Who said anything about falling in love?”

“You’re thinking of marrying a woman you don’t love?” This question came from Sloan.

“For me there’s no other way.”

There was no reason to explain what he meant. They knew.

“And you’ll do it because Bart says it needs to be done?”

Garth rolled his eyes at his youngest brother, Maverick, who’d been quiet up to now. “No, I’ll consider doing it because I think it’s about time I settled down. I’m thirty-eight, and dating gets old.”

“Speak for yourself,” Maverick said, grinning. “I happen to enjoy dating a lot of women.”

Garth shook his head. “And Walker got me thinking. Look how long he was a loner before he got married. If he can do it, then anyone can.”

Walker Rafferty was Garth’s best friend. A couple of years ago, Walker had met his current wife and now they were parents to twins, a boy and a girl they’d named Walker and Westlyn. Nobody thought Walker would ever remarry after losing his first wife and son in a car accident. Surprisingly, ten years later, Walker had fallen in love again. Garth was happy for Walker, and inspired to settle down, but honestly, he couldn’t see himself falling in love. He was convinced Karen was the only woman he was meant to love.

Brenda Jackson is a New York Times bestselling author of more than one hundred romance titles. Brenda lives in Jacksonville, Florida, and divides her time between family, writing and traveling. Email Brenda at authorbrendajackson@gmail.com or visit her on her website at brendajackson.net.