✱✱Book Review✱✱ For the Best by Vanessa Lillie 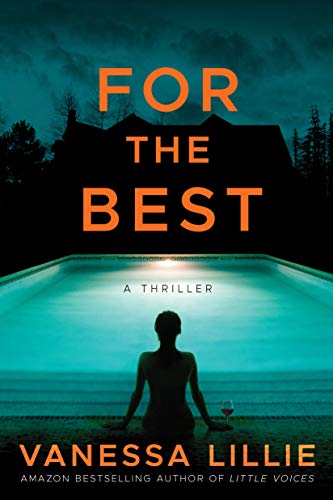 Suspected of a murder she can’t remember, a troubled woman takes an unusual approach to proving her innocence in this gripping thriller from the bestselling author of Little Voices.

When Jules Worthington-Smith’s wallet is found next to a dead man, she becomes the prime suspect in his murder. After struggling for years to build the perfect family and career, she’s dangerously close to losing everything.

Sure of her innocence, Jules is desperate to clear her name. But there’s one big problem: she was blackout drunk when the murder took place and can’t remember what happened.

Unsatisfied with the police’s handling of the case, Jules embarks on her own gin-fueled murder investigation. As she uncovers fresh clues, she starts a true-crime vlog that becomes a viral sensation, pushing her into the public eye. It’s not long before the ordeal forces Jules to confront her demons, including her turbulent childhood and excessive drinking.

The deeper Jules digs, the more dirt she uncovers about the murder and herself. Unexpected truths pile up until she’s buried so deep even finding the killer might not be enough to set her free.

Momma Says: 3 stars⭐⭐⭐
For the Best has an intriguing premise, and it certainly showed promise - it just never quite got there for me. The story moves a bit slow for my tastes, but I think a big part of that was due to my opinion of Jules. I just could not make myself like her. She has her share of problems, including drinking until she's blackout drunk, and in a lot of cases, a flawed character can make things more interesting. Not so with Jules. She's entitled and her 'it's all about me' attitude grated on my nerves, making the book feel even longer than it was. I get that feeling like she's been wrongly accused would bring some of that on, but this woman didn't seem to have a single redeeming quality. That said, the ending did pull the story out of the hole it was in and pretty much saved this one for me. To sum it up, I'd have to say that For the Best had a strong conclusion, but the getting there felt much too long with a character I couldn't stand.
❃❃ARC provided by NetGalley and Thomas & Mercer