Bride on the Run Tour and Giveaway 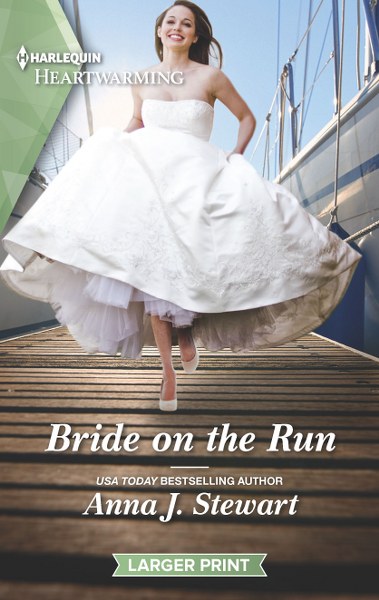 Finding true love…
In the unlikeliest places!
Sienna Fairchild never imagined she’d be a runaway bride. Or that she’d stow away on a worn-down boat belonging to handsome tour operator Monty Bettencourt. Monty’s used to navigating rough seas, but Sienna might overturn his whole life, and avoiding drama is tough in such close quarters! If Sienna’s sure she doesn’t know what she wants, then why does running away feel so much like coming home?
Add to Goodreads
Amazon * Apple * B&N * Harlequin * Kobo

“Something wrong?” Vincent stepped onto the boat and Monty spun around.

“No. I have this inner ear condition.” He pretended to sway. “I move too fast and I get all... Be right back.” He hurried down the ladder just as the closet door closed, arm and shoe out of sight.

His mind raced as he feigned searching for his stowaway. He opened doors, slammed them shut, all the while asking himself what he was going to do about the woman in his closet. Clearly she didn’t want to go with Vincent and Richard. She knew they were here yet remained hidden. Having met the guys, Monty could understand her reticence. He could at least play along with her for a while. Maybe long enough for her to make a real getaway.

He rapped his knuckles on the closet door as he passed and thought he heard a yelp, then he returned up the stairs.

“They did.” Richard bolted forward again, but Vincent stopped him with a hand on his chest.

“She’s not here, Richard,” Monty said, erasing all humor from his voice. “Unless you plan on calling me a liar and having the police conduct a legal search, I suggest you get off my property.”

“It’s fine. It’s fine,” Vincent repeated when Richard started to argue. “She can’t have gotten out of the club without someone seeing her. She’s here somewhere. We’ll just have to look elsewhere.” He faced Monty. “Thank you for checking. If you do see her—”

“I’ll send up a flare.” Monty shoved his hands in his back pockets and smirked at Richard. Depriving him of even a bit of triumph felt like an accomplishment.

Monty waited calmly, watching as the men retreated and disappeared into the yacht club. Only when he was sure no one was watching did he let out the breath he’d been holding and head to the cabin below.

This time he didn’t spare a knock, but yanked open the closet door, only to stare into the most stunning brown eyes he’d ever seen in his life. She stared back at him, unblinking, defiance shining as she struggled to keep hold of her monstrous dress and one sparkly shoe.

“Sienna Fairchild, I assume? Monty Bettencourt.” He bowed slightly and held out his hand. “Welcome aboard.”

USA Today and national bestselling author Anna J Stewart writes sweet to sexy romances for Harlequin and ARC Manor’s Caezik Romance. Her sweet Heartwarming books include the Butterfly Harbor series as well as the ongoing Blackwell saga. She also writes the Honor Bound series for Harlequin Romantic Suspense and contributes to the bestselling Coltons. A former Golden Heart, Daphne, and National Reader’s Choice finalist, Anna loves writing big community stories where family found is always the theme. Since her first published novella with Harlequin in 2014, Anna has released more than forty novels and novellas and hopes to branch out even more thanks to Caezik Romance. Anna lives in Northern California where (at the best times) she loves going to the movies, attending fan conventions, and heading to Disneyland, her favorite place on earth. When she’s not writing, she is usually binge-watching her newest TV addiction, re-watching her all-time favorite show, Supernatural, and wrangling two monstrous cats named Rosie and Sherlock.  You can read more about Anna at her website, www.AuthorAnnaStewart.com.
Website * Facebook * Twitter * Instagram * Bookbub * Amazon * Goodreads