The Trouble With Picket Fences 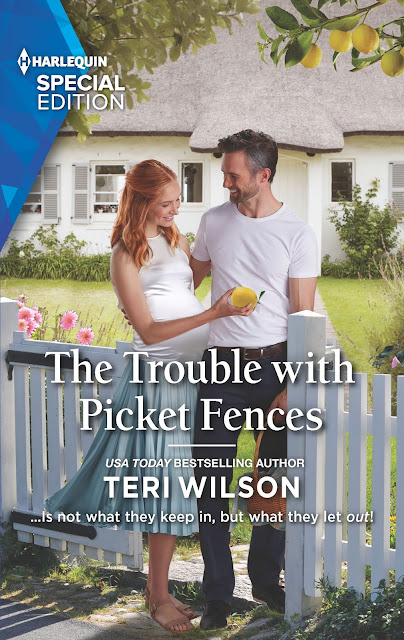 She could teach him to turn lemons into lemonade.

All her life, Melanie Carlisle knew how to succeed in the face of failure. So when she finds herself pregnant—and her ex-boyfriend bows out, claiming he's not the "picket fence type"—Melanie is on her own. Now she has a house—with a picket fence she wants gone. Cap McBride is dealing with his own problems, what with a potentially career-ending hearing loss and his surly teenager. So the last thing he wants to do is get involved with a single pregnant woman. As for fences? The only thing he knows how to do is put them up!

Will this fence make good neighbors into something more in the latest installment of award-winning author Teri Wilson's Lovestruck, Vermont series?

Momma Says: 4 stars⭐⭐⭐⭐
Maybe it's just the crazy stressful time we're in, but I've really come to enjoy a sweet, not too complicated romance. The Trouble with Picket Fences fits that perfectly. Of course, Cap and Melanie have some of those earlier mentioned complications, but it's more misunderstandings or miscommunication that comes between this couple and their HEA. I liked the characters and I really liked that Melanie and Cap aren't twenty-something new adults. Instead, their both closer to my own age. I don't find too many romances in my own age group these days, so this was a refreshing change.
This is the third book in a series, but it does work as a standalone - at least it did for me. This is my first in the Lovestruck, Vermont series, and Teri Wilson gave me everything I needed. I am now curious to check out the first two books, but that's because I enjoyed this one so much and I liked the characters. So, if you enjoy sweet, small town romance, I'd recommend this one.
🞿🞿🞿🞿🞿

Melanie stood at her kitchen counter, stirring a pitcher of fresh-squeezed lemonade with her favorite wooden spoon while she gazed out the window and watched the man she’d met at the hardware store systematically disassemble her white picket fence. She didn’t normally coerce strange men into doing her favors like this. Melanie was more of a do-it-herself kind of girl. But desperate times called for desperate measures and all that. As much as she didn’t want to think of herself as geriatric—ugh, why couldn’t she forget about that mortifying word? — she was well aware that any pregnancy after forty was considered high-risk. She couldn’t go around wielding sledgehammers anymore.

Not that she’d had much occasion to do so in the past, but still.

The muscles in Cap’s broad shoulders flexed beneath his LFD T-shirt as he added another white board to the pile of discarded lumber in her front yard. Melanie wondered if he was a firefighter. Probably so, given his attire and also given his proficiency at manual labor. He was making quick work of the fence. She could definitely picture him chopping away at a smoldering pile of rubble with an ax or carrying a baby away from a burning building.

Melanie blinked. Hard. She didn’t want this man darting around her imagination, no matter how heroic he seemed. And she was really getting tired of the annoying habit she’d developed of trying to picture every man she met interacting with a child. She blamed it on Greg. Once a man told you that he had absolutely zero interest in having children—ever—it was hard not to wonder if other men felt the same. How had she failed to realize that in the eleven years she and Greg had dated, she’d never seen him hold a baby? Not once. It seemed statistically impossible, but alas, it was true. In the wake of their breakup, Melanie had done a thorough inventory of both her memories and her photo al- bums. Across the board, Greg’s arms remained notably baby-free.

Now, whenever she set eyes on a man, Melanie couldn’t help but wonder about his infant- holding history. She refused to get caught off guard again, although she wasn’t sure why. It wasn’t as if she were looking for a husband. Or even a boyfriend—been there, done that, got the T-shirt. She had a new baby to think about. A new business. A new home. Her plate was beyond full as it was.

Even so, she would have bet money on the fact that Cap had held his fair share of babies. Probably his share plus Greg’s neglected share combined, a fact that didn’t sway Melanie in the slightest. She liked to think of her baby-holding scale as an odd science experiment of sorts, not a measure of attractiveness. But the man had agreed to do her a massive favor without knowing anything about her other than her name, so the least she could do was whip him up a pitcher of lemonade.

It was her specialty, after all. And being America’s unofficial lemonade queen, she’d carefully labeled her kitchen boxes to ensure that her juicer, wooden spoon and glass pitcher were readily accessible.

USA Today Bestselling Author Teri Wilson writes heartwarming romance with a touch of whimsy. Three of Teri's books have been adapted into Hallmark Channel Original Movies, including UNLEASHING MR. DARCY (plus its sequel MARRYING MR. DARCY), THE ART OF US and NORTHERN LIGHTS OF CHRISTMAS, based on her book SLEIGH BELL SWEETHEARTS. She is also a recipient of the prestigious RITA Award for excellence in romantic fiction for her novel THE BACHELOR'S BABY SURPRISE.