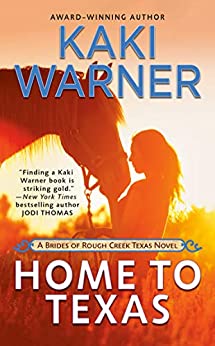 She’s his last case, he’s her fresh start—two troubled ex-soldiers find new purpose and a second chance at love in this new contemporary western romance from award-winning author Kaki Warner.Lieutenant KD Whitcomb had mapped out her career from West Point to the Pentagon. But when an injury under questionable circumstances forces her to leave the army, her dreams fall dead at her feet. Feeling lost and needing to rediscover the tough woman beneath the uniform, she heads back to the family ranch in Rough Creek. Only two things get her through the nightmares and sleepless nights: the support of her family and the CID officer investigating the incident in Afghanistan. He infuriates her. Makes her laugh. Gives her hope. Richard Murdock is struggling, too. There’s something fishy about this last case…and the threats coming from Afghanistan aimed at both him and KD. He’s ready to leave the army and make a new start. But how will he protect KD? And what should he do about the growing attraction between them? He’s been burned before. But there's something about KD's vulnerability and strength that calls to him, and he'll do whatever it takes to protect her and give her a chance to build new dreams…including helping her start a PTSD equine therapy program at the Texas ranch. If they can overcome the threats against them and heal old wounds, this second chance might be better than they ever dreamed.

Home to Texas is a good mix of romance and suspense, and I was pleasantly surprised to find both elements receiving equal time. The story has a steadily rising tension where the investigation is concerned along with a fair bit of danger. The romance between Richard and KD brings the feels and these characters are so likable that you can't help but want them to work out. The only drawback for me is that some parts of the story felt a little more drawn out than completely necessary, but that wasn't enough to deter me and I still thoroughly enjoyed the story. This is my first read by Kaki Warner, so I haven't read the first book in this series, but I didn't see any reason that this book wouldn't be fine as a standalone. That said, Warner has some great characters in this story - even the secondary characters draw you in - so I'll be looking into the first book in the series as well as watching to see what's next. The writing is quite good, the story held my interest, and I really like how we get a satisfying conclusion to both elements, romance and suspense.

Kaki Warner is a RITA-winning author and longtime resident of the Pacific Northwest. Although she now lives in the eastern slopes of the Cascade Mountains in Washington, Kaki grew up in the Southwest and is a proud graduate of the University of Texas. She spends her time gardening, reading, writing, and making lists of stuff for her husband to do, all while soaking in the view from the deck of her hilltop cabin.