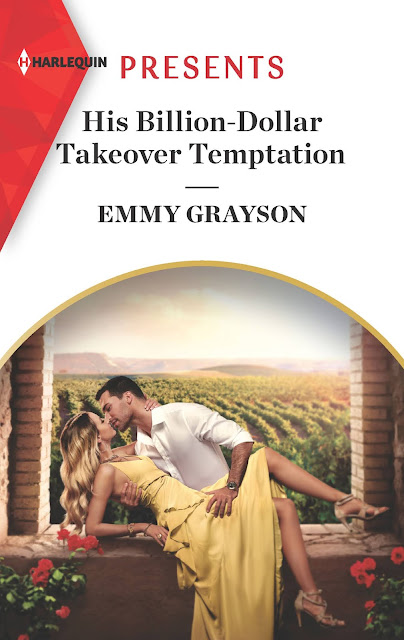 In debut author Emmy Grayson’s sexy workplace romance, will the Spanish CEO be able to resist giving in to desire?

He will claim her company

But can he claim her, too?

Everleigh Bradford won’t simply hand over control of the family vineyard she expected to inherit. She’s lost too much already. If she must confront internationally renowned new owner Adrian Cabrera, she will! Even if she has to fight her red-hot response to the brooding Spaniard.

Bringing Everleigh home to Grenada to prove he’ll protect her heritage is essential to their working relationship—but it’s dangerous. Innocent Everleigh is intoxicating. And she deserves everything that Adrian’s past and his iron self-control won’t let him give her. No matter how tempting it is…

Add His Billion-Dollar Takeover Temptation to your Goodreads!

Momma Says: 3 stars⭐⭐⭐
When thunderstorms knock out the power, you can sit in the dark and stare at your phone or you can light a candle or two, pour a glass of wine, and curl up with a romance for some swoony escapism. His Billion-Dollar Takeover Temptation is a good choice for that. I love the setting and the premise. Adrian was a little hard to like at first, but I think part of that was because of the contrast with Everleigh's innocence He did grow on me, and the further into the story I got, the more I wanted this couple to get their HEA. They do have some issues to work through, and it's not hard to see where the angst and where that pivotal moment will come from, but all in all, this one was an entertaining romance that was a good choice to while away a rainy evening.
🞿🞿🞿🞿🞿

A skintight orange gown enhanced Jackie’s slender figure, including the generous amount of cleavage that threatened to burst free at any second. Dark curls fell in an artfully arranged waterfall over her shoulder, accentuating sharp cheekbones and a large, blindingly white smile any model would envy.

But, other than the vaguest stirring of a physical response to her amply displayed breasts, he felt nothing. After years of entertaining himself with models, politicians, business leaders and actresses, he was very selective in his choice of bedmate. Married women and overly attentive ladies who wore their greed on their sleeves topped his off-limits list.

“I’d love to know more about your winery.” She smiled again and pressed her breasts flush against him.

The move jostled his arm. Ruby-red wine sloshed out of his glass onto the white cuff of his dress shirt. His mild irritation flared into icy displeasure.

She scuttled down the length of the balcony and hurried down the stairs. He watched as she reached the ballroom floor and disappeared into a sea of evening gowns and tuxedos.

A glance down at his shirt made him sigh. He had plenty of dress shirts in his closet upstairs in the Roosevelt Penthouse Suite. It would only take ten minutes to change and rejoin the party. But the deviation to his routine annoyed him. He always spent the first half-hour of a wine release alone, surveying whatever grand room his event planner had booked and savoring the success that had brought him to this moment.

From evaluating the mineral levels in the soils of the vineyards to collaborating with his head of marketing on the international campaigns that had taken Cabrera Wine to the top of the industry, each wine release marked the end of a long, demanding journey.

As a Cabrera, he could have asked for much more by way of reward. All he wanted was thirty minutes to himself.

She’s gone. Focus on the party. Don’t let her ruin your night.

Tiffany chandeliers cast a sparkle over the golden ceiling as partygoers milled about the ballroom. Waiters expertly danced in and out of the guests with silver trays full of culinary treats like brie-stuffed mini burgers and pork chop bites with a tangy orange barbeque sauce.

Adrian’s blood had curdled when Cabrera Wine’s event planner, Calandra Smythe, had read the menu to him. Did Americans have to put barbeque sauce on everything?

Yesterday’s final tasting had altered his view somewhat, when he’d been forced to admit that the unique recipes brought out the velvety flavors of the Merlot. And the surprisingly tasty offerings had been a hit with both his American and international clients.

Down below, he watched Calandra flit through the crowd, her eagle eyes seeking out every tiny imperfection with laser precision. From relighting candles to adjusting the angle of the tall vases overflowing with Spanish bluebells and white carnations, she had everything under control. As always.

He’d started to turn back to the arched window, to pull the curtain aside and take just a moment longer to enjoy the sight of the skyline, when he caught sight of a woman gliding in and out of the hordes of people. Her confident, graceful movements, coupled with the tumble of blonde hair cascading over her shoulders, piqued his interest. Elegant, yes, but something about her seemed out of place compared to the stiff-necked men and women milling about.

The crowd broke for a moment. He could see her below him, illuminated by the golden light of the chandeliers and the glow of the hundreds of candles that lit the ballroom. Her head snapped up and their gazes collided, caught and held.

When Emmy read the best series of her childhood, Nancy Drew, she cheered for her favorite titian-haired detective to solve the mysteries that plagued River Heights while reading the books featuring Nancy's boyfriend Ned Nickerson over and over again. Fast forward a few years later to when Emmy found a copy of A Rose in Winter by Kathleen Woodiwiss, and she was hooked on romance. Thirteen years after she submitted her first novel, and received her first rejection, from Harlequin, Emmy got the call from editors Flo and Charlotte with Harlequin Presents.

When she's not writing, she's working her day job in public relations. At home, she wrangles her adventurous toddler, explores the countryside with her fur babies or enjoys a glass of wine on the front porch of her Midwestern home with her firefighter hubby.

Emmy loves romance (of course). Nora Roberts, Julia Quinn, Sabrina Jeffries, Tessa Dare, Amanda Quick and Mary Jo Putney are just some of her favorites. She's also a die-hard mystery fan. Her two favorite authors are Agatha Christie and Ellery Queen, writers her father introduced her to and that she rereads at least once a year.