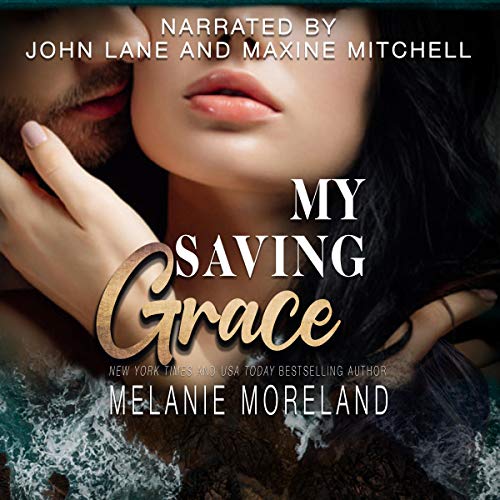 In the first book of the ABC Corp series, and the next generation of Vested Interest, Grace VanRyan has her life mapped out: law school, a career with ABC, and a bright future ahead of her. Until Jaxson Richards steps into the picture. He’s everything she hadn't planned for. Older, sexy, off-limits. And her new boss. When the passion between them explodes, will her life blow up along with it?

Momma Says: 5 stars⭐⭐⭐⭐⭐
I'm pretty new to Melanie Moreland, and boy oh boy, am I ever wondering what took me so long. My Saving Grace is the first in a spin-off series, and after meeting so many of these characters, I think I need to get their stories. This book is packed full of terrific characters, and that's not even counting our romantic couple who kept me glued to the pages. Jaxson and Grace pull out all the feels, and when I say all, I mean just that. I'll be honest, there were times when I really wasn't sure if I was gonna like this romance or not. Oh, I loved the banter, and as I mentioned, there were some terrific characters. And I liked Grace. She's a strong woman, capable of taking care of herself, but that doesn't define her. She's also loving and forgiving - the latter might take some coaxing, but it's there. Then there's Jaxson, and there were moments when I really wanted to punch him right in the mouth. At the risk of giving something small away, I was kind of cheering when someone else does just that. My feelings about Jaxson were all over the place. He'd say or do something so sweet then turn around and say or do something else that drove me crazy. I'm sure that was the idea, and it worked wonderfully. Yes, Jaxson was a big ol' jerk at times, and during some of those times, I really wanted Grace to walk away. But he was also one of my favorite types of character. He's arrogant while still being unsure about what he's feeling, and he's so wonderfully redeemable. So, My Saving Grace is everything a good romance should be - it's emotional, it's sexy, and it's witty. The characters feel so real they practically leap off the page, and the story is totally engaging and entertaining.
I read the book when it released, and I wrote all of that about it. Then I listened to the wonderful narration by Maxine Mitchell and John Lane, and if I could give it more stars, I would. So, those characters that already felt so real now have a voice in my head. That witty banter was done perfectly, and the emotions between Jaxson and Grace came through loud and clear. Even knowing everything that was going to happen, I still hung on every word and felt all the same things. I loved this couple when I read them, and I'll be honest, I wasn't sure at first about listening to them, but these narrators were spot on with this story and even the secondary characters were done just right.
My Saving Grace is one of those books I can come back to and revisit the characters time and time again, and whether I read it or listen to it, it's an excellent story.