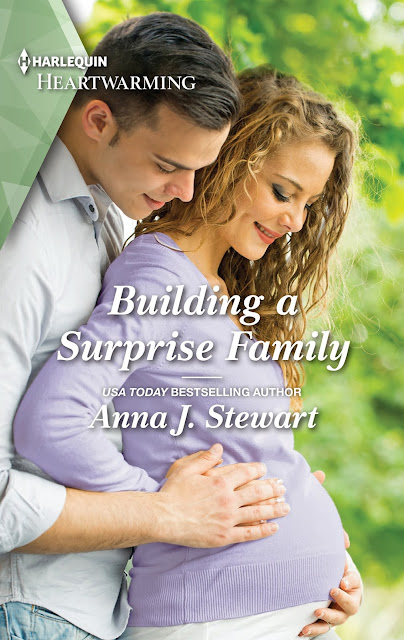 Pregnant construction supervisor Jo Bertoletti doesn’t need anyone’s help…or another heartbreak. So she’s putting handsome, kindhearted firefighter Ozzy Lakeman firmly into the friend zone. After all, she’s just passing through Butterfly Harbor, and her life is too complicated for a summer romance. But Ozzy feels an immediate connection. Can he convince the woman of his dreams to take a chance on building a forever family with him?

Add Building a Surprise Family to your Goodreads!

Momma Says: 4 stars⭐⭐⭐⭐
I've heard good things about the Butterfly Harbor series, and after reading Building a Surprise Family, I completely understand the comments about wanting to live there. This is one of those places that's almost like a character in its own right. Then there are the many great characters in the book. Jo and Ozzy were likable separately and together, and the secondary characters were equally so. We do get a bit of those characters' backstories through various conversations, which helped with getting to know the town since I'm new to the series. That said, this one does stand alone - kind of. There's some mystery surrounding the construction site and a rather obvious hook for the next in the series. That didn't diminish my enjoyment of Jo and Ozzy's story, and I've fallen for this town and its inhabitants, so in addition to checking out the earlier books in the series, I'll be on the lookout for what comes next.
🞿🞿🞿🞿🞿

The truck’s engine suddenly went silent. Ozzy walked over to greet the driver. “That is a thing of beauty,” he said as the door opened and the driver dropped to the ground in front of him.

Every thought he had disappeared straight out of his head.

Tall, curvy and with sun-streaked blond hair knotted into a messy pile on top of her head, Butterfly Harbor’s latest arrival faced Ozzy with a wide, welcoming smile on her round face. Beneath the barely-there sunlight of the May morning, her skin seemed to glisten in the chilly air. She had light brown eyes, almost amber with flecks of gold that sparkled when she smiled. She wore snug jeans that accentuated everything a man like him enjoyed, sneakers that looked as if they’d been worn into the ground and a snug short-sleeved turquoise T-shirt that displayed a surprisingly round stomach.

The new foreman was a woman?

“Didn’t realize there’d be a welcoming committee.” The woman closed the truck door and stepped up to him. “I know I wasn’t expected until next week, but I wanted to get a jump on settling in. I’m Jo Bertoletti. You are not Mayor Hamilton.” She gestured to Ozzy’s T-shirt with the BHFD logo on the front peeking out of his jacket.

“Ah, no, ma’am.” Ozzy shook her offered hand. Her skin felt rough and calloused, proving she was someone who was used to getting her hands dirty. Beneath that observation, a dull buzz shifted through his system. “I’m Ozzy Lakeman. I was in the diner when you drove down Monarch Lane. Just thought I’d come up and be the first to see what was happening here.” His own smile widened as something oddly definitive dinged. “I guess that makes me the welcoming committee.”

“I appreciate that, Ozzy Lakeman of the BHFD.” She beamed at him before her expression shifted into a knowing one. “Judging by the look on your face, I’m betting you weren’t expecting someone…like me.”

“I…uh.” There had to be a way to answer that without sounding like a complete sexist or jerk. “Like you?”

Jo snickered. “Don’t worry, Ozzy. Not the first time I’ve seen that reaction when I arrive on a site. And it’s not because of the little bun I’m baking in here. Bun in the oven. That’s such a weird phrase. Although come to think about it, I have spent my fair share of time waiting for my sourdough starter to develop.”

Ozzy could only nod. His ears were buzzing and his heart did an odd little skip and jolted in a manner he’d never felt anytime he’d swiped right.

USA Today and national bestselling author Anna J Stewart can't remember a time she didn't have a book in her hands or a story in her head. Early obsessions with Star Wars, Star Trek, and Wonder Woman set her on the path to creating sweet to sexy pulse-pounding romances for her independent heroines. Anna lives in Northern California where she deals with a serious Supernatural addiction and an overly affectionate cat named Snickers.

An Eclectic Collection of Psychedelic Poetry to Stimulate the Senses and Open the Mind Poetry Date Published: 03-21-2022 ...