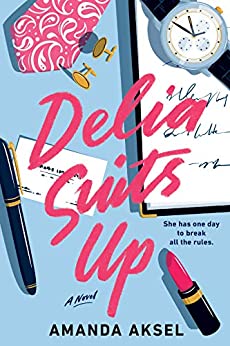 If you had one day to rewrite the rules you live by, would you? Delia Reese takes the financial world by storm in this breakout novel that's 13 Going on 30 meets She's the Man.

Just once, Delia Reese wants to be the one calling the shots—not the one waiting to be called. Despite her stellar resume, hiring managers at the big banks won’t give her a chance.

Following yet another failed interview, Delia commiserates with her roommates and drunkenly finds herself wishing she had the advantages that come with being a man. If society wasn't locked into gender roles, she'd be climbing the corporate ladder in designer heels with no apologies. By morning, her mirror reflects a surprising makeover.

Now that the world sees her as a man, Delia’s determined to double down on society’s double standards. With a smart suit and powerfully pink necktie, she hits New York's financial district with a big gamble in mind.

Early Praise for DELIA SUITS UP

“In Delia Suits Up, her 'Wall Street' meets 'Freaky Friday' experience forces Delia to rethink everything that she values in life, and puts a whole new spin on girl power.”

—kc dyer, author of Eighty Days to Elsewhere
“A delightfully fun yet thought-provoking page-turner. Ms. Aksel delivers a smart, sexy tale of a woman determined to smash the glass ceiling who discovers that sometimes the most courageous thing you can be is yourself.”
—Melanie Summers, bestselling author of The Royal Treatment
“Delia Suits Up is a hilarious, laugh-out-loud, thoroughly entertaining story from the first page to the last.”
—Helena Hunting, New York Times bestselling author
“See life through a different lens in this thought-provoking, creatively told skewering of societal norms—perfect for fans of Freaky Friday and She’s the Man.”

Momma Says: 4 stars⭐⭐⭐⭐
If you like those switch places with someone, walk in someone else's shoes kind of movies, then Delia Suits Up is a good choice for a get away from it all bit of fun. The story does require some suspension of disbelief, but I expected that given the premise. So, yeah, it's not at all believable, but it is loads of fun. Amanda Aksel has addressed a serious topic, but she's still managed to keep the story light. Some of the humor is a little on the crude side, but it still adds a note of humor. This is a great choice for a bit of escapism - a cup of coffee or glass of wine, your favorite chair, and Delia Suits Up to get lost in. It made for a nice little weekend read for me. It's a well-written, entertaining, and funny tale with likable characters and a pace that keeps the pages turning.

Stay positive. That’s everyone’s advice, as if enduring opti­mism is some kind of elixir. Lately, positive doesn’t cut it.

The antique clock’s ticking pulse fills the room. It’s been thirty- two seconds since he’s said a word. I watch his reflection on the sleek mahogany desk scan my resume up and down. Up and down. What’s he looking for? Waldo? We’ve already established I’m well qualified for this position. I cross my fingers, keeping them hidden beneath my padfolio.

This guy’s view of the city stretches all the way to the East River. The window alone is half the square footage of the apart­ment I share with two roommates. He shifts again in his plush leather chair, grazing his bristly mustache with his fingertips. Twelve seconds later, he peers over the rim of his glasses and draws in a slow breath while I hold mine. Monty Fuhrmann is one of the top investment banking firms in the world. Landing a position here would mean being a part of larger- than- life deals with a pay­check to match. It’s more than a job. It’s a dream come true.

“It’s Miss, or you can call me Delia. It’s very important that you know I’m a Miss. I’m not married. No children. I don’t even have a boyfriend. Who needs the distraction? Am I right?” I say as if handing him a good- ole- boys brandy.

I clear my throat, resenting the fact that as a woman in this industry it’s better for me to admit that I have no life. And no prospect of having one either. He’s probably wanted to ask me ever since my resume came across his desk. But legally . . . he can’t.

Maybe if I tell him that I’ve spent the last three nights in bed with a pint of Häagen- Dazs, he’ll hire me on the spot.

“What I mean to say is that work is my life, and I will make this job and this firm my life if you hire me.” My fist falls softly on my padfolio. I wish I had the balls to bang it on his shiny desk.

Of course that’s all I get.

It’s typical in this industry for men to dismiss women. To them, we’re temporary fixtures around the office, bound to meet and marry Prince Charming, experience the miracle of childbirth after a miserable nine months of sobriety, then ultimately crumble under the pressure of balancing mommyhood with an intense ca­reer. We’re gone as quickly as we arrived; off to spend our morn­ings watching cartoons with small people, cleaning messy faces, and running bake sales with the other career abandoners. But that’s not me. I have as much potential as the applicants wearing neckties. And I’m dedicated. The most dedicated, in fact, and yet, I have to sit here beaming pleasantly and plead my case.

Mr. Mustache returns a smile. “Your resume’s very impressive. Any firm would be happy to have you on.”

“It was nice to meet you, Miss Reese. We’ll let you know.”

Right. Translation— we’re not interested. I catch myself frown­ing and immediately force a smile. Staying positive is like a full- time job in itself. I was optimistic after I was laid off, hopeful when I went on my first five interviews. But I’m not sure how much longer my bank account will stay positive.

He rises and extends a hand. I jump to my feet so I can meet his eye line, or meet it as best as I can. These heels give me an extra three inches.

I muster my solid I’m as good as any man handshake like it makes a difference. “I’ll look forward to your call.”

Walking back through the polished waiting area, I see noth­ing but suits and ties. The only other woman is the receptionist behind the front desk. I swipe my lips with a fresh coat of Fierce Crimson on the elevator ride down to the thirty- second floor. That’s where I’ll find Eric. He’s my friend and colleague from the Howard Brothers Group. We were laid off along with a bunch of others after the merger. That was four months ago. Eric’s been employed here for three. Rows of desks set up with bright LED monitors and ergonomic keyboards fill the floor. Young underwriters talk into their headsets while typing away into so­phisticated software programs. I catch tiny fragments of their conversations— capital, prospectus, issue price, shareholder, syndicate— dialogue that always energizes me. That’s how this industry is. Never a dull day. For a moment, I forget I’m not one of them anymore and hold my head high. This is my playground.

When I was little, Giggles candies were my favorite— specially the watermelon flavor. Every paper wrapper had a silly saying written on the inside, almost like a funny fortune cookie. My fa­vorite one said, “A bank is a place that will lend you money, if you can prove that you don’t need it.” Out of all my fourth- grade friends, I was the only one who got the joke, which made me feel special. Granted, my dad is a financier with his own firm.

He took me to the Giggles candy factory once for a private tour. I sampled so many sweets that day that I couldn’t stomach dinner. Dad explained that it was his company that helped Giggles grow so big that lots of kids like me could enjoy those funny treats. His eyes radiated pride as we walked the factory lines that day. That’s when I decided that I wanted to help companies grow too. And I wanted to be the best at it because if I were the best, maybe he’d look at me with the same pride. That’s why I came to Wall Street, to play with the big boys, which now that I think about it doesn’t leave much room for big girls like me. And my current circum­stances are proof of that.

Eric peeks around his own monitor, catching me with his al­luring eyes. My breath gets stuck in my throat. I don’t usually go for the whole blue- eyed- blond thing, but he makes my tempera­ture rise like a bull market.

“Hey, Delia!” There’s something thrilling about the way he says my name. I could listen to him say Delia all day long and never get sick of it. “Did you kill it? You’re starting Monday, right?”

Sure. A little piece of me dies every time I have to fake it twice as much as any guy interviewing for the same position.

Amanda Aksel is a West Coast transplant whose curiosity about people led her to earn a bachelor's in psychology. Instead of pursuing a career as a couples counselor, she wrote about one in her first novel.