Awakened by the CEO's Kiss
by Therese Beharrie 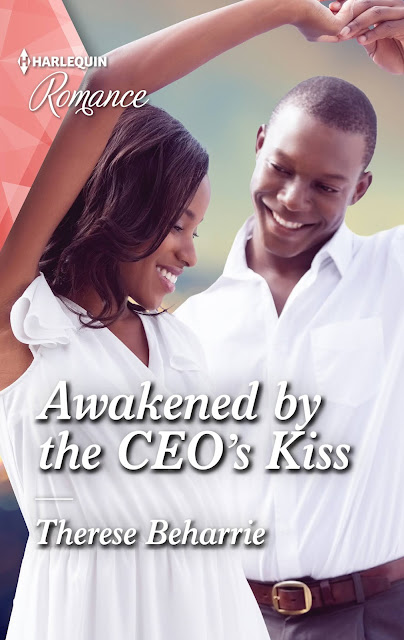 Friendship is all she can offer…

…but he makes her want so much more!

The incredibly attractive man on Brooke Jansen’s doorstep is definitely not the new housekeeper she’s expecting. CEO Tyler Murphy is filling in temporarily, yet within days he’s turned Brooke’s carefully curated life upside down! Suddenly she’s living—and feeling—again. But her connection with Tyler is dangerous, exciting and strangely familiar… After losing everything once already, can Brooke risk her damaged heart again?

Add Awakened by the CEO's Kiss to your Goodreads!

Buy Awakened by the CEO's Kiss by Therese Beharrie!

Momma Says: 4 stars⭐⭐⭐⭐
Awakened by the CEO's Kiss has an interesting premise and it kind of falls into the second chance romance trope. It's a slow-burn love story, and it's more dialogue-driven than I've seen in the genre for some time. That can go either way for me, but it works well with this storyline. Brooke and Tyler each have some things to work through, including a past that Brooke can't remember, but they have good chemistry and they're easy to root for. The book is a relatively quick read that's perfect for a weekend by the pool read.
🞿🞿🞿🞿🞿

For the second time in his life Tyler Murphy was staring at the most beautiful woman he had ever seen.

The first time had been five years ago, at a coffee shop around the corner from the hospital. He had been visiting his sister, who’d just given birth to his nephew, and he had been dealing with some…stuff. Mainly the fact that his mother, who had passed away months before that, wouldn’t get to meet her first grandchild. The woman who had prized family so much wouldn’t get to see hers expand.

He’d needed some space from the hospital. And there had been Brooke. Standing at the counter, staring at the menu with a dazed look on her face.

He thought about that day a lot. The days after, too—that week they’d spent together. The sadness that had lurked in her eyes even when she was smiling. How often she would trail off when she spoke, as if she had forgotten what she was saying. She would always beam at him after, especially if he prompted her, and he’d put it down as one of her quirks.

Those memories were all he had of her. Her first name—only her first name—and his memories. It hadn’t mattered then. He had known she was the type of person who picked up litter when she saw it on the street. Who allowed elderly people ahead of her in a queue. She hoped for a world where people were kinder, less self-centered. She didn’t like intolerance, and she had told him about the times she’d stepped in when she’d witnessed it.

He might have thought it dramatic if he hadn’t been staring at her now, waiting for her to recognise him.

‘You’re not Tia Murphy,’ she said, her voice a frustratingly adorable lilt of confusion.

‘No, I’m Tyler Murphy.’ Which you already know. But I guess if we’re playing this game… ‘I’ll be helping you out for the next—'

He didn’t get the chance to continue. Brooke let out a cry as her body bumped against the door. Seconds later, the door opened wider. He didn’t catch what flew past them, but he knew it was some kind of animal.

‘No!’ she shouted. ‘Mochi, you come back here right now!’

She ran down the three steps that led to the front lawn, before bolting towards what Tyler could now see was a dog. He didn’t think she’d expected to chase after a dog. Or maybe she had; he wasn’t proficient in what kind of clothes people who required housekeepers wore.

Sure, technically, he could be one of those people, but his mother would have killed him. If he’d got a housekeeper now, she’d probably become undead for the sole purpose of killing him.

And, since he wasn’t ‘one of those people,’ for all he knew Brooke’s silky nightgown and flip-flops were standard attire.

Watching her running after a dog in that outfit lightened some of the tension he felt, but it couldn’t eradicate it completely. In fact, it complicated things. In the days they’d spent together, he hadn’t once seen this much of her. Now he could add the strength of her arms, the width of her thighs, to what he’d been missing.

Get it together, Murphy.

Being an author has always been Therese's dream. It was only when the corporate world loomed during her final year at university that she realised how soon she wanted that dream to become a reality. She got serious about her writing, and now writes books she wants to see in the world featuring people who look like her. When she's not writing, she's spending time with her husband and dogs in Cape Town, South Africa. She admits this is a perfect life, and is grateful for it.