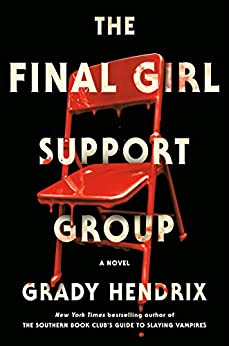 In horror movies, the final girls are the ones left standing when the credits roll. They made it through the worst night of their lives…but what happens after?Like his bestselling novel The Southern Book Club’s Guide to Slaying Vampires, Grady Hendrix’s latest is a fast-paced, frightening, and wickedly humorous thriller. From chain saws to summer camp slayers, The Final Girl Support Group pays tribute to and slyly subverts our most popular horror films—movies like The Texas Chainsaw Massacre, A Nightmare on Elm Street, and Scream.Lynnette Tarkington is a real-life final girl who survived a massacre. For more than a decade, she’s been meeting with five other final girls and their therapist in a support group for those who survived the unthinkable, working to put their lives back together. Then one woman misses a meeting, and their worst fears are realized—someone knows about the group and is determined to rip their lives apart again, piece by piece. But the thing about final girls is that no matter how bad the odds, how dark the night, how sharp the knife, they will never, ever give up.

Momma Says: 4 stars⭐⭐⭐⭐
If you grew up watching horror flicks and loving them, you'll recognize the nod given to several of them in The Final Girl Support Group. Halloween, Friday the 13th, Nightmare on Elm Street... The big bads that kept us looking over our shoulders for days after watching (or was that just me?). Anyway, Grady Hendrix gives us those slashers in one form or another, and the whole thing is wildly entertaining. The story is about a group of final girls who are in a support group together. The premise is over the top and mostly completely unbelievable, but that's what makes it so much fun. There is a mystery, and Lynnette does a lot of running around willy-nilly trying to figure it all out, but things move at such a fast pace, there's not much time to suss out the who and the why if it's even possible. There are a couple of clues, but I don't care to admit that I completely missed them. I was having so much fun picking out the references to favorite slasher movies that I forgot I was supposed to be figuring out who the baddie was. I've been deliberately vague, but there's so much going on in this one that almost any detail would be a spoiler of some sort. So, I'll just say if you loved those bloody slasher flicks, this is one to check out. Just suspend your disbelief and enjoy the ride.