Peril on the Ranch
by Lynette Eason 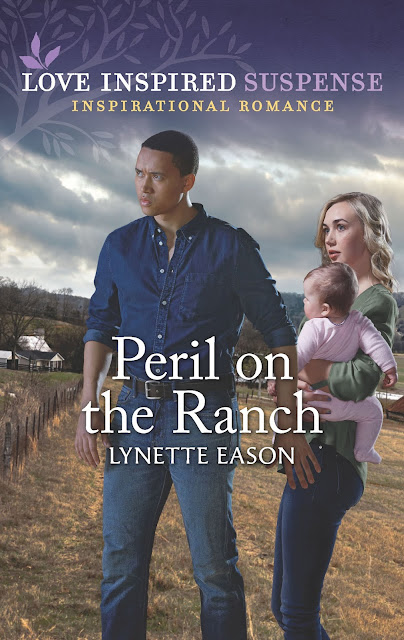 no matter what the cost.

When an infant is abandoned on her ranch, foster mother Isabelle Trent will do anything for the child—even put her own life on the line. She might not know who left the little girl, but it’s clear someone’s after her and will kill to reach their target. With Isabelle’s ranch hand, Brian “Mac” McGee, at her side, can she survive long enough to protect the baby?

Add Peril on the Ranch to your Goodreads!

Buy Peril on the Ranch by Lynette Eason!

Momma Says: 4 stars⭐⭐⭐⭐
Lynette Eason's Peril on the Ranch is a great way to spend a lazy afternoon. The only problem with that is I kept finding myself sitting up and heading toward the edge of my seat with every bit of danger and tension. Thankfully, Lynette Eason blends the danger with some sweet family moments and an emotional love story. Mac and Isabelle have both seen their share of loss, and they along with the kids tug at the heartstrings. In a nutshell, what we have here is an engaging story that's suspenseful, emotional, and inspirational - as I said, a great way to spend an afternoon. The characters are so easy to root for and their story is one of family, faith, and love.
🞿🞿🞿🞿🞿

Mac bolted from the truck just as the sun crested the horizon and spread light around the area. He raced around the side of the house to the back and skidded to a stop. The intruder the owner had mentioned had one foot inside the window and his gloved hands gripped the molding. Mac darted forward, placed his hands on the porch railing and vaulted over it. He landed on the wooden flooring with a thud and faced the frozen figure now half in and half out of the house. “Don’t do it, man,” Mac said. “Cops are on the way.”

His words seemed to send indecision sweeping through the guy. A pause Mac took advantage of. He lunged, grabbed two fistfuls of the hoodie material and pulled him away from the window. A heavy fist glanced off Mac’s cheek. He winced and jerked back, losing his grip. That gave the wiry figure the opening he needed, and he darted away from Mac to dash down the length of the porch, leap over the steps and head full-speed across the pasture. Mac pounded after him.

The guy broke through the tree line and disappeared into the woods. Mac did the same seconds later, only to stop when he realized he’d lost him. Mac turned, listening, his eyes searching. Finally, he heard the crunching of underbrush to his left and headed that way, hit a patch of mud and slid almost falling. He managed to catch his balance, but a second later, the roar of a motorcycle captured his attention. After one last push through tree limbs and vines, he found himself staring at the back of a disappearing bike. He didn’t know where the trail led, but there was no way he’d catch the guy on foot. With a sigh, he gave up the chase and retraced his steps.

When he came to the pasture beyond the tree line, he could see the woman who was, hopefully, his future boss. Isabelle Trent. She stood on the front porch, a little girl about five years old clutching Isabelle’s knee with one hand and a doll with her other. Isabelle cradled an infant in the crook of her right arm.

Dressed in jeans, boots and a long-sleeved red flannel shirt, she had her blond hair pulled into a messy ponytail. It struck him that she looked comfortable and completely in her element. If understandably shaken. Two police officers faced her. One wrote notes in a little black book while the other spoke into the radio on her shoulder. As Mac approached, Isabelle’s green eyes landed on him, and the officers turned. Mac made sure they could see his hands.

“That’s the man who came to the rescue,” Isabelle said.

Lynette Eason lives in Simpsonville, SC with her husband and two children. She is an award-winning, best-selling author who spends her days writing when she's not traveling around the country teaching at writing conferences. Lynette enjoys visits to the mountains, hanging out with family and brainstorming stories with her fellow writers. You can visit Lynette's website to find out more at www.lynetteeason.com or like her Facebook page at www.facebook.com/lynette.eason