How can you write a love song before you’ve felt one?

Roland Finley is convinced he has what it takes to win the Battle of the Bands, a reality TV show where up and coming musicians compete for a record deal. But between college, work, and band practice, he hasn’t had time to experience any of the romance he sings about, and his amateur writing needs a lot of work. This is never more apparent than when a stranger in the park stumbles upon his notebook and tells it exactly like it is.

Jay McClintock wanted nothing to do with this silly reality show, but as the head writer for ALIVE Records, his boss had other plans. After being tasked with writing and coaching one of Roland’s biggest rivals behind the scenes, the only thing keeping him sane is teasing the strange (and low-key talented) young writer he encountered in the park.

Writing for the enemy should have been no big deal, but the more Jay accidentally (and not-so-accidentally) runs into Roland, the harder it is for him to come clean about his involvement with the show. Fortunately, there’s one medium through which they both know how to communicate: Song.

My heart was beating in perfect time with the crowd’s applause. Quick, loud, chaotic, completely out of control. A bead of sweat slid down my cheek, caught on my jawline, and dripped off my chin. I didn’t know if it was from my nerves or the heat of the blaring neon lights overhead. I can barely believe we’ve come this far. Would I be here if not for him?

No. Don’t think about him right now. I can’t. He doesn’t deserve a place on this stage with me. He never did. This is my one chance, and I’m not going to screw it up because of him.
I gripped the mic firmly and swallowed hard.
“I hope you’re ready to rock, Los Angeles!”

“Habanero Marmalade? What kind of a name is that?” Logan shoved another bite of garlic bread in his mouth, mumbling words between chewing.

“It’s the kind of name that people will remember. A little ridiculous, but also…deep. Poignant. Clever.” I leaned forward over the table, and I mentally deconstructed all the signs in the food court to spell our name. Using the Habanero from Habanero Juan’s and the Ma from Mama’s Pizza made for a fairly respectable logo.

My guitarist had no class at all, clearly.

“Well, what do you want to call us then? If you’ve got a better idea, I’m all ears.”

“How about Death Ringer or Dragon’s Fury or something badass like that?”

“What? No. We’re not a metal band. We’re supposed to sound edgy, not like we eat children.” I stole a piece of garlic bread out of his tray and crushed it between my teeth as a symbolic display of my disappointment. Also, as a less symbolic display of the fact that I couldn’t afford lunch that day. “Look, as the writer and lead singer, I think I know more about what sounds good to people than you do.”

“Whatever, Roland.” Logan waved a hand in the air as if to knock away my self-importance. “You can have all the say you want as soon as you come up with something better than Hot Orange Jelly.”

“Fine.” I rolled my eyes. “But we need to have this settled by Friday if we’re really going to audition for the Battle of the Bands.”

“That’s four whole days away. Plenty of time.” Logan crammed an impressively large spindle of spaghetti into his mouth before he stood to toss out his tray. “All right, back to work.” He ran a hand through his hair and retied his bun to make sure it was neat and kempt enough for the jewelry shop. He was so tall, lean, and good-looking. I could only imagine how many diamonds he sold with his smile alone. Or how many relationships he broke up with a well-placed wink.

He gave me one last grin before he headed back. “The girls’ volleyball team has a game today. Go walk on over and find something more inspiring than your grandma’s pantry.”

Right. Because a bunch of jocks knocking a ball around is so inspiring. But despite my protests, we were going to have to agree on something if we were going to enter this competition. The Battle of the Bands was more than just a silly reality show. It was a chance at a dream in a world convoluted with fellow dreamers. If we could stand out there, we could stand out anywhere. But I needed Logan to take it seriously first. And I needed to figure out a name.

We had been through a couple of names already: Cheese and Cracker (my idea), Log Rol (his idea), Raining Soup (my idea), Dos Vikings (his idea), PIE-tastophic (my idea. In hindsight, I should probably stop coming up with band names while I’m starving). Having had no success with building a fan base doing local gigs, we both agreed that it would be good to get a fresh start for our TV debut. But I swear to God, coming up with names was the hardest part of being an artist.

I shook my head and grabbed my notebook. He was right about one thing, anyway. A walk would do me some good.

I left the mall and strolled back toward campus, cutting through the park on the way. I always liked this park. Birds chirped and whistled in the trees, creating the perfect ambience for deep thinking. Birds were what inspired me to sing in the first place. All those days sitting in my mother’s garden, listening to their high-pitched calls, watching them fly wherever they wanted to go. Their voices were the battle cry of freedom. Singing was freedom.

I glanced at the trees and whistled my best mockingbird call. Almost on cue, a mockingbird took to the sky. It flapped its wings to the music. Beautiful. I whistled again, and it came toward me. Closer. Closer.

Wait a second—too close! The bird swooped down and knocked into me with its wings. My notebook flew from my hands as I instinctively swatted it away. I always forgot that mockingbirds were assholes.

Once the bird flew off, I collected myself and looked for my notebook. A man stood before me, tall, poised, and sophisticated. He had frameless rectangular glasses that sat on a perfect nose, framed with light-brown hair that fell stylishly unkempt around his face. One of his black leather dress shoes sat pointedly atop my open notebook.

He reached down and picked it up. I watched on, dumbfounded, as his sharp blue eyes moved back and forth over the pages.

“Don’t read that—that’s private!” I heard my voice ringing entirely too loudly in the air, causing the remaining nearby birds to scatter. Something about the sky full of fleeing sparrows, surrounding this dark figure, felt like an image out of horror movie. Like he was an evil sorcerer learning all my secrets before promptly taking over the world.

“I can see why.” His voice was deep and smooth. “I wouldn’t want to share this drivel with anyone either.”

“It’s not…” I was too shocked to figure out how to respond. There was months of work in that notebook. My prized lyrics. My potential band names. Hand-scrawled sheet music. Everything that made up my hopes and dreams.

“I’ll shoot right past the goalie of your love. My puck in your net. Points on the headboard… Are you fucking serious?” He shut my notebook and tossed it over his shoulder, shaking his head in disgust all the while. Hearing my lyrics recited out loud was triggering all my fears and insecurities. Who the hell does this guy think he is?

“It’s supposed to be provocative…” I mumbled under my breath, averting my gaze so he couldn’t read the hurt in my eyes. “Th-that’s just the first draft. It was going to get way better before the competition.” I didn’t know why he was being so harsh anyway. Any words would sound like garbage if you said them like that. Any words… Right?

He walked past me with his hands in his pockets, his eyes hidden by the glare of the sun on his lenses.

“Find another hobby. You’re wasting your time.” He gave me one last kick in the heart before he stepped out of earshot. I watched as he walked away. 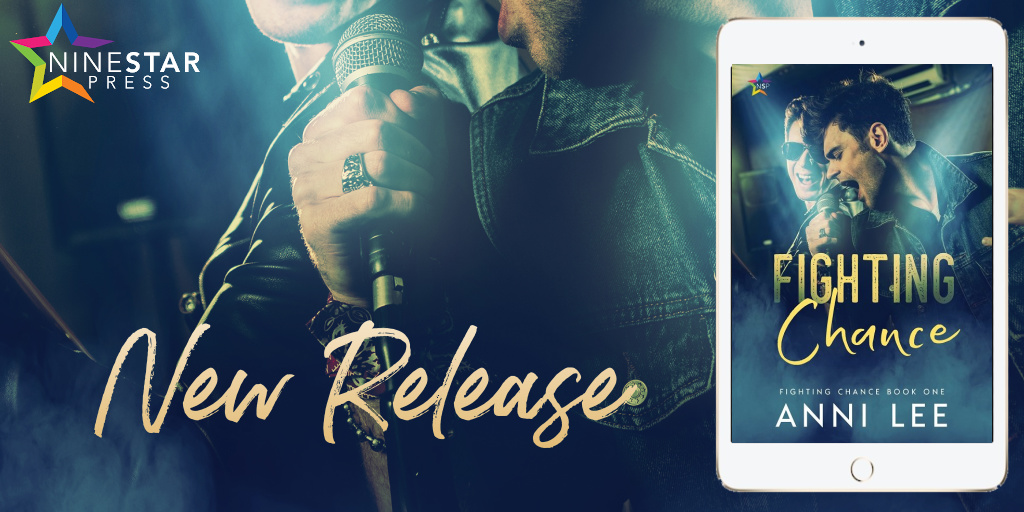 Whether she’s racing motorcycles faster than a RomCom lead’s beating heart, or scuba diving deeper than the pit of love they fall into, Anni Lee is always down for an adventure. She was born and raised in Los Angeles with four siblings and a single mother, which is probably why she has such a penchant for writing big city love and tenacious (albeit dysfunctional) heroes.

When she’s not typing away behind her laptop, she’s living out of a tent off the back of her motorcycle on her quest to ride around the world. The wilderness is the best place to catch up on reading, after all!