The Blind Effect Tour and Giveaway 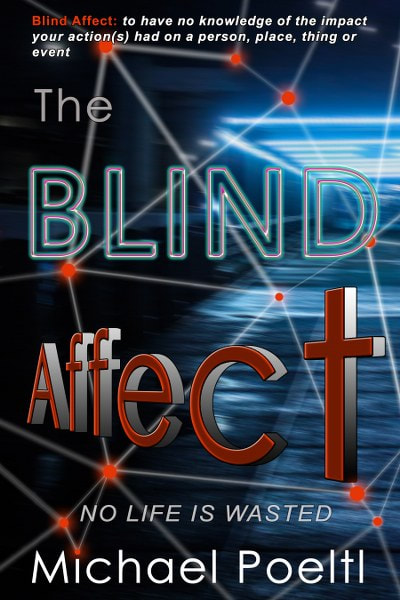 Diversity, inclusion, and equality are at the heart of this character-driven story. While difficult and heart-breaking lessons await Jonah, Severn, and Darnell in their own lives, a shared event along a similar timeline links all three despite their glaring differences. Caught in the gravity of the event, purpose presents itself and their shared blind affect validates the notion that no life is wasted.
The Blind Affect explores the purpose behind existence - the reason we take our first breath, and the rationale behind all the drama leading up to the moment we breathe our last. It is a walk on the wild side of family life and the events, people, and places that make us who we are.
As Jonah reflects on his life an asymmetrical pattern featuring a thousand shades of grey appears as if caught up in a fragmented kaleidoscope - the introduction of any colour negated for fear of denoting some appeal. He’d lived a fruitless existence built around fear and addiction, the blueprint to his life; his twin brother stillborn moments before Jonah’s birth. The guilt he harboured over his brother’s death kept him sedated. His mother’s overprotective parenting supported this inertia. An addict, Jonah struggled through life seeing multiple therapists over his seemingly endless issues until a chance meeting attempts to rewrite his abject history.
Severn was born in a Christian home with an alcoholic mother whose addiction became intolerable after Severn’s father died when she was ten. The affluent lifestyle she was accustomed to remained, but her family life collapsed soon after, leaving her to fend for herself. One fateful night in 1973 Severn was abducted, and any issues she’d had with her past paled in comparison to the life she was forced to endure.
Darnell had it tough his whole life. At 17 his abusive father was killed in a raid on his illegal business, while Darnell’s mother had been shot dead the year before. Discovering a large sum of money upon his father’s death offered Darnell the opportunity to flee his impoverished neighbourhood and change his luck, and that of others along the way.
Lives are lived and lost ubiquitously, these three just so happened to be in the same city along a similar timeline. Can life be more than the sum of one’s own experiences?
Goodreads * Amazon

It was a difficult pregnancy. That's how his mother described having Jonah and his brother Jack in her womb. "The two of you were always play-fighting in there," she explained, her slender hand motioning to her now trim waistline, her tone more cheerful than usual. "It was very uncomfortable, but I put up with it. I told you both to get it out of your systems before I came in and gave you a smack." She placed her cigarette on the edge of an empty beer can and picked up a glass of something stronger than beer. She took a hard swallow, picked up the smoke and sucked the end, held the smoke in her lungs a moment, then exhaled, the sadness given room by her escaping breath. Jonah watched the smoke fill the kitchen. He liked how it swirled around and even how the smoke continued to fall out of his mother's nostrils. He could take or leave the smell, but everything he wore smelled like his mother, which was comforting. The little breakfast nook was lit by the sun pouring through the kitchen window and the white lace valance that made oblong circles on the floor. His mother picked a rogue bit of tobacco from the end of her tongue and studied it. Spirit in the Sky by Norman Greenbaum came on the radio. The radio was always on at a low volume. It kept her from thinking too much, she’d said. She turned it up. A smile and a far-away look accompanied her humming along to the song.

“How long was I in there?” Jonah asked, seated on a wooden chair, pulled close to his mother’s, their knees practically touching. She looked at him disapprovingly. “You were both in there nine months, Jonah. You and Jack.” She never forgot about Jack. Jonah forgot on purpose. He wanted his mother to himself. She always brought up stupid old Jack. Jack, Jack, dead old Jack. “He’s dead!” He wanted to scream this in her face. As if she didn't know. Wasn't it enough they visited his grave every Sunday, and took a picnic, and stayed there for three stupid, wasted hours at a time? Meanwhile, Jonah couldn't do anything right, and he certainly wasn't allowed to do anything fun. Homework at the green laminate table, pencil sharpening’s, and eraser bits dotting the swirly pattern. Then, less lucid, T.V. and dinner, mostly shoveled down or scraped away. Then the inside of his room, the escape. The posters on the wall the only spark to his imagination and the only essence of the outside world. He was real, but he didn't feel real when she was alone with her glass, and he was alone, alone. He would sneak peeks at the street beyond the window and see boys racing their bicycles up and down the road, or maybe climbing the large maples that lined the boulevard. A world of fun and exploration awaited anyone bold enough to venture outdoors. What if I fell out of one of those trees? What if the wheel came loose from the bike? What if, what if, what if, what if. It was exhausting to think about. But she was his mother, and he loved her for so many other reasons. Like when she would trace her fingers along his small face, ending at the tip of his petite nose, telling him what a handsome little man he was. That was a favourite for him. He felt loved and safe and warm under her playful eyes.

Born in Toronto, Canada, Poeltl went on to study fine art and illustration, honing his love for storytelling while working as a freelance illustrator. Soon the art of writing overtook his artistic pursuits and his stories found their voice.
Michael Poeltl is a multi-genre author with several books ranging from a post-apocalyptic trilogy, science fiction trilogy, upmarket fiction, children’s fantasy, picture books, and educational children’s books. Poeltl’s illustrations feature prominently in his picture books, connecting him to his artistic roots.
He enjoys the processes that drive creativity whether it appears as a conversation in his head while enjoying time outdoors in his kayak or mountain bike, or as a random thought that might otherwise be lost were it not for that napkin on the table or phone in his pocket. If the artistic endeavor has taught him anything, it’s that inspiration can happen anywhere and at any time. All he can hope to do is record it before it slips back into the ether.
Website * Facebook * Twitter * Instagram * Bookbub * Amazon * Goodreads

Follow the tour HERE for special content and a giveaway!
$15 Amazon – 1 winner,
ebook of The Blind Affect – 5 winners!
a Rafflecopter giveaway