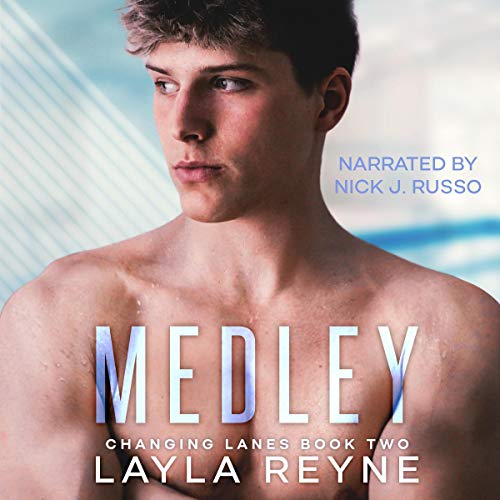 Sebastian Stewart was never Mr. Dependable; he was more the good-time guy who only wanted to swim, party, and ink tattoos. Until he cost his team the Olympic gold four years ago. Bas is determined to do right this time around - by his medley relay team and his rookie mentee.

Jacob Burrows is in over his head. The Olympic experience - from the hazing, to the endless practices, to the unrelenting media - makes the shy nineteen-year-old’s head spin. He’s trying to be everything to everyone while trying not to fall for his gorgeous tattooed teammate who just gets him - gets his need to fix things, his dorky pirate quips, and his bisexuality.

When Jacob falters under the stress, threatening his individual races and the medley relay gold, he needs Bas’s help to escape from drowning. Bas, however, fearing a repeat of his mistakes four years ago, pushes Jacob away, sure he’ll only let Jacob down. But the only path to salvaging gold is for Jacob to finally ask for what he needs - the heart of the man he loves - and for Bas to become the dependable one.

Momma Says: 4 stars⭐⭐⭐⭐
It's been a while since I've been so frustrated with a romantic couple and still wanted to see them together. But that was the case with Bas and Jacob. Both of these guys have pasts that affect how they look at relationships as well as how they look at themselves. Jacob is only 19, so his insecurities are right there at the surface while Bas has buried his deep enough that he doesn't have to look too closely. As these two tiptoe around each other with an almost constant push and pull, they nearly drove me to distraction. I kind of wished for someone to just lock them in a room together and refuse to let them out until they figured it out. Needless to say, that didn't happen, and the result is drama, drama, drama for this pair. Oddly enough, even when these guys irritated me, I liked them. I certainly didn't always like their decisions or actions, but I liked them, and I liked the chemistry between them. Of course, I liked them as secondary characters in the first book in the series, so it was easy to start this one with those feelings. This book does pick up where book 1 left off, and while the focus is one a different couple, the story continues. Nick J Russo is also back to voice the characters for this second book, and as expected, he does it wonderfully. From 19-year-old Jacob's insecurities to the more jaded Bas and his gruff attitude about relationships, Russo gives us all the emotion of the story. What it comes down to is this couple may have driven me crazy, but it was so worth it in the end.