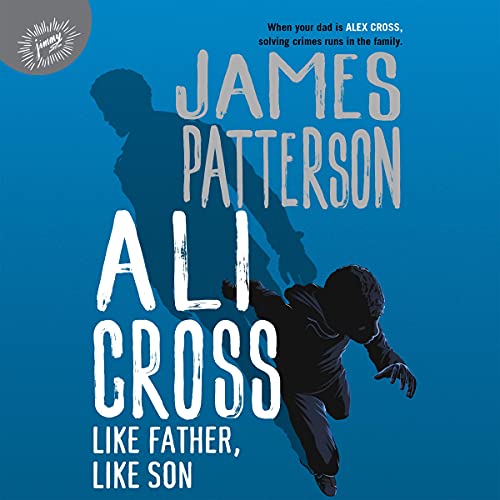 Alex Cross’s son Ali is an accomplished mystery-solver and number-one best-selling author. A crime at a concert near his school sparks his newest investigation, and it gets dangerous fast. Sometimes it’s good to have a father in the detective business.

Ali Cross just solved his first real case. Alex Cross knows it's only a matter of time before his son finds his way into more trouble. Neither of them expected Ali to get caught up in another case so quickly. Ali and his friends were just hanging out in Anacostia Park...then they became witnesses to a crime. Alex wants Ali to stay far away from the investigation. But Ali isn't going anywhere, not when his new friend Zoe is in trouble. It's up to Ali to figure out why she's lying to the police - and who she's protecting. This is Ali's toughest case yet. As long as he trusts his Cross instincts, he may just have a shot at solving it....

Momma Says: 3 stars⭐⭐⭐
I read James Patterson's books regularly for years, particularly the Alex Cross series, but I kind of tapered off when things changed - the writing felt different, and some of the storylines were way over the top. My 2 mid-grade readers and I did enjoy the Maximum Ride series, so I thought this one would be a good one to check out. My 14-year-old and I listened to this one together, and we both came away with mixed feelings. He liked the idea of a kid solving mysteries, but neither of us was thrilled with some of the behaviors like lying to his parents and great-grandmother. Even my son pointed out that Ali isn't much of a role model for kids, and I would have to agree. I realize kids find their share of trouble, and I can understand making mistakes, but willfully lying is a hard limit for me. Patterson does touch on some prevalent issues, which keeps the story current. It also feels like a political soapbox at times, and whether I agree or not, I don't feel like it's needed in a mid-grade book.
This book does have the short chapters and fast pacing of most Patterson stories, and my mid-grade kiddos appreciate those short chapters when they're determined to get in one more before bedtime. The narrators Zeno Robinson and Wayne Carr give a good performance. They keep the story fresh and entertaining, and the boy and I both enjoyed the narration. In the end, this one had things I liked and things I didn't, and I'm still on the fence about whether or not we'll continue with the series.