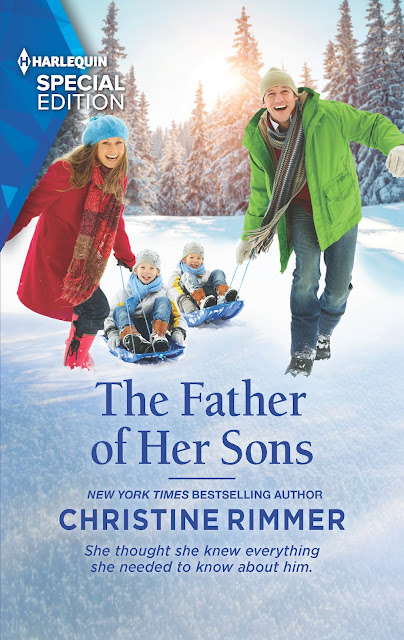 She thought she knew everything she needed to know about him in New York Times bestselling author Christine Rimmer's first book in the brand-new Wild Rose Sisters series!

How do you make up for four years of lost time?

No last names. No promises to meet again. No way for Payton Dahl to find the man who’s the father of her twin boys. Until fate reunites them four years later. Easton Wright now wants to be part of his sons’ lives—with the woman he fell hard for during those seven days and nights of bliss. Payton doesn’t want her sons to grow up fatherless like she did, but can she risk trusting Easton when she’s been burned in the past?

Add The Father of Her Sons to your Goodreads!

Buy The Father of Her Sons by Christine Rimmer

Momma Says: 3 stars⭐⭐⭐
The Father of Her Sons is a pretty laid-back, easy-going story for most of the book. There is that required bit of angst but not until the last part of the story. This one does require some suspension of disbelief - I'm not saying it's completely impossible, but I'd go so far as to call it darned improbable. That's not a dealbreaker by any means. I liked the characters and I'm a sucker for a single-parent romance as well as surprise baby. I guess this is more surprise kiddos, but it amounts to the same. Payton and Easton are really good as a couple, and I enjoyed the easy pacing of this love story. This is also the first in a new series, so I'll be interested to see what's next for Christine Rimmer's Wild Rose Sisters series.
🞿🞿🞿🞿🞿

It all started with a little innocent flirting.

And okay, yes. Payton Dahl had given up flirting. Flirting too easily led to fooling around. Fooling around often became romance and right now in her life, she had no time at all for romantic entanglements—not even brief ones, which were pretty much the only kind she’d ever known. She spent her nights tending bar and her days either helping at the family farm or huddled over her laptop.

For more than nine months, from January well into October, Payton had stuck with her plan to avoid men altogether. Yes, she’d been tempted more than once by a sexy smile or a smoldering pair of bedroom eyes. She’d kept her eyes on the prize, though. She’d said no to temptation. Payton had stories inside her head. She intended to get them written down. That required discipline and for months, she’d exercised strict self-control.

But then, on a Wednesday night in mid-October, a whole new level of temptation came calling, one that had irresistible written all over him.

That particular Wednesday night, the Larch Tree Lounge at the Heartwood Inn was deader than a frozen doorknob. In one of the booths, a very tired looking middle-aged couple argued in whispers without much enthusiasm. Cletus Carnigan, a nightly fixture in the lounge, sat slumped at one end of the bar gazing mournfully into his Logsdon Lager.

As usual, it promised to be a very long night—until a tall, broad-shouldered stranger with tousled dark blond hair and cheekbones sharp as knives in his stunning, angular face took the stool at the opposite end of the bar from Cletus.

No flirting, Payton sternly reminded herself. Pasting on her most professional smile, she marched down the bar to greet the smoking-hot newcomer. “Welcome to the Larch Tree Lounge. What can I get you?”

He ordered Redbreast Irish Whiskey, an admirable choice—both good quality and excellent value for the money. “And something to eat,” he added. “What’s good?”

“Right off the bat with the loaded question,” she muttered under her breath.

He narrowed his gorgeous blue eyes at her. “Is there a problem?”

“Sort of.” Unfortunately, not much was good at the Larch Tree Lounge. And while Payton despised lying to her customers, telling a guest that the food sucked wouldn’t do, either. She settled for evasion. “What are you in the mood for?”

He studied her face at length. She stared right back at him for way too long while hummingbirds flitted around in her belly and an electric current went snapping and popping beneath the surface of her skin. Finally, he folded his lean hands on the bar, canted toward her and spoke confidentially. “It’s all bad. Is that what you’re telling me?”

So much for evasion. What now? She didn’t want to lie about the food, but she didn’t want to get fired, either. Her best option at this point? Maybe a recommendation. The burgers were passable. “How about a burger?”

He was hiding a grin. She could see it kind of pulling at one corner of that fine mouth of his. “An honest woman.”

​A New York Times bestselling author, Christine Rimmer has written over ninety contemporary romances for Harlequin Books. Christine has won the Romantic Times BOOKreviews Reviewers Choice Award and has been nominated six times for the RITA Award. She lives in Oregon with her family. Visit Christine at http://www.christinerimmer.com.