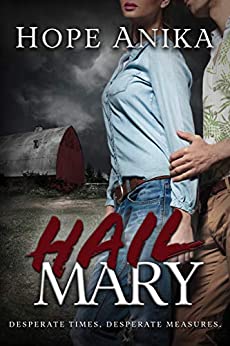 “Hardy har har,” Wynn retorted. “How did it happen?”

“How did what happen?”

The growl in his voice probably cowed a great many folks. She didn’t happen to be one of them. Even if he was big and intense and talked about delivering death like it was the mail. “Your leg.”

He didn’t respond. Instead, he stood at the sink and stared out into the storm.

“Is it a state secret?” she wanted to know. “A matter of national security? An injury suffered while on a clandestine mission that you can’t talk about under penalty of death? Did they make you swear on a Bible?”

His gaze fell to her mouth, and awareness speared through her, a hot, electric slide that made her cheeks burn.

When a local bank robbery brings newly elected Sheriff Beau Greystone to Wynn Owens’ front door, she has only two things to give him: the endless bounty of her caustic wit and a one-finger salute. Wynn has history with the law, none of it good. And the notion that one of her elderly tenants might have something to do with the robbery is just plain crazy.

A former DEA agent, Beau owes his newly minted badge solely to his meddling aunt and his own foolish indifference. Recovering from the murder of his wife—and the debilitating injury caused by the explosion that killed her—Beau has been happily checked out for some time. But the people of Blossom Hills are counting on him to do his job, and bringing a bank robber to justice is a fine place to start…until the killer that's haunted the town for the last decade abruptly returns.

Wynn has a tenant to exonerate; Beau, a killer to catch. Neither is prepared for the compelling but unwelcome current between them, or the unexpected circumstances that will force them to reassess the rules by which they live. But the clock is ticking, and they must decide: adapt and evolve, or surrender to the past and the dark malevolence that has risen within it….

A steamy thriller with characters you won't forget…romantic suspense at its best.

"Sexy, suspenseful, and surprisingly funny. I couldn't put it down!"

"Nobody, but nobody writes a book like Hope Anika!"

Momma Says: 4 stars⭐⭐⭐⭐
Hail Mary is a romantic suspense/thriller with a serial killer on the prowl. I like that the whodunit part of the book is somewhat solvable - unless I missed something, there are things I couldn't even guess at until the reveal, but I did guess the identity of the villain. Of course, there are a couple of red herrings to keep a reader pondering, and they're pretty good ones.
This little town where everybody knows everybody is pretty busy with crime, and the serial killer isn't the only thing the new sheriff has to take care of. And that brings me to the best thing about this book... Don't get me wrong, the suspense was good - a little slow to take off but it kept my interest. That said, it's the characters that really stand out. Hope Anika has created a story filled with absolutely terrific characters. From Beau and Wynn to Wynn's tenants to her smart-mouthed sister... The list goes on, but my point is that these characters are so well done that they feel like people I'd want to know, like people you might run into at the grocery store. Granted, there are a couple of baddies that I'd just as soon not run into, but good or bad, there are no throwaway characters here.
The romance is a slow burn, but the chemistry between Beau and Wynn is strong from their first meeting. They do their share of butting heads and Wynn's sharp tongue keeps Beau on his toes. Rather than slip into spoiler territory, I'll just say Hail Mary has a lot more going on than I expected, but the author brings it all together, and the flow is steady all the way through. It is a romantic suspense, but it's also a story of family, friendship, loyalty, second chances, and finding your place in the world.