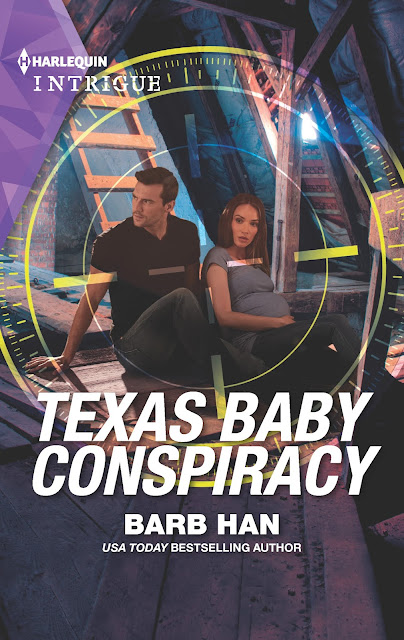 Injured and locked up in a decrepit trailer, Alyssa Hazel wakes to only fragments of memory. She knows she's pregnant, her life is in danger—and there's one man she can trust once she escapes. But police officer Blake O’Connor hasn't forgiven Alyssa for walking away from their marriage. Can he protect her and their unborn child…even when this conspiracy hits too close to home?

Momma Says: 4 stars⭐⭐⭐⭐
A kidnapping, a pregnant heroine with amnesia, and a sexy lawman hero - hard to say no to all that. Add in lots of action, tension, and suspense, and Texas Baby Conspiracy is a page-turner. Alyssa and Blake are likable and they have good chemistry, but the story is more suspense than romance. I guess I'd call it romance light - it's no less interesting for it, but the focus is on the mystery and danger. I've come late to this series - this is the fourth in the series but my first read. That said, I had no problems keeping up with everything going on, so I'm gonna go out on a limb here and say this 4th book can be read as a standalone - Fair warning: now that I've read this one, I'm adding the first 3 to my TBR, so I'll be reading those as well. All in all, Barb Han has penned a pretty darn good mystery here, and I'll be interested to see what she does next.
🞿🞿🞿🞿🞿

When Alyssa Hazel stirred and felt nothing but walls on all four sides of her, shock robbed her voice. Panic caused her pulse to pound and the extra blood thumped against her skull. Her head threatened to split open as she tried to recall where she was and why she was here.

She pushed her hands out, trying to see if the walls would give. The material was pliable but solid enough to hold form. She felt for cracks or anything she could grip. Movement hurt. She attempted to stretch out her legs and couldn’t get very far.

Where was she? What happened? Why was she enclosed in such a tight space? A haze pressed down on her brain and the pressure was the equivalent of a thunderstorm rolling in.

It was pitch black and she couldn’t remember a thing about where she’d been or what she’d been doing before ending up in this…whatever this was. Forcing recall only made her brain hurt more. A stomach cramp drew her legs tighter to her belly.

Wouldn’t there be a door if she was in some kind of compartment? There would have to be a crack around a door or hatch. She reached up and couldn’t find a ceiling. That seemed like the first good sign so far. It meant that she might be in a small closet or storage room.

She felt around, trying to get her bearings because right now she was at a loss as to where she was and what she was doing there. Bringing her hands to cradle her stomach, she knew one thing was certain, she was pregnant. Very pregnant. Her belly was huge.

Again, her mind drew a blank to a question that was so basic she felt like she should have an answer. What on earth was she doing there? She brought her hand up to her head and looked for a reason for the memory loss and headache. She touched a tender spot and felt dried blood.

At least she thought it was. Seeing was impossible despite her eyes adjusting to the dark.

Logic said if she’d gotten inside this structure, there had to be a way out. Bracing her hands against thin walls, she maneuvered up to a sitting position.

Next, she instinctively checked to make sure she had on clothes and then immediately checked for her wedding ring. The band was gone. Thank heavens she had on a cotton shirt and jeans. No shoes but she did have on socks. She remembered wearing her favorite boots. The random memory seemed to float around with no context to ground it. Where had she been going? What had she been doing?

A noise startled her. She froze, unable to make out what it was or exactly where it came from other than out there.

USA TODAY Bestselling Author Barb Han lives in Texas with her adventurous family and beloved dogs. Reviewers have called her books "heartfelt" and "exciting." When not writing or reading, she can be found exploring Manhattan, on a mountain, or swimming in her backyard.