Far from Home is a collection of twelve short stories, taking the reader on a journey from the desert sands of the Middle East to a forbidden Caribbean island, and many points in between.

Though two of the stories are set in the U.S., others find gay people dealing with gayness in Saudi Arabia, Bahrain, Spain, Turkey, Cuba, Mexico, and the Netherlands, places where the characters are physically and psychologically far from the comfort of home. Most of the stories focus on Gay men suffering alienation, confusion, violence, and loss in the eternal search for love while they travel or live in other cultures.

The overall focus is on LGBTQ people as they venture out into the world.

It’s a coffee-colored afternoon: thick, murky, unsweetened, bitter, poured in a long stream from a dallah, hot but cooling rapidly. The air is the color of cardamom seeds, their skin, their eyes. This time of day the same dull brown coats the inside of his head after a rising time of 4:30 a.m., fumbling in darkness to strangle the alarm. He sees the days, weeks, months stretched out in front of him, a path paved in riyals, leading him through the wan desert and, he hopes, toward an oasis. Or is it only a mirage? How much longer does he have to be in the Kingdom? He glances at his watch, calculating the amount of money he has made in the last hour, a pittance compared to the CEO of the international company he works for, though for him and his pre-Saudi life, a fortune.

A thunderstorm that morning flashed out of the murky sky, pummeling this flat wide expanse of beach with a long rain. Rainstorms in the desert are a new phenomenon for him. For days a ceiling has pressed down lower and lower, alternately dropping and holding back its holy water, instantly sullied by its touching of the land. A chain of dirty puddles formed upon a resistant ground, hurrying to stagnation, calling mosquitoes to come perform their pagan rituals of breeding. Garbage, carried by the wind, strewn across the sand, has summoned flies and maggot producers of all types. He steps gingerly toward the sea, avoiding broken bottles and rusting cans, happily less vulnerable in his sneakers than the Saudis in their sandals.

His eyes squint against the gritty air, and pluck from this soiled landscape a man of fine features, an apparition, his white shalwar kameez fluttering in the breeze, bushy dark hair uncovered, not Saudi, Urdu speaker most likely by his attire. But he is real. His beckoning smile cleans the air and calms the American’s rancor, transforming it to the far more dangerous trap of desire. What had he been angry about? He doesn’t remember. No doubt a minor annoyance due to an inexplicable part of his host country’s culture.

“Hello,” the man says, tugging lightly on his thick mustache. “Where you from?”

Adil releases his hand and touches his heart. “Nice to meet you,” he says in a beguiling accent. The sun attempts to burn its way through the cloud cover, but the Pakistani’s black eyes are already shining, providing light. “What you do?”

“Me, too. Watch out.” He points out a piece of glass. He’s wearing dressy black boots. “My day off I come here to visit friends.”

“I’m at the Navy base. I teach English.”

“Oh, maybe you help me with my English.” Eyebrows rise high above his smile, white teeth, suggesting an exchange of some sort. “We go have coffee?”

“Yes, but please, no Arabic coffee.”

They walk back to the corniche and cross to the shopping center on the other side. Just inside the entrance to the bustling center with a lofty roof of skylights is a café, tables between planters filled with lush plastic plants. They order cappuccinos and sit in the male section separated from the smaller family section where several women sit, black shadows of human form you can see through the latticework dividers if you are so inclined.

Adil glances toward the family section. “Are you married?”

It is always one of the first questions. Trick question. Mark wonders what the correct answer is. He can say he was, but he’s divorced now. Or never married. He decides on a simple no. “And you?”

“Not yet. I work here to finish my contract, then I go back and get married.” He shows his pearly white teeth again. He’s old enough to have crow’s feet, a few strands of gray in his hair. He wears the kameez open halfway down, his hairy chest peeking above his tank top.

A man in Western clothes, Mediterranean looks, passes by, looks up, and shouts an angry threat. The pigeon takes flight as do several others who have been cooing on the rafters. The man goes to the counter and asks for a napkin, brushes his shoulder. Adil laughs. “Maybe is good luck for him,” Adil says. “Let’s go for a drive. Prayer call is coming.”

“No. That’s cool.” Mark, despite being much higher in the hierarchy of foreign workers, relies on public transportation. As they exit, Adil puts his hand lightly on Mark’s lower back, entreating him to go first out of the cool into heat. The sun has made a brief appearance but is dropping behind the layer of haze, perpetually lounging on the horizon. They walk side by side. High in the minaret a speaker crackles and a voice begins. It is the Asr prayer call.

Adil turns to Mark with a smirk. “Not today.”

“Because I meet a new friend.”

Movement surrounds them as shops close. Screeching metal doors slide down tight tracks cutting through the damp air, sounding like screams until they are drowned by the sudden shot-like explosion of the fully extended doors striking the pavement. From across the street comes the clang of gates brought together and the eerie rattle of a chain joining them in a clumsy embrace. The sounds echo up and down the block as a car speeds by on the corniche, honking at each intersection sending shadowy figures scurrying, gripping more tightly the plastic shopping bags dangling from their wrists. Men duck into cars and alleys as the scarves on their heads flap with the sudden haste.

“Come on,” says Adil as he picks up the pace, and a short time later stops at a car. “Ta da!” It is not pretty. The white Nissan is several years old and suffering from the sea air. “This is my baby. Don’t laugh.”

They get on the road out into the desert. Mark has no idea where they’re going or if he’ll ever make it back, something he tries not to think about as he sits in the death seat with a mad Pakistani at the wheel. Adil reaches over and opens the glove compartment. “Look in there. Poems I wrote. Go ahead. Look.” 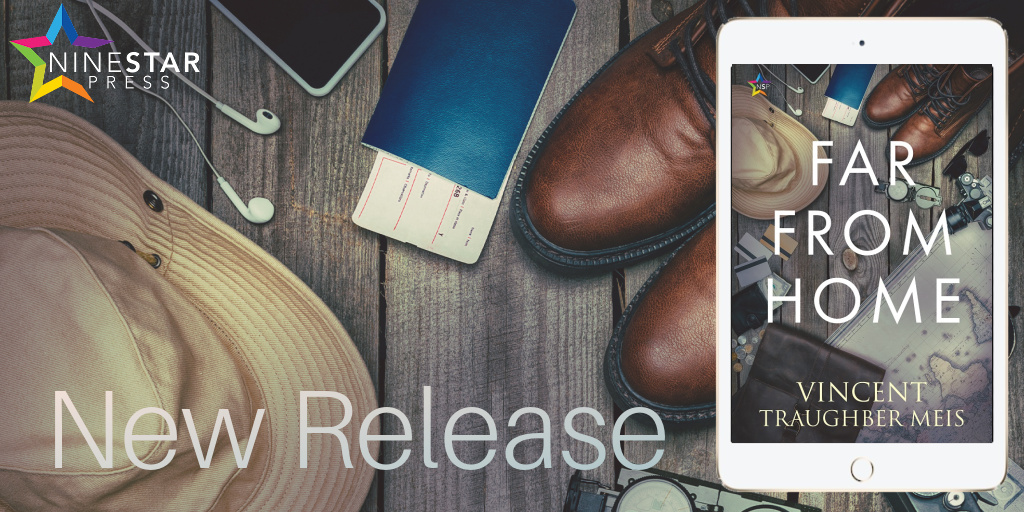 Vincent Traughber Meis started writing plays as a child in the Midwest and cajoled his sisters to act in performing them for neighbors. In high school, one of his short stories won a local contest sponsored by the newspaper. After graduating from college, he worked on a number of short stories and began his first novel. In the 1980’s and 90’s he published a number of pieces, mostly travel articles in publications such as, The Advocate, LA Weekly, In Style, and Our World. His travels have inspired his five novels, all set at least partially in foreign countries: Eddie’s Desert Rose (2011), Tio Jorge (2012), and Down in Cuba (2013), Deluge (2016) and Four Calling Burds (2019). Tio Jorge received a Rainbow Award in the category of Bisexual Fiction in 2012. Down in Cuba received two Rainbow Awards in 2013. Recently stories have been published in three collections: WITH:New Gay Fiction, Best Gay Erotica Vol 1 and Best Gay Erotica Vol 4. He lives in San Leandro, CA with his husband.