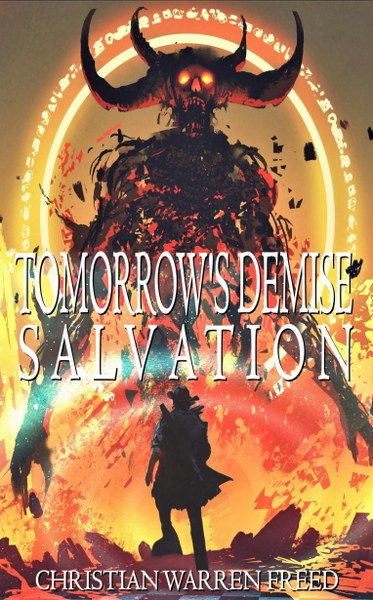 Tomorrow's Demise comes to a thunderous conclusion with Salvation!

The Extinction Campaign has ended in miserable failure. What remains of the vaunted 76th assault division limps back to Black Tide. Rendered combat ineffective by the Berserker ambush, they are eager to depart Helscape. Through the ashes of that battle come the survivors. Broken in spirit and body, men like Aradias Kane and Nathan Bourne struggle to understand what has happened. Hope and despair clash for domination as the Wastelands prepare for the final Berserker invasion.

Yet all is not lost. A band of would be heroes emerges. Led by Kane, they follow the enigmatic pirate lord Thalon Zimbele to the east. He leads them to the town of Redemption where the last wizard awaits. Ganelin D’amala has waited several lifetimes for his chance to atone for the sins of his kind. With death closing in, this is his final opportunity.

Over lakes of lava and across endless deserts the war-weary band travels. Their destination is the hidden Berserker Hive. In this final battle for the fate of the world, heroes will rise and fall. They move with sure purpose but the Berserkers will not go quietly. For both sides there can be only one of two possible recourses: salvation or death.

Started in The Extinction Campaign, Salvation concludes in a knock-down, drag-out brawl for the fate of Helscape. You won't want to miss this one. Grab your copy today! 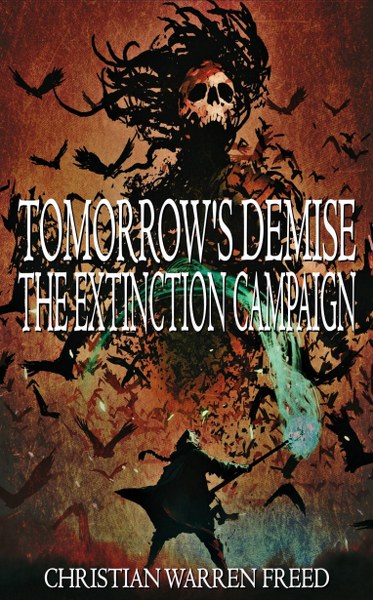 IT IS A TIME OF MONSTERS, MAYHEM, AND THE STRUGGLE TO SURVIVE.

Tomorrow’s Demise: The Extinction Campaign combines all the greatest in the genre, from Star Wars to Dune, to the Malazan Book of the Fallen. Filled with battles and the unique perspective of a combat veteran, this story is a cross between a fairy tale and a nightmare, where your imagination is the only thing holding you back.

Some men are destined for greatness. They become the stuff of legends.
Aradias Kane was a child when he watched Berserkers kill his family. Vowing revenge, Kane became a Slayer: a nomadic order of men and women dedicated to removing the Berserker threat from the Wastelands of planet Helscape. Kane’s adventures take him across the desert, gathering others to his cause. It is a desperate time for the winds of change have shifted. An old power is rising in the desert even as a new power is barreling across space to claim the planet for its own.

Nathan Bourne needs change but doesn’t know where to turn. The choice is stolen from him the night his partner is murdered by a pack of Berserkers who have discovered a portal between worlds. Nathan chases them back to Helscape and becomes trapped between the Berserkers and soldiers of the galaxy spanning Imperium. Only by teaming with Kane does he stand a chance of getting back to Earth. Even that might not be enough.

Tomorrow's Demise is an all new military science fiction adventure set on a desolate world filled with genetically created monsters and the dwindling local population fighting them.

Get your copy today and begin an adventure unlike any other.

Christian W. Freed was born in Buffalo, N.Y. more years ago than he would like to remember. After spending more than 20 years in the active duty US Army he has turned his talents to writing. Since retiring, he has gone on to publish 17 military fantasy and science fiction novels, as well as his memoirs from his time in Iraq and Afghanistan. His first published book (Hammers in the Wind) has been the #1 free book on Kindle 4 times and he holds a fancy certificate from the L Ron Hubbard Writers of the Future Contest.
Passionate about history, he combines his knowledge of the past with modern military tactics to create an engaging, quasi-realistic world for the readers. He graduated from Campbell University with a degree in history and is pursuing a Masters of Arts degree in Military History from Norwich University. He currently lives outside of Raleigh, N.C. and devotes his time to writing, his family, and their two Bernese Mountain Dogs. If you drive by you might just find him on the porch with a cigar in one hand and a pen in the other.