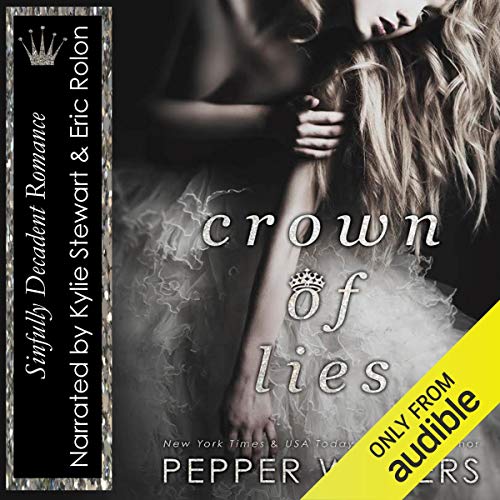 Noelle Charlston lives a fairy-tale life: a doting father, a powerful job, and a future blessed with financial security.

Broken-hearted from a teenage romance, Noelle's freedom is no longer hers. It belongs to the stranger her father believes is her perfect match. The stranger who pulls his lies over everyone he touches.

Seduced and manipulated, Noelle gives into the mysterious Penn Everett. The lies he spins, the truth he hides, the mystery he weaves - it's all enough to slowly erode the woman she is and turn her into something else.

Until her past collides with her present.

And it's her turn to lie.

Momma Says: 4 stars⭐⭐⭐⭐
Wow! Just... Wow! I'll be honest, I don't know whether I"m appalled, shocked, or awed - maybe a little of all three? I do know that Pepper Winters pulled me into this story and there was no getting away. The writing is reminiscent of something from the classics, something from a different time. I know it isn't, but the pacing and atmosphere feel that way. It also borders right on the edge of purple prose, of being just a little too much, a little too flowery, but for me, it suited the story and its characters. Elle is the type of character who would've irritated me had she not been so innocent and sheltered. And Penn? Holy smokes, Penn is something else. Should I like Penn? Absolutely not, and in real life, I wouldn't have anything to do with the likes of Penn Everett. But in the world the author has created for him, I can swoon over his way too arrogant self while I make guesses about his secrets.
And this is where I tell you that I thought I knew where this story was going, I thought I had it all figured out, and maybe I do, but that cliffy was so not what I expected. Okay, maybe part of it, like the very last bit, but not the other part - talk about a shocker! And when I listened to that last bit and got the little thank you bit from audible, I nearly lost it. I immediately bought the next part of the duet, and I'm trying to hold off until the weekend because I know I'm not gonna want to stop listening for anything so mundane as household chores and dinner.
The narration for Crown of LIes introduced me to a couple of new to me narrators, and it's done a little differently than I've heard. I've listened to duet narration several times, but we usually get something from both characters' heads. This book is written in first-person point of view from Elle's perspective. Kylie Stewart does everything except the male dialogue, and Eric Rolon does all of that, while Stewart does all the dialogue tags and body movement lines, as in Rolon narrates something Penn has said, and Stewart finishes with "he said." It was a little disconcerting at first, but once I settled in and got used to it, it worked. The only issue I had with the narration is that Eric Rolon is a little over the top with Penn in the beginning. I realize that Penn is arrogant, but he comes across sounding almost childish as he verbally one-ups others. I don't know if the narrator was uncomfortable with the character at first or what, but he did seem to settle into the role as the story progressed.
The story may be out there, and many things stretched my suspension of disbelief, but all things considered, this was one doozy of a listen, and I'll be impatiently waiting for the weekend to finish the duet.