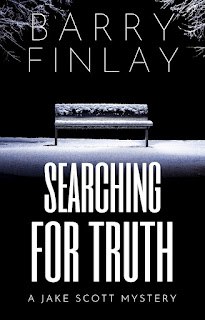 Former journalist Jake Scott is bored and lonely, having lost his wife and retired from his job. His daughter has moved with a boyfriend to another city. All that keeps him going is a weekly breakfast gathering with friends and a temperamental, overweight cat named Oliver. Things change when one of the breakfast attendees, a beautiful police detective with a troubled teenage daughter, suggests Jake should write a book. When he takes her advice and researches a convicted murderer’s case, he finds out something is terribly wrong. Could a member of the breakfast group be hiding a secret deadly enough to commit murder? Jake follows leads that uncover a disturbing rollercoaster ride of clues, all while his attraction for the detective grows. An attempt to force the true murderer out of hiding results in a terrifying ordeal on the coldest night of the year.

He paused, listening. Had the intruder heard? He tried to see the phone in the dark, but it wasn’t visible. Dammit! It must have slipped under the bench! He bent to search for it, but he would have to drop to his hands and knees to retrieve it. It was too late for that. Every sense was on full alert. Something crashed to the floor in the office. It sounded like a drawer from his desk. At least it meant the person didn’t know he was home yet. He had time to get out. The phone would stay where it was.

The intruder could burst from the office at any minute. Then Jake made his second mistake. He eased the closet door open and reached around the corner until his fingers closed on something solid. The move ate up precious seconds he could have used to leave. The object he sought was a stick he used to play street hockey with the neighborhood kids when Mia was still alive. He meant to give it to the kids long ago, but never found the time. Now, at least, he could use it to protect himself if he couldn’t get out fast enough. He left the closet door wide open as a barrier between him and the intruder.

Everything went black as Jake awkwardly fumbled for the lock with one hand while holding the stick with the other. The burglar had extinguished the flashlight. Jake held the stick in front of him as he reached behind his back for the lock. Gently diffused light lit the hallway through thin filmy material covering the sidelight beside the door, painting ghostly shadows on the walls and floor. Panic beckoned. Jake fought it off, but he couldn’t slow down the runaway freight train that was his heart. His eyes flew open when the intruder, head down and his eyes watchful for obstructions in the dark, turned the corner.

Jake stood face to face with a possible killer.

Momma Says: 4 stars⭐⭐⭐⭐
It's no secret that I like murder mysteries, thrillers, crime dramas, procedurals - basically, if there's a whodunit, chances are good that I'll like it. I also really like it when I can get invested in a character and follow them through a series. Barry Finlay gives me that in Searching for Truth. Jake Scott is likable and relatable, and the case for this first in the series is to find out if an innocent man is in prison for murder. Of course, the first in the series is going to introduce us to the main character and those around him, and Finlay does it quite well. We get a handful of secondary characters that I hope to see more of in future books along with a possible love interest and her teenage daughter. There's also the Ottawa winter for the setting, and it's described so well, I may have shivered a time or two. While all those "introductions" may seem like a lot of page time, they happen organically throughout the story, so there are no bothersome infodumps to distract from the case at hand. Speaking of, we're given a couple of red herrings to ponder over as Jake and Dani suss out who did what, and poor Jake gets more than he bargained for as a retired journalist looking for a hobby. That's as close as I'm going to get to spoiler territory, so I'll just sum it up by saying Searching for Truth was my first time reading Barry Finlay, but it won't be my last. I'll be watching for that next Jake Scott book. 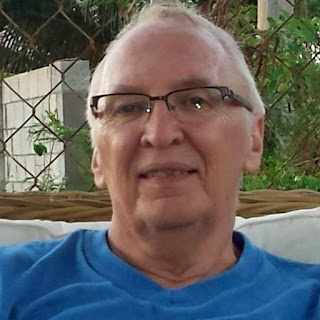 Barry Finlay is the award-winning author of the inspirational travel adventure, Kilimanjaro and Beyond – A Life-Changing Journey (with his son Chris), the Amazon bestselling travel memoir, I Guess We Missed The Boat and five Amazon bestselling and award-winning thrillers comprising The Marcie Kane Thriller Collection: The Vanishing Wife, A Perilous Question, Remote Access, Never So Alone, and The Burden of Darkness. His new novel, Searching For Truth, introduces the Jake Scott Mystery Series. Barry was featured in the 2012-13 Authors Show’s edition of “50 Great Writers You Should Be Reading.” He is a recipient of the Queen Elizabeth Diamond Jubilee medal for his fundraising efforts to help kids in Tanzania, Africa. Barry lives with his wife Evelyn in Ottawa, Canada.

Barry Finlay will be awarding a $15 Amazon/BN GC to a randomly drawn winner via rafflecopter during the tour.

a Rafflecopter giveaway
at November 10, 2021