✱✱Book Review✱✱ Blood in the Water: A True Story of Revenge in the Maritimes by Silver Donald Cameron 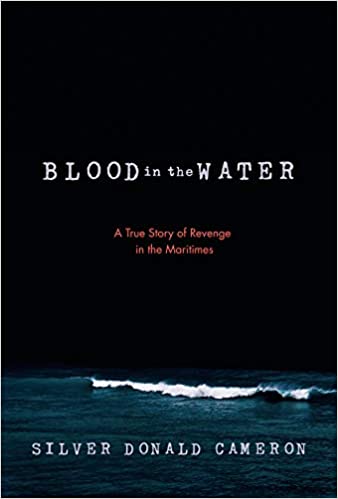 A brutal murder in a small Maritime fishing community raises urgent questions of right and wrong, and even the nature of good and evil, in this masterfully told true story.In June 2013, three upstanding citizens of a small Cape Breton town cold-bloodedly murdered their neighbour, Phillip Boudreau, at sea. While out checking their lobster traps, two Landry cousins and skipper Dwayne Samson saw Boudreau in his boat, the Midnight Slider, about to vandalize their lobster traps. Like so many times before, Boudreau was about to cost them thousands of dollars out of their seasonal livelihood. One man took out a rifle and fired four shots at Boudreau and his boat. To finish the job, they rammed their own larger boat over the top of his speedboat. Boudreau's body was never found. Then they completed the day's fishing and went home to Petit de Grat on Isle Madame.Boudreau was a Cape Breton original--an inventive small-time criminal who had terrorized and entertained Petit de Grat for two decades. He had been in prison for nearly half his adult life. He was funny and frightening, loathed, loved, and feared. One neighbour says he would steal the beads off Christ's moccasins--then give the booty away to someone in need. He would taunt his victims, and threaten them with arson if they reported him. He was accused of one attempted rape. Meanwhile the police and the Fisheries officers were frustrated, cowed, and hobbled by shrinking budgets. Boudreau seemed invincible, a miscreant who would plague the village forever.Cameron, a resident of the area since 1971, argues that the Boudreau killing was a direct reaction to credible and dire threats that the authorities were powerless to neutralize. As many local people have said, if those fellows hadn't killed him, someone else would have. Like Say Nothing, The Perfect Storm, The Golden Spruce, and Into Thin Air, this book offers a dramatic narrative set in a unique, lovingly drawn setting, where a story about one small community has universal resonance. This is a story not about lobster, but about the grand themes of power and law, security and self-respect. It raises a disturbing question: Are there times when taking the law into your own hands is not only understandable but the responsible thing to do?

Momma Says: 2 stars⭐⭐
I hadn't read a true crime in a while, and I don't remember hearing about this one, so I thought I'd dip my toes in the true-crime waters, so to speak. I'm thinking now that I should've skipped it for something a little more gripping. The first couple of chapters give us pretty much everything we need to know. The who, what, when, where, and why are all handed to us right upfront. That's really no surprise since it is true crime, but I was at least hoping for something more than the killers were caught and charged. They didn't even deny it, and according to the book, they weren't particularly hard to catch. Really? So, what more is there to tell? Unfortunately, the rest of the book is a bit of a hodge-podge of information I didn't really want or need. There is a lot of trial play-by-play, which is usually a big favorite for me, but this was rather dull, nothing more than I expected from what we already know. But I could've been okay with the trial stuff, it was all the filler that drove me to distraction and had me setting this one aside for later. We're given lots of information about the town and history of the area as well as more information about fishing than I ever wanted to know. I liked the author's writing style in the beginning, but this one just went off the rails for me somewhere along the way. It became much too easy to set aside and harder and harder to pick back up.