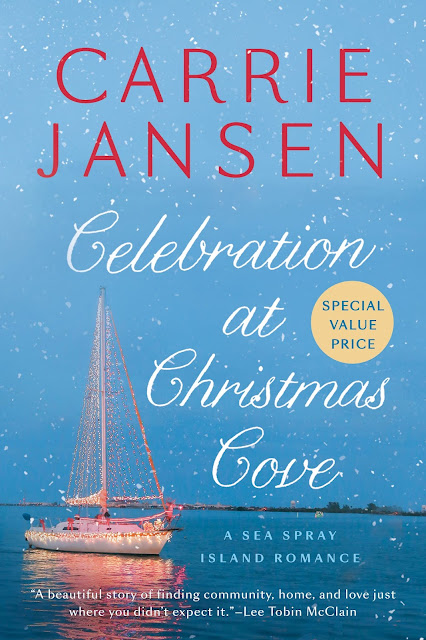 Acclaimed writer Carrie Jansen excels at delivering sweet and gentle romances that are sure to charm readers and make them believe in the healing power of love. This fall, Jansen makes her Berkley debut with the first installment of the Sea Spray Island Romance series.

CELEBRATION AT CHRISTMAS COVE (Berkley Trade Paperback Original; October 26, 2021) tells the heartwarming story of a grieving woman who can’t wait to leave a wintry New England island, and a widower who would do anything to stay.

Travel magazine writer Celeste Bell is in a terrible mood. Not only was her flight to the Caribbean diverted to a Massachusetts island, now it looks like she’ll have to spend Christmas there. Single and still mourning the loss her mother a year earlier, Celeste is desperate to avoid any emotional entanglements and all holiday festivities. She just doesn’t feel like celebrating.

But that’s exactly what community center executive director Nathan White and his young daughter, Abigail, want to do. Nathan is entirely focused on making sure that his daughter has a happy Christmas, especially with the knowledge that if he can’t raise money for the community center soon, it will close and they’ll have to leave the island. When he meets Celeste, Nathan begins to feel a connection and wonders if he’s brave enough to risk his heart once more.

Thawing their frozen hearts and saving the community center will require a Christmas miracle. But tis the season…

Momma Says: 4 stars⭐⭐⭐⭐
If you're not in the Christmas spirit before cracking this one open, you will be by the time you finish it. Celebration at Christmas Cove is an absolutely charming read. It's sweet and fun, and I loved the idea of this woman trying to get away from Christmas and ending up smack in the middle of a whole town full of it. Of course, our main characters are Celeste and Nathan, along with Nathan's scene-stealer daughter, Abigail. But this one is full of quirky characters to fall in love with, so I'm really glad it's the start of a series because this is a town I didn't want to say goodbye to. There is a bit of angst in the romance by way of some miscommunication or lack of communication - you know, the kind that makes you want to give a character a good shake and tell them to just say it for crying out loud. So, to sum it up, we have terrific characters, Christmas spirit, romance with a little angst, and a town that is practically a character in its own right. Carrie Jansen is new to me, but I hope to be seeing much more of her and Sea Spray Island.
🞿🞿🞿🞿🞿

“You’re bumping me?” As a writer for an elite travel magazine, Celeste Bell had virtually flown around the world over the course of the past seven years and she’d never been bumped from a flight. She knew it was bound to happen sooner or later; she just didn’t want it happening now.

“We paged you three times, but since you weren’t at the gate for initial boarding, we assigned the seat to another passenger,” the agent explained.

Celeste wasn’t at the gate because she’d had to bring her luggage to the ticket counter after changing out of the ugly sweater she’d worn to her office holiday party earlier that day. This season, she’d been avoiding Christmas festivities like the flu, but since participation was mandatory, she reluctantly donned the most hideous apparel she could find: a fluffy, white sweater with a cartoonish fir tree emblazoned across the front. The tree was crowned with a blinking LED-powered star, and a dozen miniature, multicolored sleigh bells were strung from its boughs with silver tinsel. The sweater bore an uncanny resemblance to a yuletide craft Celeste had made in first grade from a paper plate, cotton balls, glitter and various geometric shapes cut from red, green and yellow felt. Oh, the things she did for the sake of her career.

“I get it. Symbolism,” Brad, the college intern, remarked. Holding a plastic cup of eggnog in one hand and a chocolate mint brownie in the other, he gestured toward her midsection with his chin. “You chose that sweater because your last name’s Bell, right?”

The bells were actually Celeste’s least favorite part of the sweater, which was saying a lot. Whenever she walked from her cubicle to her boss’s office or to the break room and back again, their jingling made her feel like a Clydesdale horse—it didn’t help that she’d gathered her long, thick blond hair into a high ponytail—and drew increasingly annoyed looks from her coworkers over the course of the day.

She intended to switch wardrobes before a colleague drove her to Logan International Airport, but at the last minute, the magazine’s editor in chief, Philip Carrington, tasked Celeste with proofreading Brad’s post about the Boston Harbor Holiday Cruise. And by proofreading Philip meant rewriting. Brad’s draft was so poorly structured, it took Celeste half an hour to reword it, and by that time her coworker was threatening to leave without her.

When she arrived at the airport, Celeste wheeled her luggage into the restroom so she could change. She removed her heavy winter coat, scarf and gloves, and she stuffed them into her suitcase, along with her socks and shoes. Then, she opened her smaller carry-on and checked to make sure she had a travel blanket with her before adroitly exchanging her slacks and ugly sweater for a casual slate-blue swing dress and crochet cardigan. Finally, she slid her feet into a pair of canvas sneakers. Celeste intended to be ready for the tropical Caribbean temps the moment she stepped off the plane.

But first she’d have to step onto the plane.

“Are you sure there aren’t any seats left?” It was an inane question, and Celeste could hear the whine of desperation in her own voice.

“I can book you on the eleven-thirty-six flight tomorrow morning. Of course, we’ll compensate you for the inconvenience, as well.”

Tomorrow was December 20. Technically, Celeste didn’t need to be in the Caribbean until first light on December 23. That’s when the Christmas carnival—or simply carnival, as it was called—for the particular island she was visiting kicked off a daybreak street party known as j’ouvert. The trip was a mix of business and pleasure; after taking a couple days to enjoy a much-needed break, Celeste would spend December 23, 24 and 25 attending carnival and describing its highlights in a Christmas Day post on the magazine’s blog. That meant if she didn’t leave Boston until almost noon tomorrow, she’d squander nearly a full day of vacation. Even so, Celeste cared less about that than she did about the weather forecast, which warned that a nor’easter was brewing. If it followed its projected course, the storm could pack a wallop in terms of snow accumulation, and who knew how that might affect air travel for the next few days. She couldn’t risk it.

“Would you check for flights on other airlines, please?”

The agent’s fingernails clicked against the keyboard, her expression impassive. After what felt like an eon, she said, “If we hurry, I can book a seat for you on a flight with our partner airline, IslandSky. There would be a brief layover on Sea Spray Island—”

“I’ll take it,” Celeste said as the woman continued to speak.

“Yes, thank you, that’s what I want to do.” Celeste didn’t care about the small print, she just needed to get on that flight.

A few more minutes of keyboard clicking and then Celeste was off and running, dodging fellow travelers and circumventing airport vendors as she darted toward Terminal C with her carry-on bag in tow, the sweater inside it jingling all the way. As she ran, she recognized it wasn’t really the need for an extra day of relaxation that spurred her on. Nor was it solely that she’d made a professional commitment to cover the carnival. No, what really urged Celeste forward was the fear that if she didn’t leave now, right now, it would be too late and then there’d be no escaping for Christmas.

And escaping was her primary purpose in volunteering to immerse herself in a Caribbean carnival while all of her coworkers were celebrating Christmas with their families. From the rollicking parades and music, to the lively dancing, vibrant costumes and mouthwatering food, the carnival wasn’t likely to evoke memories of the calm and cozy but joyful Christmases that Celeste used to celebrate. On the contrary, going to the Caribbean would keep her from thinking about how it had been just over a year since her mother passed away. And it would take her mind off the fact that she was still lonely. Still alone.

Or maybe it was the exertion of tearing through an overly dry, hot and crowded airport trailing an unwieldy piece of luggage in her wake. As fit as she was, by the time Celeste arrived at her gate she was gasping. Light-headed, she hardly registered that the descending ramp the agent directed her to follow led outside to ground level where the plane awaited her on the tarmac.

Celeste skidded to a standstill. The realization hit her like a gelid gust of air: it’s a prop plane. When it came to prop planes or Christmas festivities, it was almost a toss-up as to which distressed her more. Almost but not quite. Pressing her dress flat against her legs so it wouldn’t fly up in the wind, Celeste numbly soldiered forward, the end of her ponytail lashing sideways at her face.

She climbed the four ladder-like steps and entered the dimly lit interior where a flight attendant—or was he the copilot?—reached to take her carry-on for stowing while simultaneously issuing safety instructions. Overcome with either regret or relief, Celeste plunked herself into the seat closest to the door, fastened the buckle around her waist and closed her eyes. She was finally on her way.

From CELEBRATION AT CHRISTMAS COVE published by arrangement with Berkley, an imprint of Penguin Random House LLC. Copyright © 2021 by Carrie Jansen.

Carrie Jansen earned an MFA in creative writing and published many poems and short stories before becoming a novelist. An avid bodyboarder and beach walker, she spends as much of the year as she can on Cape Cod, where she draws inspiration for her contemporary romances. She also writes Amish romance novels under her pseudonym, Carrie Lighte. Learn more online at carriejansen.com.