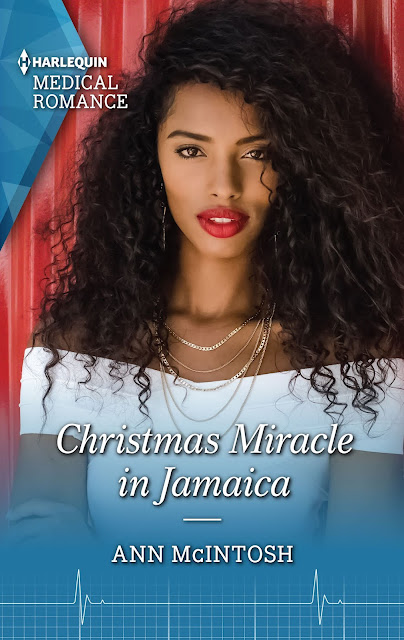 This first story in The Christmas Project series sees neurologist Chloe Bailey and surgeon Sam Powell reunited in beautiful Jamaica, where they have to face the consequences of that one hot night!

’Tis the season For surprises!

One unforgettable night with surgeon Sam Powell signaled a newfound independence for freshly divorced neurologist Chloe Bailey. She never thought she’d see Sam again, until a new assignment takes her to stunning Jamaica for Christmas and Sam is there, too! But when Chloe discovers she’s pregnant, it’s life-changing for both of them! Sam will always be the father of her baby, but is he about to become a whole lot more?

Add Christmas Miracle in Jamaica to your Goodreads!

Momma Says: 4 stars⭐⭐⭐⭐
It's Christmas in Jamaica for this surprise baby medical romance. Shew! That's a lot crammed into a relatively quick read, but it all comes together pretty well. I would've liked to have seen more of the medical side of things since this is categorized as a medical romance. That aside, I enjoyed the story. I like the surprise baby trope, and I liked the way it was handled by Ann McIntosh. Chloe and Sam do have plenty of emotional baggage to work through, so there is some angst, but I liked them as a couple. And of course, there's Jamaica, which makes for a great setting. Who wouldn't want to spend Christmas in Jamaica? Sadly, it's not in the cards for me right now so I'll have to live vicariously through fun characters and entertaining stories like this one.
🞿🞿🞿🞿🞿

Waking up five thousand miles away from her London home to her solicitor’s text saying the entire ordeal of getting free from Finn was over had made her equal parts sad and relieved. Finn had fought the divorce every step of the way, making what should have been a straightforward matter into a circus. Creating discord, spouting ridiculous demands and accusations, trying to force Chloe to go back to him rather than go through with severing the marriage.

She hadn’t cheated or lied. Finn had. Yet here she was, left holding the bag.

As she twisted the empty glass back and forth between her fingers, she heard her grandmother’s voice, clear as day, as though the older lady was beside her and whispered into her ear.

“Anyone who thinks life is always going to be easy is a jackass. When things get tough, lift up your head and look for the advantage. There’s always one, but usually you have to seek it out.”

That was Gran’s reaction anytime one of the family was dispirited or gloomy, but the familiar refrain rang hollow now.

“What possible advantage could there be to this mess?” she muttered.

But her brain was already whirring, putting aside the depressing, self-pitying thoughts and searching for the elusive silver lining.

Professionally, the breakup hadn’t changed anything. Her position at the Royal Kensington Hospital was both secure and rewarding, and the cutting-edge research she was involved in gave her a great deal of satisfaction. It was personally that she’d suffered, and perhaps that was where she could benefit?

All her life she’d been so careful, terrified of diminishing her good name, constantly aware that her parents expected her to set the best possible example for her younger siblings. Well, much of that had gone out the window over the last couple of years, leaving her…

To do things she’d wanted to but shied away from because they were risky or could potentially make others think less of her.

She’d always been so careful, so conservative and conventional. Wasn’t it time she let loose a little?

“Can I get you another tonic water?”

Startled, Chloe looked up at the bartender, and instinctively nodded. “Yes, thank you.”

She wasn’t ready to retire to her lonely hotel bed, knowing she’d only lie sleepless while she wrestled with all the ramifications of the life-changes she was going through.

But as the other woman began to turn away, Chloe was struck by a totally different type of impulse.

“Wait,” she said, causing the bartender to pause. “Do you serve mojitos?”

“Sure,” the woman replied with a smile. “Wouldn’t be a real bar if we didn’t.”

“I’ve always wanted to try one,” Chloe said, ignoring the whisper in her head telling her she rarely drank and she should be more careful, here in a strange city with no one to watch out for her.

“One mojito, coming up,” the bartender said, her smile widening.

When her drink came, she silently toasted her grandmother and her own quiet revolution, determined to make up for all the lost years of being so timid she’d forgotten how to actually live.

And when she found her gaze snagged by that of a very handsome man sitting across the bar, she refused to give in to the impulse to look away. Instead, she kept her eyes locked on his and raised her glass once more to her lips to sip the delicious liquid.

Then, as the gentleman in question rose and began to make his way toward her, she let herself smile, just a little, feeling excitement quicken her blood.

I was born in the tropics, Jamaica to be precise, lived in the frozen North (Ontario, Canada) for a number of years, and now reside in sunny central Florida with my husband. I'm a proud Mama to three grown children, love tea, crafting, animals (except reptiles!), bacon, and the ocean. I firmly believe in the power of romance to heal, inspire and provide hope in our complex world.