Title: Just So Many Places

Marissa and Calypso have been outsiders before. As an interracial lesbian couple from very different social classes, they’ve already experienced the odd stare. When the couple arrives on a sheep farm, tucked away in the jagged mountains of Iceland, they plan to forget all their baggage and look to the future.

Marissa, an academic on sabbatical, focuses on taking care of the sheep while attempting to work on her book on Norse mythology. Calypso, an attorney, who works on civil rights cases in New York City, attempts to help her clients while in the middle of nowhere in Scandinavia—quite a feat for any social justice warrior. The added distractions of Marissa’s son Xander, who drops in on them with his entitled college friends in tow, and the constant interruptions from Marissa’s wealthy and connected ex-husband, threaten their peace. As her civil rights cases gain notice in New York City, Calypso starts to feel left out, living so far away.

Two young girls enter Marissa and Calypso’s lives, complicating the solid ecosystem they’ve created in their hideaway. Tavy, grew up in the same inner-city poverty that Calypso came from, and with Calypso’s help, she has the talent and intelligence to lift herself up, even when an unplanned pregnancy threatens her future. When Asta Sollilja, an Icelandic teenager with a reputation, finds herself in trouble, she relies on the kindness of the American outsiders to keep her safe.

Just So Many Places captures the majesty and isolation of Iceland. It explores the enduring connections that come with unstoppable love and a sense of history as notions of race and class structures threaten to divide instead of connect. Marissa and Calypso must decide if staying in Iceland is for them or whether they can do more good by going home and rejoining the world where they feel most at home.

Calypso knew the coffee was good, not as good as they had in New York, not even as good as her grandmother’s coffee in Haiti, but it was earthy and natural—a lot like this country her wife had dragged her to. A year, she’d said. It was only a year, even if they were buying the place.

“If your work is too important,” Marissa had added, “I totally understand—you can stay in the city. I’ll come, maybe for a couple of weeks in the fall. I’ll be back for the winter. I don’t think I can brave the Icelandic winter, not the whole time. Or you could visit.”

It had taken Calypso a while to realize that when Marissa capitulated, when she suggested they live apart for a while, she was not being vindictive, only accommodating, as if she had to, at each and every juncture, apologize for something.

“I thought it would be colder in the house,” Calypso said as they situated themselves in their new kitchen.

“They have heat; this isn’t the dark ages. You remember Reykjavík last year.”

“It’s forward thinking to have heat?” Marissa laughed. “I guess, if people have heat in subzero weather, then they might get too comfortable, and who knows what kind of hijinks will ensue.”

“Who knows what kind of hijinks.” Calypso sighed, smiling softly to herself as Marissa took another sip of her coffee, then pushed her long, red hair back behind her ears.

Even at forty-four, she’d get up in front of her colleagues and spout all that jargon no one outside her field could understand, smiling sweetly, like a girl half her age. And her skin was clear. She used to talk about that. “Smooth skin runs in my family,” Marissa had said one night while they were getting ready for bed. She’d slathered on one kind of cream after another—gels and collagen pills, stuff under the eyes to prevent bags and dark circles, the works. But she swore she’d gotten her great skin from her mother.

“My mother’s face barely aged until she hit seventy, same with my grandmother.”

“My dad worked in an office his entire life. My mother was a teacher. It was that Wade—” Marissa had made a face at the mention of her asshole ex-husband.

“That husband,” Calypso had said.

But Marissa did have great skin, with her clear peaches-and-cream complexion, her red hair. Maybe it was because of how pleasant, how apologetic Marissa was that made it hard for people to take her seriously upon arrival. Then she started spouting words like “postmodernist literary theory,” and they held their tongues.

“In any case, they make good coffee in Iceland,” Calypso said, returning to the present. “I was expecting everything to be a little more rustic.”

“I got this coffee in the city. It is…it will be rustic here. We’ll have to hike six miles in the snow, uphill both ways, to get to the stores for provisions.”

“Funny,” Calypso replied, taking the cup Marissa had just drained and placing it in the sink. She started the water. It sputtered for a second (now that was rustic) before it sprayed extra hard on her skin. At least it was clear. Back when she’d visit her grandmother in Carrefour Ouest, she’d have to wait five whole minutes for the water to come out of the tap.

“Let me,” Marissa said, draping her arms around Calypso’s waist.

Calypso noticed she wasn’t wearing any perfume, but the scent of strawberries was always in the air whenever Marissa was around. Calypso continued washing the dishes, dripping some of the dark orange liquid soap, the same earth color as that ugly couch in the living room, on the sponge. She wasn’t sure how she was going to live with all this orange. Some redecorating was in order—once they found the time. It was a new sponge. They’d picked it up at the store off the highway before they got in. But it seemed old, one of those large old-fashioned kinds her mother used to scrub the stairs in their house in Kingsbridge, where they lived before her family moved to the North Bronx.

Marissa’s lips pressed against her neck, and she ran her hand down the side of Calypso’s arm as she continued washing. Her fingers moved softly at first, and then she held on more tightly, her nails digging in. Calypso finished the final cup (it didn’t take much) before she turned around.

“This rustic air suits you,” she said, running a damp hand down her wife’s exposed arm.

“Thank you for coming,” Marissa repeated in that apologetic voice. “I know your work, and it’s so important right now, and what you’re doing—”

“Sh.” Calypso stroked her face. “My work will get done. Gail’s got it under control. I can fly back; I know what I’m doing.”

“But your work is so important.”

“It’ll get done, baby,” Calypso said. She kissed her softly at first; it was always so soft. Calypso wondered sometimes if she might break her. “I need you. I need you to be happy, and here you are in this tiny, cold country, and you’re happy. And we have a pretty large farm, and there’s still New York to go home to, still all of that, and it’s only a year. You think the movement will be over in a year? Do you think young Black men will stop getting shot in the street or thrown in jail for bullshit reasons? You think I’ll miss it all? Because I’d take that trade. I’d miss the whole fight, not be responsible for changing a thing, if it meant the fight only lasted a year.”

“I’m aware,” Marissa said, still a hint of apology in her voice. But she kissed Calypso harder now; there was so much need in her. 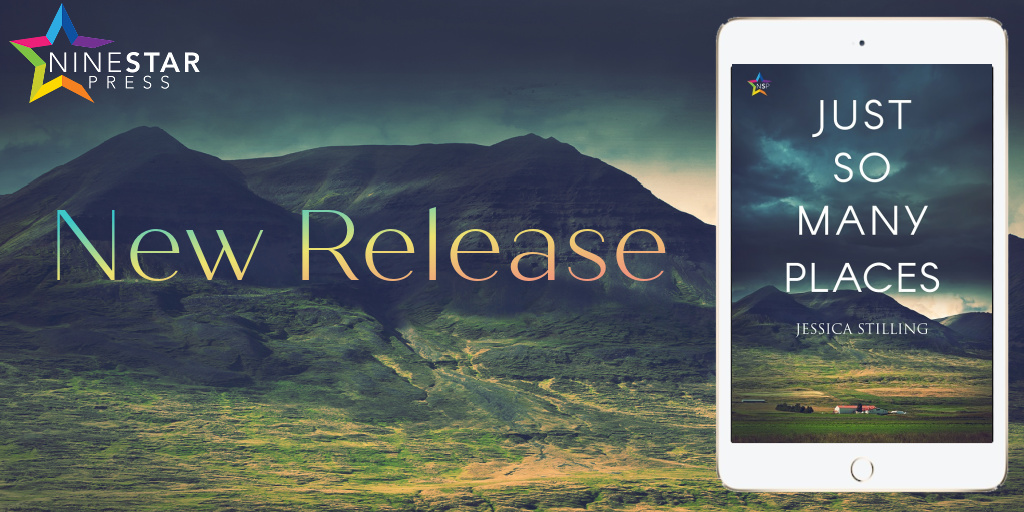 Jessica Stilling is unapologetically fond of Iceland. Just So Many Places, her first novel with NineStar Press, was penned while spending some time alone in Iceland. Jessica is a fan of Scandinavian crime dramas and Viking lore. She studied Greek and Roman mythology in graduate school but soon discovered the Norse gods and has not looked back.

Jessica has published three other literary novels, Betwixt and Between (IG Publishing), The Beekeeper’s Daughter (Bedazzled Books), and The Weary God of Ancient Travelers (DX Varos). She has also published three fantasy novels under the pen name JM Stephen. Jessica’s young adult fantasy series The Pan Chronicles was recently nominated for a Hugo Award. She has been reviewed by Kirkus Reviews, The San Francisco Book Review, Publishers Weekly, and Booklist, where she received a starred review.

Jessica’s journalism tends toward the feminist lens, and she has had articles published in Ms. Magazine, Bust Magazine, The Whorticulturalist, and The Writer Magazine. She also does freelance work for The Deerfield Valley News out of Wilmington, VT.

Jessica grew up in Northern Illinois and lived in New York City for eighteen years before running off to bucolic rural Vermont the fall of 2021. Jessica currently lives in a house in the Green Mountains with a lot of land and a large barn which is currently occupied by twenty or so chickens.