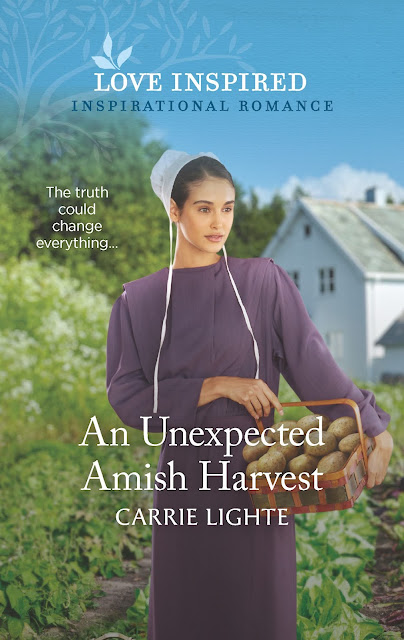 But it’s the only way to heal her heart.

When Susannah Peachy returns to her grandfather’s potato farm to help out after her grandmother’s injured, she’s not ready to face her ex-beau. But with Peter Lambright pitching in to harvest her grandfather’s crop, she can’t avoid him. For his family’s sake, Peter can’t tell Susannah why he had to leave her. But sharing his secret could make all the difference for their future…

Add An Unexpected Amish Harvest to your Goodreads!

Momma Says: 4 stars⭐⭐⭐⭐
Forgiveness is the central theme for An Unexpected Amish Harvest. It's also a story of learning that things aren't always how they seem. I'm fairly new to Amish romances, having only started reading them within the last year, and I've found that I enjoy them even more than I'd expected. This one has such a great theme, and the characters are easy to like and root for. The romance is full of miscommunication, so trust is another lesson for these characters. The story is a quick read, easily read in an afternoon, and I completely enjoyed this couple's journey. It is the second book in The Amish of New Hope series, but speaking as someone who hasn't read the first in the series, I'd say it can easily be read as a standalone. That said, I intend to check out that first book while I'm waiting for whatever's next from Carrie Lighte.
🞿🞿🞿🞿🞿

When Susannah stayed in New Hope last summer, she had quickly formed a close friendship with Dorcas Troyer. The two young, single women had enjoyed each other’s company again when Susannah returned to New Hope for a week at Christmastime, and they’d written to each other frequently throughout the last year.

Peter wouldn’t give me any reason for ending our courtship, other than to say he doesn’t think we’re compatible, after all. But I know it’s because I’ve gained so much weight since last summer.

Her friend had written back,

I’ve known Peter for years and I can’t believe your weight is such an issue for him. Are you sure that’s why he broke up with you? Could it be that he just finds it too difficult to carry on a long-distance courtship?

Susannah highly doubted that. After she’d left New Hope the first time, Peter’s biweekly letters had been filled with proclamations of his affection for her. The couple had called each other at their respective phone shanties at three o’clock every other Sunday. Even after two hours of talking, they’d never run out of things to share and laugh about. And although they had only been able to sneak off for an hour with each other when Susannah came to New Hope last Christmas, they’d agreed their time alone together was the best part of the holiday.

That’s why it was so confusing that four days after she got home, Peter called and said he had decided to end their courtship. The change in his attitude was so abrupt it made Susannah feel as if he was an utter stranger. As if someone else had been pretending to be him on the phone and in his letters. Had been pretending to fall in love with her the way she’d been falling in love with him.

“Why?” she had cried, as bewildered as she was devastated. “I don’t understand.”

“But why aren’t we a gut match? What has changed all of a sudden?”

“I’m sorry to hurt your feelings like this, Susannah, but I don’t want to discuss it further. Please accept my decision.”

Afterward, she went over it and over it in her mind, trying to figure out what could have possibly changed to make Peter end their relationship. The only thing she could come up with was that once he’d seen her again, he was no longer drawn to her because of how much heavier she’d gotten. Maybe that was why he’d held his tongue about his reason; he hadn’t wanted to hurt her feelings by telling her the truth. But whether he said it aloud or not, she’d been crushed to discover that Peter valued how she looked more than who she was. That he was rejecting her because of her weight gain.

Likewise, in the following months she was disappointed when certain other men accepted her because of her appearance. During the past spring and summer, she’d had no fewer than four bachelors in Dover ask to court her. Susannah would have felt honored, if it hadn’t been for the fact that they’d all known her for at least ten years and they’d never expressed an interest in her until she was slender.

Carrie Lighte enjoys traveling to Amish communities across the United States and she hopes to visit a few in Canada soon, too. When she isn't writing, reading or researching, she likes to hike, kayak and spend time at the beach.